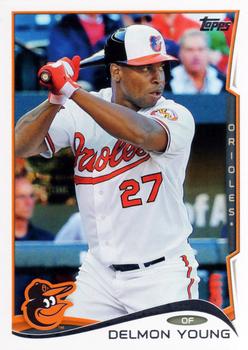 Want an example of a roaring crowd? Look no further than the afternoon of October 3, 2014, when the Baltimore Orioles rallied past the Detroit Tigers, 7-6. It was a day on which former Tiger Delmon Young continued his postseason magic to help the Orioles, who were back in the playoffs after a one-year hiatus that followed a five-game Division Series loss to the New York Yankees in 2012.

The Tigers also were itching to break through, having dropped the American League pennant playoff to the Boston Red Sox the previous October, the 2012 World Series to the San Francisco Giants, and the 2011 ALCS to the Texas Rangers.

Game Two of the 2014 Tigers-Orioles Division Series was scheduled for Camden Yards less than 24 hours after the Orioles set a club postseason scoring record in a 12-3 victory.1 Baltimore beat Tigers starter and reigning Cy Young Award winner Max Scherzer, with a boost from an eight-run eighth inning.

The second game started just past noon and the Orioles faithful were in full throat that Friday hoping Taiwanese left-hander Wei-Yin Chen could best Detroit’s Justin Verlander, who in 2011 had won the Cy Young and MVP Awards.

Chen kept the Tigers scoreless for the first three innings while the Orioles reached Verlander in the third when Nick Markakis’s line drive hit just above the wall in right and ricocheted onto the field. Crew chief Jeff Kellogg checked with the replay crew, who upheld the umpire’s call: two-run homer and a 2-0 Baltimore lead.

But Baltimore’s edge evaporated half an inning later when the first five Detroit batters reached and the Tigers grabbed a 5-2 lead. Before Chen hit the showers, J.D. Martinez and Nicholas Castellanos homered back-to-back. Kevin Gausman relieved and wound up throwing 3⅔ innings of one-run baseball.

Meantime, J.J. Hardy’s RBI single in the fourth cut the Detroit lead to 5-3 in favor of Verlander, who departed one batter into the sixth for Anibal Sanchez.

Gausman’s runs-allowed total could have climbed higher but for stellar defense in the eighth. Victor Martinez doubled off the center-field wall to score Torii Hunter but Adam Jones fired the ball to Jonathan Schoop, whose relay to Caleb Joseph nailed Miguel Cabrera trying to score from first.2 The play kept the score 6-3, Detroit, for eventual winner Brad Brach, who got the final two outs. The play at the plate was also a key to the last half of the eighth.

The Tigers looked to preserve the lead and tie the series behind their relievers. First up was Joba Chamberlain, who tipped his cap to the lively Baltimore crowd as he entered from the center-field bullpen.3

Chamberlain’s nod to the fans might have been his top moment of the day. With one out, he hit Jones with a pitch and surrendered consecutive singles to Nelson Cruz and Steve Pearce that scored one run and left a mess for Joakim Soria. Hardy then walked to load the bases and bring up Delmon Young, who, despite being a right-handed batter against a right-handed pitcher, was Baltimore manager Buck Showalter’s choice to pinch-hit for lefty-swinging Ryan Flaherty. Asked why he used Young in that spot, Showalter said, “He’s a professional hitter. … You can hang your hat on a professional hitter.”4

Showalter probably also knew that Young was 10-for-20 as a pinch-batter in his first season with the Orioles, his fifth team in a 10-year career. And it probably was no surprise that Young wasted no time as he owned a .425 first-pitch batting average in 2014.5

“He’s a fastball hitter, he swings at the first pitch,” said Soria, the losing pitcher. “I threw a slider, and he was on it.”6

With the Baltimore fans in full deafening-sounding mode, Young’s line drive skipped to the left-field wall, where J.D. Martinez fielded the carom. Cruz, Pearce, and Hardy scored – and the noise from the crowd of 48,058 could be heard from Western Maryland to the lower Chesapeake Bay.

After Brian Anderson told the national cable audience on TBS that “the legend of Delmon Young in the postseason continues,” color man and former big leaguer Joe Simpson noted that Martinez made a telling bobble that helped Hardy beat the relay from Ian Kinsler. “It took him two grabs to pick it up and that was the difference at home plate,” Simpson said.7

Meantime an amazed Caleb Joseph watched from the on-deck circle. “It’s still the loudest roar I think I’ve ever heard in my life,” he told MLB.com a few years later. “It felt like the stadium was moving because so many people were excited about what was going on.”8

As the fans buzzed, Young maintained a level outlook. “I’m always comfortable in the batter’s box,” he told the press after the game. “It doesn’t matter whether I haven’t had a hit in a while or I’m 10-for-10.”9

Zack Britton retired the Tigers 1-2-3 in the ninth for the save, sending the series to Detroit, where the Orioles polished off the sweep with a 2-1 victory two days later. Cruz, who finished the series with six hits and five RBIs, cracked a two-run homer off David Price to make the difference.

Young’s rousing hit and the series victory over Detroit were high points for the Orioles, who were swept by the Kansas City Royals in the ALCS, missed the playoffs in 2015 and then dropped a controversial AL wild-card game in Toronto the next year. Showalter will forever take heat in Birdland for not using Britton against the Blue Jays, who won 5-2 in 11 innings. The Orioles then slid into oblivion with sub-.500 years that included 100-loss seasons in 2018 and ’19.

Meantime, the Tigers endured losing for the next five years after the postseason loss to the Orioles, finishing 2019 at a baseball-worst 47-114.

Young went 0-for-3 with two strikeouts for the Orioles against Detroit in the series finale at Comerica Park before getting one hit and one RBI in two games of the ALCS loss to the Royals. That completed a run of six consecutive playoff years for Young, whose October résumé included becoming the first player with four game-winning RBI in one postseason series when he helped the Tigers sweep the Yankees for the 2012 AL flag.10

Young’s strong postseasons never translated to his private life. He was baseball’s number-1 overall draft choice in 2003 of the then Tampa Bay Devil Rays, but never quite clicked in a decade-long career. He served a 50-game suspension from the minor leagues for flinging a bat that hit an umpire in 2006, sat out for seven days after he harassed people on a New York City street in 2012, and was arrested and charged with battery in Miami in 2016.11

The Orioles kept Young in 2015 but he lasted just 52 games before his release on July 9. Although just 29, he never played in the major leagues again. Less than a year earlier, his playoff lightning bolt made Camden Yards the perfect example of where to find a roaring crowd.

In addition to the sources cited in the Notes, the author relied on Baseball-Reference.com and Retrosheet.org for box scores and series summaries.