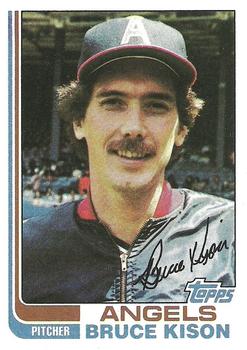 He “pitches with such intensity that he ought to be declared a fire hazard,” gushed sportswriter Mark Littwin after Bruce Kison’s dominant five-hit complete-game victory, while California Angels teammate Reggie Jackson described him “as so mentally tough, he’s a ball of fire.”1 Kison touted his coolness under pressure as a product of his postseason “experience” as a member of two Pittsburgh Pirates World Series championship teams. Cribbing how he mesmerized the vaunted Brewers sluggers with his slider, the hurler said, “I used it inside and outside and from different angles.”2 Kison was “a deceptive pitcher with that motion,” declared Paul Molitor. “He had us chasing a lot of bad balls. We didn’t give ourselves much of a chance.”3

Skipper Harvey Kuenn’s Brewers (95-67), known as Harvey’s Wallbangers for their big-league-most 216 home runs in the regular season, were slumping and the timing couldn’t have been worse. They lost six of their last nine regular-season games, but beat the Baltimore Orioles in the season’s finale to capture their first AL East crown. The Angels (93-69), on the other hand, rolled into the ALCS having won 16 of 23 games, and took the first game, 8-3, behind a complete game by 39-year-old Tommy John, a September acquisition from the New York Yankees.

Scheduled to start the second game in Anaheim was Kison, a whip-like 6-foot-4, 175-pound right-hander, who might have seemed like a curious choice were it not for his noteworthy late-season success throughout his career. He had a 95-75 record in his 12-year big-league career, but was 28-10 in regular-season games in September and October. He also sported a 4-1 record with a 2.01 ERA in the playoffs, all with the Pirates. Since signing with the Angels before the 1980 season, Kison had been plagued by injuries, notched only four wins in his first two campaigns with the club, and underwent potentially career-threatening operations on his wrist and elbow. Kison started out strong in ’82, going 6-3 before suffering a bruised knee on a line drive back to the mound by the Texas Rangers’ Johnny Grubb on June 22. He returned a week later, but things got testy with his skipper, the notoriously hotheaded Gene Mauch, who claimed the hurler was still hurt. Whether that was the case or if Kison was in Mauch’s doghouse, the result was an “inexcusable 82-game residency in the bullpen,” opined Angels beat reporter Ross Newhan in the Los Angeles Times.4 “I would have liked to have had more innings,” quipped Kison, “but personal feelings are overrated.”5 With the Halos clawing for the crown, Kison moved back into the rotation on September 14, blanked the Chicago White Sox on seven hits, and sported an impressive 1.67 ERA in 32⅓ innings in his last four starts.

On the mound for the Brewers was their staff ace, Fu-Machu-wearing Pete Vuckovich, the ’82 Cy Young Award recipient with an 18-6 record. After hurling an 11-inning complete-game victory against the Boston Red Sox on September 20, big Vuck had been shelled in his last two starts, surrendering 10 earned runs in 11 innings. Rumors swirled that he had an injured right wing, but Kuenn cautioned everyone that it was just a “tired arm.”6 Vuckovich was 5-0 lifetime against the Angels, including 3-0 in ’82.

Anaheim Stadium, the Big A, was packed with 64,179 spectators on a gorgeous early fall Wednesday afternoon. The Brewers swung for the fences, but so too did the Angels, finishing with 186 round-trippers, second in the majors behind the Wallbangers; however, the Halos also employed small-ball tactics, and this game featured both strategies.

The Angels struck first when they loaded the bases in the second with one out. Fred Lynn led off with a bloop single and caught a break when center fielder Gorman Thomas “broke back,” noted Newhan, and had no play on the ball.7 Doug DeCinces doubled with one out and Bobby Grich was hit by a pitch. After Tim Foli, Kison’s teammate on the ’79 “We Are Family” Pirates, lined a single for the first run, Bob Boone surprised the Brewers by laying down a squeeze bunt for another run.

The defensive play of the game occurred in the third inning, though at the time its importance to the game’s outcome was not yet known. The Brewers’ Charlie Moore led off with a single and moved up a station on Jim Gantner’s grounder. Molitor singled up the middle, but shortstop Tim Foli made a spectacular diving stop to save a run. “There’s no question in my mind that [Moore] scores because he’s breaking with contact,” lamented Molitor. “That leaves us with the tying run on first with Robin and Cecil coming up.”8 Kison retired Robin Yount, the ’82 AL MVP, and Cecil Cooper to end the threat.

In the bottom of the frame, Reggie Jackson made his presence felt by smashing a home run well over the 404-foot marker in center field. It “caromed off the canvas batter’s eye,” reported Newhan, to give the Angels a 3-0 lead. The blast was Mr. October’s 18th in the postseason, tying him with Mickey Mantle for the most in baseball history, though Mantle’s home runs were all in the World Series. “Reggie’s hit came on a fastball right down the chute,” said Vuckovich. “I know he was looking for it and I got it up a little more than I wanted.”9

It was back to small ball in the fourth for the Halos. After DeCinces and Grich led off the frame with a walk and single, respectively, Foli’s bunt moved them into scoring position. Boone followed with a sacrifice fly to plate the Angels’ fourth and final run of the game. Sportswriter Pat Donovan called Boone’s 0-for-1 game with two RBIs the “most misleading hitless game in the history” of the postseason.10 “It’s the kind of thing you obviously take a lot of pride in,” noted Boone about his two run-scoring sacrifices. “We enjoy playing that kind of ball, bat control. It’s my strong suit offensively.”11

The Angels were leading 4-0 with two out in the fifth and Moore on first when Molitor came to bat. A dangerous offensive catalyst who led the majors with 136 runs scored, Molitor was a speedy, slappy hitter, who also swiped 41 bags. He sent a sinking liner to center field. Instead of playing it safe and taking the ball on the hop, four-time Gold Glove winner Fred Lynn made an ill-advised dive for the ball. He missed it and the ball rolled to the wall, enabling Molitor to circle the bases for a two-run inside-the-park home run and give the Brewers a new lease on life. “I can’t compromise the way I play,” said Lynn, who also noted that the outfield grass was chewed up from a Los Angeles Rams football game. “If I have a chance to dive and make a catch or run into a wall, I’ll do it and think about the consequences later.”12

Molitor’s hit proved to be the last one of the game as both pitchers showed their mettle. While Vuckovich yielded three walks, Kison set down 13 straight batters and ended the pitching duel in 2 hours and 6 minutes.

Kison’s five-hit gem with eight strikeouts and no walks gave the Angels what appeared to be an insurmountable two-games-to-none lead in the best-of-five ALCS. No team at the time had ever come back to win an LCS after losing the first two games. “If people don’t believe in us by now,” said scheduled Game Three starter Geoff Zahn, who led the Angels with 18 wins, “they won’t believe in us no matter what happens.”13 Fred Lynn, coming off his eighth of nine consecutive All-Star berths, harbored no doubts who’d emerge victorious: “When you look at the super pitching we’ve been getting and the way we’ve been playing for the last month, I think it is a tall order for any team to win three games in a row from us.”14

The ace in the hole for the Brewers was two graybeards. One was Harvey Kuenn, who kept his players loose; the other was 37-year-old Don Sutton, a September acquisition from the Houston Astros, tabbed to start Game Three when the series moved to Milwaukee. The Brewers were in a do-or-die position in the last game of the season and it was Sutton who tossed eight strong innings to clinch the AL East crown. “We’ve lost six of our last seven games,” stated Molitor unequivocally, “but on a positive note we’re still only three games from the World Series.”15 And then the future Hall of Famer laid it all on the table: “I really feel confident we can come back and win three straight.”16

12 Newhan. The Los Angeles Rams played their home games in Anaheim Stadium from 1980 to 1994. They played a home game on September 19, 1982, after which the NFL players went on strike.