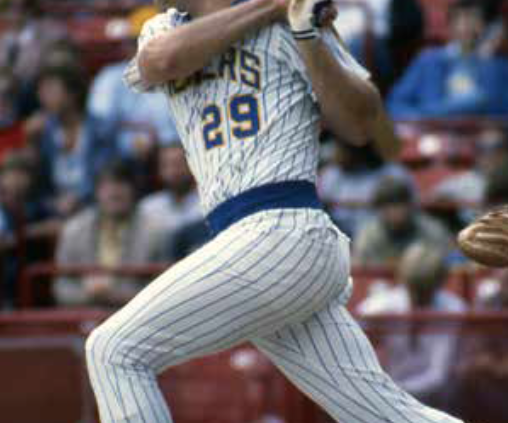 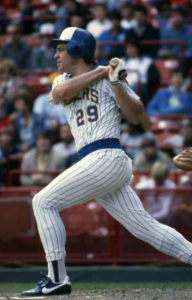 Mark Brouhard was a moon-faced reserve outfielder with some power and limited playing time for the Brewers in 1982.

But in Game Four of the American League Championship Series against the California Angels, Brouhard was a hero. He drove in three runs with a single, double, and a home run, and scored an ALCS-record four runs.

During the game, Brouhard got demands for two curtain calls from a packed County Stadium.1

“I knew the only way I’d get to start in this series was if someone got hurt,” Brouhard told the Milwaukee Journal. “I sure didn’t want that to happen.”2

But it did happen when regular left fielder Ben Oglivie bruised his ribs in Game Three trying to catch a double off the bat of Fred Lynn.3 Brouhard suddenly was asked to be the Game Four starter.

“There’s no doubt I was nervous,” he said. “When you haven’t played for four weeks, there’s not much you can do but look up and say a little prayer to the Lord and do the best job you can do.”4

The Lord answered Brouhard’s prayers and the prayers of thousands of Brewers fans with the 9-5 win that evened the series at two games each.

Brouhard wasn’t the only hero in the rain-plagued contest (a total of 2 hours 15 minutes in delays, including a 1 hour 40 minute delay of the start of the game).5

Moose Haas, who had started only two games since Don Sutton was obtained from the Houston Astros, held the Angels in check for 5⅔ innings. The Angels were hitless in the sixth inning, when rain held up the game for 19 minutes.

“I was thinking if they ended the ballgame, I’d be in the record books with an asterisk for pitching a five-inning no-hitter in the playoffs,” Haas said. “But I knew we were going to play nine no matter how long it took. They told us we were going to get in a full game.”6

The Brewers battered California starter Tommy John. Brouhard singled home Ted Simmons with the first run of the game in the second inning. Don Money, who was on first base, headed for third base on the single, and California center fielder Lynn’s throw hit Money and bounced to the railing.

Money scored on the play, and Angels third baseman Doug DeCinces threw wildly to the plate in a futile attempt to get Money. The wild throw allowed Brouhard to also score for a 3-0 lead.

“You want to try to go from first to third in that situation,” Money said. “You think that the ball’s going to slow down in the damp grass. I lined myself up with the throw. It hit me in the shoulder, and we ended up getting more runs out of it. Maybe if I don’t go, we only get one run that inning.7

“I could never find the groove,” said John, who had a 6-2 record in the playoffs going into the game. “I was missing, missing, missing. I could have had three days’ rest or a month’s rest and it wouldn’t have made a difference.

“I got behind and got hard-headed. I don’t like to groove it against the Brewers, and so I kept getting behind. Maybe I didn’t give myself enough credit for having the good stuff everyone said I did.”8

The Brewers followed their three-run rally in the second with another three-run rally in the fourth off Goltz. John issued two walks (one intentional) and threw two wild pitches, the latter of which resulted in Brewers’ fourth run. Jim Gantner drove in Brouhard with a single, which broke his 0-for-11 streak in the playoffs. Paul Molitor’s groundout drove in Charlie Moore to make it 6-0.

The Angels finally got on the board in the sixth when Lynn doubled home Reggie Jackson. Gantner drove in Brouhard in the bottom of the frame to put the Brewers up 7-1. “I’m just happy that when I did get hits, it meant something,” Gantner said of his two hits in the game. “The crowd really helped. It’s great. It gets you pumped up. Playing in front of your home crowd definitely gives you a lift.”9

Haas tired in the eighth inning and gave up a grand slam to Don Baylor that made the score 7-5. “We were right there at 7-5,” Baylor said. “Our pitching wasn’t up to it today. We were riding the wave when we first got here. Now they are.”10

If reliever Rollie Fingers had been available, 7-5 would have looked like a lock to many Brewers fans. But the future Hall of Famer was injured, so Jim Slaton relieved Haas in the eighth. He retired the last five Angels. Brouhard provided some insurance with his homer in the bottom of the eighth.

“We’ve all had to step up to fill in for Rollie,” Slaton said. “I just went out there and tried to get outs.”11

Fittingly, the final out was recorded by Brouhard, who made a running catch of Brian Downing’s fly ball.

“I think I turned the easiest play of the day into a hard one,” Brouhard said of the catch.12 Nobody was complaining, not after the overall day Brouhard had.

There was plenty of second-guessing after the game. Why did California manager Gene Mauch go with John on short rest? Why didn’t he pinch-hit in certain spots? For example, Mauch allowed Tim Foli and Bob Boone to bat in the eighth against Slaton, even though they were a combined 4-for-26.

“I had no qualms about pitching Tommy on three days’ rest,” Mauch said. “Some people thought I was hoping for a rainout so he had an extra day, but I was actually hoping we wouldn’t. My attitude all along was that I wanted him to pitch today, and he felt the same way. The man told me that’s the way he thinks he’s best. It isn’t typical of him to have control trouble, but the amount of rest he had between starts had nothing to do with it. There isn’t enough room left for me to second-guess myself. It’s all taken up.”13

Milwaukee manager Harvey Kuenn did not second-guess Mauch. Instead, he praised his team for coming back to even the series after being down 2-0. “This team has had what it takes in big games all season,” Kuenn said. “They’ve been at their best when their backs are against the wall.”14

The win in Game Four set up the dramatic Game Five, won by the Brewers, 4-3, on Cecil Cooper’s two-run single.

Simmons, one of the team leaders, previewed Game Five after the win in Game Four.

“Last Sunday, Baltimore had the same thing going,” Simmons said, referring to the final regular-season series against the Orioles, in which the Brewers clinched the division title. “Win one game. Tomorrow will be the same game. We’ve both got the same at stake. Last week, on Baltimore, it was like they were stealin’ our season. Well now, we’re trying to steal California’s, and they’re trying to steal ours.”15