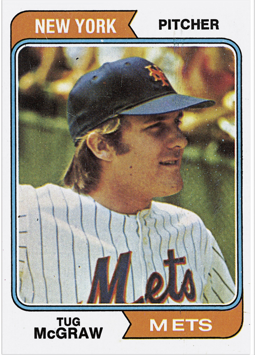 The morning of Sunday, September 1, 1974 started out the same as any other late New England summer day; hazy and humid with a chance of some rain. The 1974 season was different than any other for most of us in that arguably the greatest individual record in all of sports had been broken, and not only that, we had seen it happen.

On Monday, April 8, 1974, in a game nationally televised by ABC, Atlanta Braves outfielder Hank Aaron hit career home run number 715 off the Dodgers’ Al Downing, breaking the 40-year-old record set by the legendary and iconic Babe Ruth. Watching it live with friends then brought chills, listening to Milo Hamilton’s call today has the same effect with being a part of history.

The Mets had entered the ’74 season as the defending National League champions but had struggled all year and as the final month began found themselves 12 games below .500 and 10 games out of first place in the NL East. The Braves on the other hand were playing well, their 73-60 record would have given them a three-game lead on the Pirates in the East, but in the powerful West Division it was only good enough for third place. In fact, the Braves were further out of first place in their division than the Mets were despite a difference of 14 wins between them.

The pitching matchup in front of 33,879 fans was Carl Morton for the Braves toeing the slab against the Mets’ Tug McGraw. McGraw, the architect of the “Ya Gotta Believe” tagline used to spearhead the Mets’ drive to the World Series the previous season, was making the second of his four starts after being forced into the rotation in mid-August when George Stone injured his shoulder.

McGraw found himself in trouble right off the bat in the first inning as NL batting champ Ralph Garr singled and advanced to second when McGraw booted Marty Perez’ sacrifice bunt attempt. Darrell Evans struck out, bringing Aaron to the plate with two on and one out and he promptly grounded into a 6-4-3 double play.

Aaron came up again in the fourth after Perez opened the inning with a single and moved to second on a wild pitch. Evans flied to center and Aaron singled to left, moving to second on the throw home. McGraw escaped the inning after intentionally walking Dusty Baker unscathed and the game remained scoreless after four.

McGraw settled down at this point, retiring fifteen batters in a row before Evans singled with one out in the ninth. Aaron came to the plate twice more, lining out to third and popping weakly to second.

The Mets scored a single run in the fourth and two more in the fifth, all off Morton, and when Dusty Baker flied to center to end the game in a brisk two hours and 11 minutes, the Mets were victorious, 3-0.

This game marked not only the first and last time I saw Hank Aaron play live, it was the also the only time I saw the Mets play in Shea Stadium. It also marked the only shutout of Tug McGraw’s 19-year major league career. Of his 824 career appearances he made just 39 starts, just four following this one.