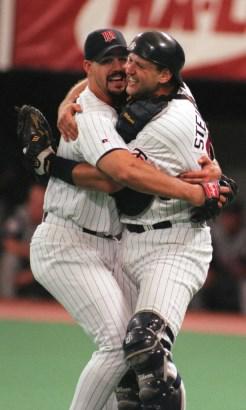 Late in the Minnesota Twins’ inaugural season of 1961, the team noted that its final Saturday game, on September 30, would be played on the same day as a home game for the Minnesota Gophers football team at Memorial Stadium in Minneapolis. The Twins changed their game time from the usual 1:30 in the afternoon to 10:00 in the morning to give fans the chance to scamper from Metropolitan Stadium in suburban Bloomington to Memorial Stadium in southeast Minneapolis and take in a mixed-sport doubleheader.

The morning games on days that coincided with Gophers home games continued through the remainder of Met Stadium’s history, which ended in 1981. When the Twins moved into the Hubert H. Humphrey Metrodome in 1982, an early start was a necessity when both teams were home because the Gophers had also moved into the Metrodome.1

On September 11, 1999, the Twins played the Anaheim Angels with the Gophers scheduled for a game against the University of Louisiana Monroe that night. Eric Milton, the starting pitcher for the Twins, hitched a ride with fellow starter Brad Radke, and the two pulled into the Metrodome parking lot around 9:00 A.M.2 The 24-year-old Milton was completing his second season in the majors, having been acquired by the Twins in a deal that sent Chuck Knoblauch to the Yankees after the 1997 season.

The teams eschewed batting practice, and Anaheim manager Joe Maddon, who had replaced Terry Collins eight days before, decided to rest his regulars and produced a batting order that didn’t include Darin Erstad, Tim Salmon, Garret Anderson, Jim Edmonds, and Mo Vaughn. Instead, the lineup had September call-ups Jeff DaVanon, playing in his second major-league game, Matt Luke, and Bret Hemphill as well as Trent Durrington and starting pitcher Ramon Ortiz, who had debuted in the majors that season. Troy Glaus and Orlando Palmeiro were the only regulars in the Angels’ batting order.3

Milton delivered his first pitch, a strike, to DaVanon at 11:06, and struck him out three pitches later. He walked Palmeiro but retired Todd Greene and Glaus to finish the inning on 15 pitches. The Twins got all they needed in the bottom of the inning on a run-scoring triple by Terry Steinbach.

Milton struck out four of the next five batters he faced before DaVanon walked and was caught stealing to end the third. The left-hander was in control and relied on his fastball to rack up six more strikeouts over the next four innings.

The Twins got three runs in the second and added two more in the fifth on a two-run homer by Denny Hocking. On a 1-and-1 pitch to the next batter, Matt Lawton, Ortiz skipped a pitch off Lawton’s helmet and was ejected by plate umpire Tim Welke. Predictably, Ortiz said the “pitch just got away from me. I don’t know why (Welke) thought I threw at him.”4

At the end of the seventh inning, with the walks to Palmeiro and DaVanon producing the only two runners off Milton, the Twins did a Wheel of Fortune promotion. A fan had to fill in the letters of a puzzle on the scoreboard and figure out the answer, which in this case was Jack Kralick. The question, as posed by Moose Miller of WCCO Radio, was “Who pitched the first no-hitter for the Twins?”

The press box erupted at the lack of etiquette and supposed jinx by having such a question come up at this time. Twins public-relations director Sean Harlin put his head in his hands and dropped his jaw. Miller, on his return to the press box, was told that Harlin was unhappy; he quickly ran to Harlin to explain it wasn’t his fault. The question had been developed before the game, but no one in game operations caught on and went with a different question since a no-hitter was in progress in the late innings of this game.5

Milton wasn’t bothered by the snafu and retired the Angels on 11 pitches in the eighth, although the last one brought the closest thing to a hit as Hemphill broke his bat on a weak popup to the right side beyond Milton. Cleatus Davidson raced in from second and caught the ball at his knees.

Two doubles and a walk in the eighth produced another run and gave Milton a little extra time in the dugout. When he came out for the ninth he fell behind Durrington 3-and-1 before getting him to pop out. Sheets, on a 1-and-1 pitch, grounded out. In stepped DaVanon, who looked at a called strike and then two balls. DaVanon took a cut so mighty on the next pitch that he nearly toppled over. The next pitch missed, but Milton came back with a fastball clocked at 94 miles per hour, and DaVanon swung and missed.

Steinbach raced out from catcher and was the first to embrace Milton as the rest of the team stormed out from the bullpen and dugout to join the celebration.

It was the second no-hitter Steinbach, who was in the final weeks of a 14-year career in the majors, had caught. The other was by Dave Stewart in 1990, when Stewart was a veteran pitcher and Steinbach still a relatively young catcher for the Oakland Athletics. Steinbach later recalled how the experiences were different for him.

Stewart had called his own game, using a system in which he could wipe off a signal from a catcher. “I did a lot of following with (Stewart),” said Steinbach. “(With) Milton, however, I’m the veteran. I was more nervous than he was in the seventh, eighth, and ninth innings. He’s going to pretty much throw what I call, so I felt a tremendous amount more pressure not to blow it.”6

The game ended at 1:34 P.M., and crews were already transforming the diamond to a gridiron before the Twins cleared the field and the crowd of 11,222 filed out. Within 5½ hours the Gophers and Louisiana Monroe were kicking off.

Some attempted to diminish the no-hitter by pointing out that it had been done against a Triple-A lineup. This was, in part, a sour-grapes reaction from those who hadn’t attended. For those in the Metrodome that morning and afternoon, however, it was a surge of excitement in an otherwise dismal season. (The Twins finished last in the AL Central Division.) For Milton, it was the highlight of his career.

“It’s probably the greatest day of my life,” he said after the game.7

Author scorebook and memories of the game.

1 The Twins later changed the time to 10:30 (while also adopting 11 A.M. starting times for games on Memorial Day, Independence Day, and Labor Day) at Met Stadium. The usual starting time for the Gophers at Memorial Stadium was 1:30. At the Metrodome the Twins played at 11:00 A.M. (or a few minutes after the hour) and the Gophers at 7:00 P.M.

3 Todd Greene was also in the Anaheim lineup. Greene played in 97 games that season but wasn’t a regular at any spot or position. Andy Sheets, also in the lineup, was a semi-regular, splitting shortstop duties with Gary Disarcina. Palmeiro played 92 games in the outfield and 109 overall; if not a regular, Palmeiro at least played the second-most games in the outfield on the team.

5 Memory of the author, who was also the person who told Moose Miller of Sean Harlin’s angst.