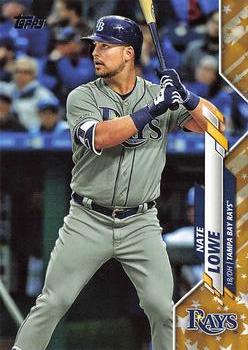 Before the game, the players, coaches, and grounds crew observed a moment of silence in memory of the lives lost 19 years earlier to the day on September 11, 2001. Due to the pandemic, there were no live fans, only the “flat fans”1 the Tampa Bay Rays had installed throughout the stands.

The Rays (28-16) were leading the American League East by 3½ games over the Toronto Blue Jays as the pandemic-shortened 60-game season reached its final three weeks. But they had just lost three games in a row, including a 4-3 defeat by the last-place Boston Red Sox (16-30, 12½ games back of the Rays) the day before. Rays manager Kevin Cash, trying for more offense, decided to start an all-lefty lineup against right-handed Red Sox starter Andrew Triggs. This was the first all-lefty lineup in major-league history.2 Cash also canceled batting practice to give his team a break from their routine.

Boston, coming off an 84-78 season in 2019 and two years removed from their 2018 World Series championship, was struggling in the shortened season. The Red Sox’ fielding and pitching statistics were near the bottom of the league.

Rays pitcher Blake Snell (3-1, 3.74 ERA) was looking for his first 2020 win at Tropicana Field. He certainly started out on the right foot: Alex Verdugo was out on a comebacker and Rafael Devers and Xander Bogaerts struck out in the top of the first.

Triggs (0-2, 9.95 ERA), with his crossfire delivery from the third-base end of the pitching rubber, was not nearly as efficient as Snell. Austin Meadows was out quickly on a foul pop and Joey Wendle grounded out, but Brandon Lowe singled, then stole his first base of the year, sliding in headfirst. He almost slid past the bag but managed to get his toe secured before his hand lost contact. Triggs walked Ji-Man Choi to put two on, but Kevin Kiermaier grounded out to end the threat.

All Snell allowed in the top of the second was a double to Jackie Bradley Jr. Bobby Dalbec fanned to end the inning. Snell was probably relieved – Dalbec was playing in only his 11th major-league game but already had six home runs to his name.

Triggs typically would have pitched more than one inning.3 But he had to leave with a pinched nerve in his neck,4 so lefty Matt Hall (19.89 ERA) took over the pitching duties in the second. At first glance, a lefty pitcher may be expected to have an edge against the all-lefty lineup, but the splits favored the Rays in this case – lefties were batting .391 against Hall.5 The Rays wasted no time taking advantage of the opportunity. Yoshi Tsutsugo’s homer would have gone into the Rays’ ray tank beyond center field if it had been in use in 2020 – instead, it was caught in the net covering the tank. Hall managed to limit the damage to that one run, allowing only a two-out single to Michael Pérez.

Snell started missing the strike zone in the top of the third, walking Michael Chavis on several high pitches. But Christian Arroyo stalled the rally by grounding into a double play. Snell gave up singles to Verdugo and Devers on consecutive pitches but got out of the jam when Bogaerts hit a tapper back to the mound.

Hall allowed another run in the bottom of the third. Wendle and Brandon Lowe opened with back-to-back singles. After Choi flied out to center, Hall removed his cap to review his “information card”6 tucked inside – and dropped it on the mound. Whatever analytic clues were included on the card, they didn’t help him hold the runners. Wendle and Lowe executed a double steal, allowing Wendle to score on Kiermaier’s groundout for a 2-0 Tampa lead.

Snell allowed a leadoff single to Christian Vázquez in the top of the fourth, but the Boston catcher was erased when he was caught stealing second. Boston manager Ron Roenicke challenged the “out” call, but it was upheld.

The Rays doubled their lead in the fourth. Nate Lowe7 (no relation to Brandon) singled and Pérez worked a one-out walk. They both scored on Meadows’ double, which bounced off the synthetic turf, then hit near the top of the center-field wall – a lucky break for Tampa. If it had cleared the wall, the Rays would have scored only one run on a ground-rule double, but the two runs gave them a 4-0 lead. When Hall walked Wendle on five pitches, Boston called on Phillips Valdéz (3.04 ERA) to take over the pitching. That worked – Nate Lowe immediately grounded into an inning-ending double play.

Snell walked Dalbec to start the fifth but got two strikeouts and a lineout to leave him at first.

Valdéz, who had thrown only three pitches in the fourth, continued his effective outing in the fifth – with a little help from his defense. Choi hit a liner toward left, but Devers made a leaping grab for the out. Although Valdéz threw a couple of pitches that skipped past the catcher, he completed the inning by striking out Kiermaier and Tsutsugo. Valdéz, the first of a series of right-handed Red Sox relievers through the end of the game, was the only Boston pitcher who did not allow a hit.8

Snell’s pitch count (83) was approaching the red zone as he started the sixth inning. His high for the year was 101 on August 24 – the only 2020 game in which he threw over 100 pitches.9 Devers, the first batter he faced, worked the count full and grounded to first. Bogaerts also worked the count full, then singled. Vásquez, on a third straight full count, grounded a ball to third baseman Tsutsugo. Tsutsugo let the ball bounce off the end of his glove, so Bogaerts was safe. Without that error, the Rays might have turned a double play to allow Snell to complete six innings – something he hadn’t done since July 21, 2019, 12 starts ago.

But as it was, that was all for Snell. Pete Fairbanks, who had given up the winning run in the seventh the night before, took over on the mound. He got Rays out of the inning with a double play.

Domingo Tapia was next up from Boston’s bullpen. Unlike most of his fellow relievers, he did not have an inflated ERA – because he was making his major-league debut. Nate Lowe made it a 5-0 game by hitting Tapia’s second pitch for a home run, knocking over one of the flat fans. The rest of the inning probably was more to Tapia’s liking – two fly outs, a walk, and a strikeout to complete his debut.

John Curtiss pitched the seventh for the Rays. All he allowed was a single to Dalbec.

Robinson Leyer (13.50 ERA) wasn’t making his debut, but he was making only his fifth major-league appearance. His seventh-inning outing didn’t do much to encourage the Red Sox to keep him10 – he gave up four runs on two walks, a mound visit, a single, and Nate Lowe’s second home run of the game. Robert Stock (5.87 ERA) took over and got the last two outs, ending the inning with a 9-0 Tampa lead.

It looked as if the Red Sox might get on the board in the eighth when Verdugo and Devers singled off the Rays’ Ryan Sherriff. Bogaerts’ groundout put runners on first and third with one out, but Vázquez killed the rally by grounding into a double play.

The Rays scored two more in the bottom of the eighth. Wendle hit a one-out double into the right-field corner, advanced to third on a wild pitch, and scored on Choi’s double. Kiermaier followed with a groundout, scoring Brandon Lowe (who had walked ahead of Choi). Stock struck out Tsutsugo, ending Boston’s bullpen struggles with an 11-0 Tampa lead.

Boston avoided a shutout by putting one run on the board in the top of the ninth. Aaron Loup allowed one-out doubles to Bradley and Dalbec. He gave up a single to Chavis, but got a strikeout and a groundout to end the game with the final score 11-1, Tampa.

Boston stayed in last place, finishing the shortened season at 24-36 with its pitching staff ranking last in many categories in the AL.11

The Rays won the American League pennant but lost the World Series to the Dodgers in six games. Snell, pitching that critical sixth game, was pulled at 73 pitches with one out in the sixth after having given up only two hits. The reliever gave up the winning runs, leading to the inevitable discussion of whether Cash pulling Snell was a good idea.12

But for this game in September, no one questioned Cash’s decision to use an all-lefty lineup – it emphatically ended their losing streak and made some history besides.

1 During the 2020 season, due to the pandemic prohibition on fans in the ballparks, most major-league teams created laminated plastic “fans” to occupy the otherwise-empty seats. Fans provided photos of themselves, their relatives, or their pets. The cost was often donated to the team’s charitable arm. Some teams (i.e., Washington Nationals) installed photos of the players’ families near the home dugout. See, e.g., Bill Shaikin, “Dodgers Sell Seats Outfitted with Cutouts of Fans’ Faces,” latimes.com, July 14, 2020. latimes.com/sports/dodgers/story/2020-07-14/dodgers-sell-seats-outfitted-with-cutouts-of-fans-faces. Accessed November 5, 2021.

3 Since being claimed off waivers (from the Giants) by the Red Sox in August he had two three-inning outings.

6 With the emphasis on analytics, each player was provided with a card, 3-by-5 or a little larger, that included defensive positioning for certain pitch counts on certain players, or any other potentially relevant information. Most fielders kept them in their back pockets, catchers would wear them on their wrist in a special holder, but Hall chose to try to keep it tucked in his cap.