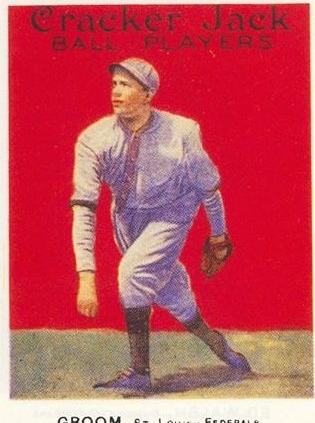 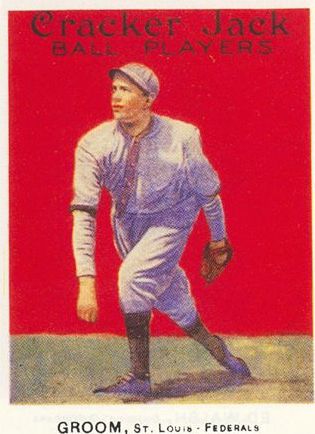 The Brooklyn Tip-Tops were very much still in the hunt for the Federal League flag, one of five teams within five games of first place. Visiting St. Louis was in seventh place, 14 games behind the league-leading Indianapolis Hoosiers.

Manager Bill Bradley named Bill Chappelle (1-2) to start for Brooklyn; Fielder Jones — who had assumed the reins from Mordecai Brown on August 21 — started Henry Keupper, on his way to a 20-loss season. Keupper was 8-17 at the time, having won his last decision. And Keupper got a boost when the Terriers scored twice in the top of the first inning. Jack Tobin singled to right field to lead off. Al Bridwell successfully sacrificed Tobin to second. The sacrifice paid off immediately when Del Drake singled and drove in Tobin. Doc Crandall singled to left; the ball eluded left fielder George Anderson and Drake scored from first, with Campbell reaching third. Campbell later got caught in a rundown and the top of the inning ended without a third run scoring. Keupper retired the Brooklyns and it was 2-0, St. Louis.

Around this time “Umpire [Ollie] Anderson hove in sight, and seemed surprised that the game had started at 2:30. He explained that he had understood that 3 o’clock was the time set for the start.”1

It might have paid to be more attentive to the newspaper. The September 12 game was the fourth game of a four-game series with St. Louis. The previous three game times had all been at 3:30 P.M., but September 12 was a Saturday.2 The 4:00 P.M. Friday edition of the Brooklyn Daily Eagle contained the customary two-line notice (likely an advertisement) at the bottom of column six on page 18:

Neither umpire had turned up at the 2:30 game time, so managers Bradley and Jones had agreed to each select one man from their respective teams to officiate. St. Louis pitcher Bob Groom worked home plate, and Brooklyn right-hander Bert Maxwell umpired at first base.

Another inning passed and the score remained the same. Then arrived another arbiter. “Umpire [Monte] Cross strolled into the grounds and became very much agitated when he found that a couple of innings had already been played.”3

Groom and Maxwell each returned to their respective benches and the game continued with the intended crew in position. Third baseman Al Boucher turned up around this time, too. He had another reason for being late. “I got married this morning,” he told manager Jones.4

In the third inning, Jones let Boucher take over at third for Grover Hartley, who had started the game and struck out in his only at-bat.

Bridwell homered to make it 3-0, St. Louis, in the top of the sixth. Keupper had allowed only one hit over the first five innings, but in the bottom of the sixth, Brooklyn got to him. With one out, Steve Evans singled to left and Solly Hofman waited out a walk. Ed Gagnier singled, scoring Evans. With runners on first and second and still just the one out, manager Jones decided to pull Keupper from the game — and he called on one of the stand-in umpires from early in the game to relieve him: Bob Groom.

Shortstop Al Halt singled up the middle, scoring Hofman, and when Gagnier saw the throw go to the plate, he ran to try to reach third base. Groom cut off the throw and fired the ball to the newlywed Boucher at third base — but Groom’s throw was errant and Gagnier was safe.5 Not only that, but Halt ran to take second base. The catcher, Grover Land (each team had a Grover in the lineup), hit safely for the third time in the game, getting a single off shortstop Bridwell’s glove, and two runs scored. Brooklyn had taken a 4-3 lead.

The pitcher, Chappelle, was up and he struck out — though the Brooklyn Daily Eagle said he’d only done so “after almost killing Umpire Anderson with a variety of fouls, his ‘umps’ being struck three times.”6 There was another base hit, by Felix Chouinard, who had replaced left fielder George Anderson, but a double steal resulted in the third out being recorded. The inning ended 4-3, Brooklyn. The first three runs were charged to Keupper, but the fourth to Groom.

In the top of the eighth inning, Groom was due up for St. Louis, but manager Jones made a move and put himself in as a pinch-hitter. He made an out.

In the eighth inning, Groom’s replacement, Doc Watson, was pitching for the Terriers. Hap Myers had taken over at first base for Brooklyn, with center fielder Al Shaw leaving the game and first baseman Steve Evans moving to right field while right fielder Claude Cooper scooted over to play center.

Cooper had led off the bottom of the eighth and struck out. Myers walked and then stole second, but when he saw St. Louis catcher Mike Simon’s throw roll into center field, he kept running and wound up on third. Steve Evans singled him home, and the score was 5-3 in Brooklyn’s favor.

St. Louis failed to score in the top of the ninth and the game was over. Bill Chappelle had a complete-game win, evening his record at 2-2. The loss was charged to the erstwhile umpire Bob Groom. His record was now 13-16. The brief article in the New York Times concluded, “Groom unquestionably ‘jinxed’ himself by taking the umpire’s job.”7

The game was played in front of an estimated 1,500 spectators. Despite all the various substitutions, from the umpires to two relief pitchers, one pinch-hitter, and three position-player substitutions, the game itself took either 1:40 or 1:50 to play, depending on the newspaper.

2 Friday had been a Ladies Day game with “Ladies admitted free.” There was no Sunday baseball in Brooklyn at the time. The Hoosiers were due in Monday, with a 3:30 P.M. game time.

4 “Al Boucher Marries, Then Finishes Game,” Brooklyn Daily Eagle, September 13, 1914: 29. Boucher had married his childhood sweetheart, Frances Randall of Franklin, Massachusetts. The couple had obtained a marriage license that morning, and wasted no time, getting married by an alderman because “the parties concerned are of different religions and their parents made most strenuous objection to the match.”

5 The St. Louis Post-Dispatch assigned an error to Boucher on the play “with his muff of Groom’s toss to third for an apparently easy out in the seventh inning.” See “Boucher’s Error Helps Brookfeds to Beat Terriers,” St. Louis Post-Dispatch, September 13, 1914: 1S. Their box score incorrectly names the two ultimate official umpires as Anderson and what appears to be “Manassa” — likely meant to be Al Mannassau, another Federal League umpire. Mannassau, however, was working a game in Buffalo on September 12.

7 “Pitchers and Umpires, Too.”