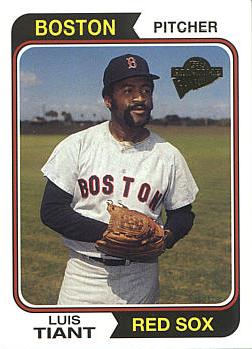 As the sun came up on September 16, the Red Sox enjoyed a 4½-game lead over the Baltimore Orioles with 12 games to play, a lead that might ordinarily have led to optimism. But really, the race seemed much tighter than that. The Orioles had won the AL East five of the past six years, and Boston fans hardly needed reminding of what had happened a year earlier, when the Red Sox let a seven-game late-August lead slip away, taken down by an Orioles team that went 28-6 in the final five weeks.

Surprising no one, the Orioles were once again red hot in time for their final showdown with the leaders, a two-game set in Fenway Park. After starting the year terribly – Baltimore stood in last place as late as June 10 and just 45-45 on July 20 – the Orioles had put on a patented late-summer surge to get back in the race, 39 wins in 59 games heading into the two-game series.

The pitching matchup seemed to favor the visitors. Taking the hill for the Orioles would be Jim Palmer, the game’s greatest pitcher, with a record of 21-10 and a 2.17 ERA, including nine shutouts so far this year – the best season of his stellar career. Facing Palmer would be Luis Tiant, the Red Sox’ erstwhile ace who had struggled with a bad back most of the year and was just 16-13. But hope was not lost: Five days earlier Tiant had three-hit the Tigers, losing a no-hitter with two out in the eighth inning. Still, the Tigers were a last-place club, hardly the Baltimore Orioles.

The announced attendance was a season-high 34,724, though some observers believed the standing-room patrons swelled the crowd well beyond that total. “They have had these tickets since April,” wrote Peter Gammons in the Boston Globe, “in the eternal and annual hope that this year, finally, would be the eradication of frustrations past.”1

Truth be told, the game displayed very little action other than on the pitcher’s mound, where every eye was focused, and where the outcome was determined. The Red Sox stranded Denny Doyle after his one-out triple in the first, but struck pay dirt on two Palmer mistakes – solo home runs by Rico Petrocelli in the third and Carlton Fisk in the fourth – both of which landed in the screen atop the left-field fence.

The masterful Tiant took it from there. He allowed a single to Royle Stillman in the first inning and a single to Don Baylor in the second (promptly picking him off). The first two Orioles reached in the fourth, but Tiant bore down and got out of the jam easily. He allowed singles in the sixth and seventh, but retired the last eight men to face him. In the game, the Orioles managed just five singles, striking out eight times. It was Tiant’s first shutout of 1975, and it took just 2 hours and 13 minutes.

“For all the acts and encores El Tiante has performed,” wrote Gammons, “this was perhaps his finest hour. If pennant races are supposed to come down to the great matchups of great pitchers, this was one we shall all remember years from now. With the perfectly timed comeback of Tiant, it was the matchup of two of the best money pitchers of recent years, won on two Palmer mistakes.”2

“It’s no disgrace losing to a guy who pitched that well,” said Palmer. “Frustrating, yes, but no disgrace. I just made two bad pitches, a fastball to Rico that I wanted a little on the outside and it wound up over the plate, and the fastball starting off to Fisk. Otherwise, I did about as well as I thought I could.”3 Palmer’s manager, Earl Weaver, had to agree: “That’s about the best I have ever seen Tiant. He made good pitches tonight. When you come into Fenway Park and give up two runs as Palmer did tonight, you don’t mind. But the other guy pitched a great game.”4

“Palmer,” countered Tiant, “is the best pitcher in the league, and I went out there thinking this is a time to win, and win now. I’ve always wanted to pitch in the World Series, and I figured if we win now, well, it’s that much harder for them.”5 Asked about his “comeback,” Tiant added, “I don’t want to make excuses, but the back has been a problem. I just couldn’t throw as hard or to the places I had to. So this is very satisfying. I had good stuff, all my pitches. Fastball, curve, knuckle … I threw five knucklers, three for strikeouts.”6

One of the two hitting heroes, Fisk, had the best view in the house of Tiant’s mastery. “These last few days we’ve had 30,000 here,” said the catcher, “but it was like a morgue. But when Luis goes out there, it’s just a different than any other man. There isn’t a player alive who can’t feel what he exudes from the audience.”7

Besides the obvious – the Red Sox now led by 5½ games with 11 to go – Tiant’s performance also gave the team hope for what lay ahead, their first postseason in eight years. “We were very concerned about Tiant,” admitted Boston pitching coach Stan Williams. “He had physical problems and they were causing mechanical problems. We were concerned it might be the end of the line. But he’s far from the end. … Tonight they had no idea what he was going to throw or where he was going to throw it.”8

So was it over? Were the Orioles dead?

“We still have a chance,” said Weaver, “and nobody in this room is going to give up.”9

“We still have a way to go,” cautioned Boston first baseman Carl Yastrzemski, who was a quiet 0-for-4.10

The Orioles were hardly dead. But thanks to the dazzling Luis Tiant, Red Sox fans throughout the region slept much more soundly after September 16, 1975.