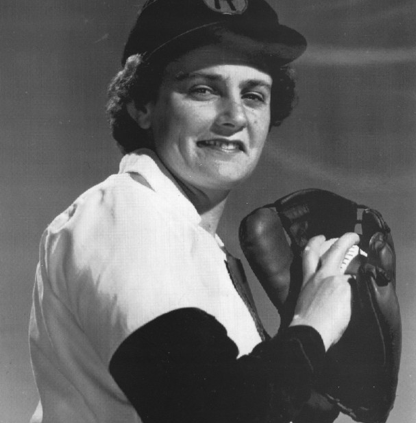 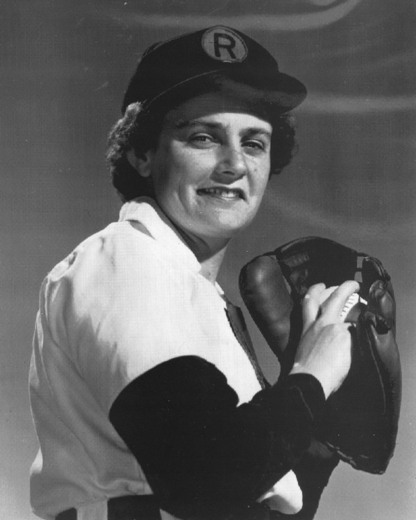 Rockford Peaches manager Bill Allington needed a starting pitcher for Game Seven of the 1950 All-American Girls Professional Baseball League (AAGPBL) championship series. The ace of his pitching staff, Lois “Flash” Florreich, was out of commission after injuring her shoulder sliding into home plate in Game Three of the series.1 Allington’s decision wasn’t difficult. Fortunately for the Peaches, he had another ace up his sleeve in 30-year-old veteran hurler Helen “Nickie” Nicol Fox.2

Nicol Fox had joined the league in its inaugural 1943 season as a member of the Kenosha Comets and found instant success.3 She was the league’s earned-run average champion in her first two seasons, using an underhand, figure-eight-style motion and a devastating rise ball.4 The hard-throwing right-hander capped her stellar 1944 season by tossing a Labor Day no-hitter against the Racine Belles.5

After completely dominating the league for three seasons, Nicol Fox went on to become one of the few AAGPBL hurlers to transition successfully from underhand to side-arm and then overhand pitching as league rules evolved.6 Merely an average side-arm pitcher when she was acquired by Rockford in a trade with Kenosha in the middle of the 1947 season,7 Nicol Fox improved slightly when the league moved to overhand pitching at the start of 1948,8 and in that year’s playoffs she reemerged as one of the league’s top stars. Nicol Fox went 4-0 with a 0.75 ERA in the postseason, including a win in the clinching game of the 1948 championship series against the Fort Wayne Daisies.

Rockford repeated as playoff champion in 1949, thanks in large part to the one-two punch of Florreich and Nicol Fox. Florreich led the league with an astounding 0.67 ERA, setting the all-time AAGPBL single-season record, while Nicol Fox finished second with a 0.98 ERA.

The Peaches’ dynamic pitching duo fell off slightly in 1950, with Florreich finishing second in the league with a 1.18 ERA and Nicol Fox coming in fifth with a 1.98 mark.

Rockford and Fort Wayne battled down the stretch for the 1950 pennant, with the Peaches clinching on the final day of the season,9 giving them home-field advantage in the postseason. Round One of the playoffs went as expected. Rockford and Fort Wayne both won their best-of-five series in four games, setting up a rematch of the championship series from two years earlier.

Nicol Fox was running on fumes by the time she took to the mound for her Game Seven start on two days of rest.10 She had tossed a complete-game victory in Game One and lost Game Four, giving up four earned runs in eight innings of work.11 The next day she pitched 4⅔ innings of relief to pick up the win in Rockford’s thrilling 10-inning Game Five victory.12

Fort Wayne manager Max Carey gave the ball to his ace, Millie Deegan, in the winner-take-all game.13 Deegan had been dealt away by Rockford three years earlier in the Nicol Fox trade.14 The much-traveled Deegan, who was already on her fourth AAGPBL team,15 had gone 16-9 with a 2.17 ERA in the regular season. After getting knocked out of the box early and suffering the loss in Game Two, Deegan redeemed herself by pitching well in relief in Game Three, helping Fort Wayne get back in the series.16

Nicol Fox kept the dangerous Fort Wayne hitters off the scoreboard in the top of the first.

A well-rested Deegan got off to a shaky start in the bottom of the inning. She issued two walks and a hit-by-pitch, bringing utility player Jackie “Babe” Kelley (later Savage) to the plate with the bases loaded and two out. Kelley was in the lineup for Rockford’s regular third baseman, Alice Pollitt (later Deschaine), who had suffered a season-ending ankle injury in August.18 Kelley hit .226 in the regular season and was batting only .152 (5-for-33) in the playoffs heading into Game Seven.19 But she came through on this occasion, singling in a pair of runs and giving Rockford a 2-0 lead. It turned out to be all the runs Nicol Fox needed, and Kelley would soon have her second game-winning RBI of the championship series.20

Rockford catcher Marilyn Jones (later Doxey) reached base to start the bottom of the second on an error by third baseman Weaver Foss.21 Two outs later, Dorothy “Dottie” Kamenshek slammed a Deegan offering for a two-run homer and Rockford led, 4-0.

Carey gave Deegan the quick hook, bringing in Dorothy “Dottie” Wiltse Collins to start the bottom of the third inning. Wiltse Collins was greeted with a double by Eleanor “Squirt” Callow and an RBI single by second baseman Charlene Barnett, extending the Peaches’ lead to 5-0.

Rockford blew the game wide open in the bottom of the fourth with four runs on two singles, three errors, and a sacrifice by Barnett.22

Frances Janssen replaced Wiltse Collins on the mound to start the next inning. After keeping the Peaches off the scoreboard in the fifth, she gave up a run in the sixth on an RBI single by Callow.

The Peaches pulled out in front, 11-0, in the bottom of the eighth on Callow’s run-scoring double.

Nicol Fox pitched a scoreless top of the ninth, clinching Rockford’s third consecutive championship and giving them their fourth playoff title in six years. The victory cemented Rockford’s status as the most successful franchise in AAGPBL history.

Despite both teams recording 11 hits in the game, Rockford cruised to a blowout win. “Reasons, of course, were Nicky’s crafty pitching in the clutches, four Fort Wayne errors, and the fact that the Peaches collected their blows when they counted,” wrote Dick Day of the Rockford Register-Republic.23

A tired Nicol Fox managed to coax “a bit more magic out of her weary flipper” in her fourth appearance of the series.24 Lacking her best stuff, she got by on guts and guile. Nicol Fox didn’t walk a single batter, and she stranded 10 Fort Wayne baserunners.

Although the AAGPBL never selected a championship series or playoff MVP, Nicol Fox would surely have been given strong consideration for the award. The Ardley, Alberta, native became the first (and only) pitcher to win three games in an AAGPBL championship series. Nicol Fox stepped up in the absence of Florreich, recording a 1.17 ERA in the series and logging 30⅔ of the 61 innings tossed by the Peaches pitching staff.25

Rockford’s quest for a fourth consecutive championship was hindered by four key player retirements in 1951. Two of the Peaches’ top three hurlers, Florreich and Louise “Lou” Erickson (later Sauer), hung up their spikes, along with both of their starting middle infielders, Barnett and All-Star shortstop Dorothy “Snookie” Harrell Doyle.26

Despite the substantial player losses, Rockford came within a hair of extending its dynasty in 1951. After winning the first two games of its best-of-five series championship series against the South Bend Blue Sox, seven Rockford players and manager Allington came down with the flu.27 The Blue Sox came roaring back to take the final three games and claim their first playoff championship.

It wasn’t just her regular-season performance that made her the most accomplished hurler in AAGPBL history.28 Nicol Fox was even better in the playoffs, posting a 13-7 record and a 1.83 ERA, and those 13 victories stand as the all-time record for career wins in the postseason.29 Perhaps none of those victories was bigger than her clutch shutout against the hard-hitting Fort Wayne Daisies in Game Seven of the 1950 championship series.

In addition to the sources cited in the Notes, the author consulted AAGPBL.org and The All-American Girls Professional Baseball League Record Book. Standings were referenced in the South Bend Tribune, Kenosha Evening News, and Racine Journal-Times. Box scores for the entire championship series were found in the Rockford Register-Republic and Rockford Morning Star. All play-by-play information for Game Seven was taken from the article “Peaches Wallop Daisies, 11-0, to Clinch Playoff Crown” on page 38 of the September 18, 1950, edition of the Rockford Register-Republic. 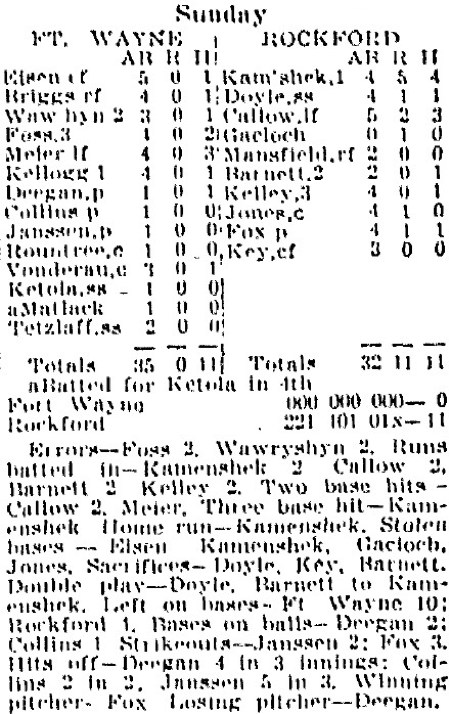 3 Less than one month into the AAGPBL’s inaugural season (June 25, 1943), Nicol Fox tossed 13 scoreless innings of relief to pick up the win in an 18-inning game against the South Bend Blue Sox.

14 Deegan was traded away by the Peaches in response to “dissension on the Rockford squad.” “Comets Swap Fox for Millie Deegan.”

15 Deegan finished her AAGPBL career in 1952 with the Rockford Peaches. She played for five different teams in her 10-year career.

17 Wawryshyn finished third in the league with a .311 batting average. She was also fifth in the league in stolen bases (65) and runs scored (71). Despite batting only .238, Fort Wayne’s leadoff hitter, Eisen, was second in the league in runs scored (87) and tied for second in stolen bases (75). Wilma Briggs batted .275 and finished 10th in the league with 109 hits. Nicol Fox faced Eisen, Briggs, Wawryshyn, and Weaver Foss at the top of the Fort Wayne batting order in Game Seven. Fort Wayne’s number-six batter, shortstop Dorothy “Dottie” Schroeder, was out of the lineup in Game Six and Game Seven with a leg injury. “Rockford Peaches Send Daisies Packing by 11-0,” Fort Wayne News-Sentinel, September 18, 1950: 8.

19 Kelley went 1-for-11 in the first-round series against Kenosha. She went 5-for-26 in the championship series, including a 1-for-4 in Game Seven.

20 Kelley also recorded the game-winning RBI in the 10th inning of Game Five. The concept of a game-winning RBI did not exist in 1950. A game-winning RBI was an official statistic used in the American and National Leagues between 1980 and 1988. It was defined as the RBI that gives a team a lead it never relinquishes. “Peaches Beat Daisies, 4-3, in 10 Innings.”

21 Jones was in the lineup in place of Rockford’s All-Star catcher, Ruth Richard, who had broken her ankle in the last game of the regular season. “Peaches Take 2nd Straight from Daisies.”

22 Weaver Foss made her second error of the game in the inning. The other two errors occurred on the same play, as second baseman Wawryshyn was charged with a fielding error and a two-base throwing error.

26 Harrell Doyle returned to play for the Peaches in 1952.