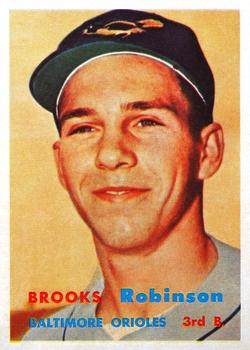 It was an inauspicious game. Both the Orioles and the Washington Senators were fighting to stay out of the cellar. The Orioles finished the season 57-97 in seventh place while the ever-struggling Senators finished 53-101.

Orioles manager Paul Richards tried out rookies in quick succession during the last part of the season in an attempt to shore up a team of aging veterans and so-so journeymen. Brooks Robinson was penciled in at the last minute due to an injury to another rookie third baseman, Kal Segrist. The Baltimore Sun erringly referred to Brooks as “Bobby” in its game recap.1

Robinson remembered, “I was in York, Pennsylvania [with the York White Roses]. I got there after high school in June, played about a hundred games and I was playin’ my last couple. They said I would be goin’ to Baltimore. George Staller was my manager; he told me. I didn’t know if I would play or not; they only had about 8 or 10 games left to play. I came to Baltimore and the first couple of games I didn’t play. I was just taking batting practice and fielding groundballs. Paul Richards says to me one day, ‘You’re in at third.’”2

A reported 8,734 Baltimore faithful, and surely many Senators stalwarts, whipped the turnstiles on this sunny September day.3 “Ancient” Ed Lopat squared off against Senators ace lefty Chuck Stobbs for the penultimate game of the O’s season.

Third baseman Ed Yost would do what he did best: walk. Tom Umphlett immediately grounded into a 4-6-3 double play. Veteran Mickey Vernon, in his 15th season, singled to left, followed by Roy Sievers, who singled Vernon to second. Carlos Paula, the stunning 6-foot-3 Joe Cambria Cuban find and the first black Washington Senator, got himself hit by the pitch to load the bases. And there they all stayed as usually reliable Pete Runnels flied out weakly to the shortstop.

Stobbs had his stuff that day and got Chuck Diering, Jimmy Dyck, and Dave Philley to fly out, pop out, and ground out in quick succession to take it to the second inning.

The Senators returned the favor in their half of the second as catcher Steve Korcheck, shortstop Jose Valdivielso, and pitcher Stobbs went 1-2-3.

First baseman Gus Triandos led off the home half of the second with a groundout, followed by a solid double off the bat of rookie catcher Hal Smith. A nervous Brooks Robinson stepped into the batter’s box and on an 0-and-2 pitch popped out to the catcher.

“I honestly don’t remember much about that first at-bat, it’s been so long,” Robinson said. “I just remember I didn’t get good wood on the ball, is all.”

Second baseman Fred Marsh made the Kiwanis Kids4 happy, sending Hal Smith home with a solid single to put the Orioles on the board, 1-0. Shortstop Willy Miranda sent a shot to deep center field. Fred Marsh tried to score from first, but Umphlett made up for his poor batting by gunning down Marsh with a great cutoff throw to second baseman Runnels.

The Senators whimpered in the third. Despite a good single by Umphlett, Yost, Vernon, and Sievers all made outs.

Lopat and Diering began the Orioles’ third with outs. Dyck reached second on a rare throwing error by Yost at third. Philley singled home Dyck to make it 2-0, Orioles. Triandos singled Philley to third but Hal Smith flied out.

The Senators failed to take advantage of some sloppy play in the top of the fourth. After outs by Paula and Runnels, Korcheck singled to center. Jose Valdivielso reached first on a very rare Willy Miranda error at short, putting Korcheck at second. Stobbs provided Robinson with his first fielding chance by grounding out to him at third, forcing Korcheck.

Leading off the fourth, with a 3-and-1 count, Robinson sent a solid single to left field. “I felt like, ‘wow, how ’bout that!’ I was shocked! Felt really good to get my first hit. Just gettin’ the opportunity to play. I was 18 years old. It was fantastic.”

Basking in the glow of his first big-league hit, Robinson was stranded at first as Marsh, Miranda, and Lopat all flied out.

The Senators made it 2-1 in the fifth, pushing a run across the plate on Yost’s double to left and fly balls by Umphlett and Vernon.

The home fifth started with outs by Diering and Dyck. Dave Philley got the kids excited with a good hit to center. Triandos singled to left fielder Roy Sievers, who scooped it up quickly and looped it to Valdivielso in shallow center, who in turn gunned it to Runnels at second for a force out of Dave Philley.

Top of the sixth, 2-1 Orioles. Carlos Paula sent a muscular single to left. Runnels and Korcheck each flied out to center, leaving Paula at first. Valdivielso hit a double to left, putting Paula at third. Hoping to add a run, manager Bucky Harris sent in long-ball threat Jim Lemon to pinch-hit for Stobbs. Lemon grounded out short to first to end the rally.

Right-hander Ted Abernathy relieved Stobbs in the bottom of the sixth and got Smith, Robinson, and Marsh in a quick order.

After surrendering a single to Yost to lead off the seventh, Lopat used all his tricks to shut down the Senators once again. Umphlett sent Yost to second with a sacrifice bunt. Vernon’s grounder to second advanced Yost to third. Sievers was up next. Manager Paul Richards knew how dangerous he could be with runners on base and gave him a free pass to first base. Carlos Paula tried to do too much and sent a weak grounder to shortstop Miranda, who forced Sievers at second to end the threat.

Abernathy was hot enough to cool down the Orioles 1-2-3 in the bottom of the seventh.

The top of the eighth brought Runnels up to face Lopat one last time; Runnels grounded back to the pitcher. Korcheck somehow found one of Lopat’s junk-mail specials and knocked it into center field for a double. Richards, knowing when he’d seen enough, pulled Lopat for veteran right-handed reliever George Zuverink. Harris then decided to pull righty Valdivielso for lefty Mickey McDermott, who flied out to center. Harris then pulled Abernathy, too, and pinch-hit left-handed-hitting Julio Becquer, another Cambria Cuban. Becquer hit a long fly ball into deep right field that settled into Philley’s glove.

Bottom of the eighth, 2-1 Orioles, and more changes. Minor-league wanderer Bobby Kline replaced Valdivielso at short and Harris brought in Panamanian-born minor-league journeyman Vibert “Webbo” Clarke to try to stem the tide. Clarke brought a little something to the plate and got Dyck and Philley to fly out to left field. Triandos turned on one of his fastballs for a double to deep center. Looking for more speed on the basepaths, Richards had Dave Pope run for Triandos. Now in a jam, Clarke tried to pitch around Hal Smith, who waited him out for a walk.

Up to the plate stepped Brooks Robinson. Looking for something good to hit, he found a fastball to his liking and took it into left-center field for a clean single, the speedy Pope scoring from second. That put Smith on third and Marsh at the plate but Smith got himself into a rundown at third, tagged out by Korcheck.

But the damage was done. The young Mr. Robinson had found a new neighborhood, providing two solid hits, and an important RBI. Robinson related:

“I played that day and I went 2-for-4, knocked in a big run for the Orioles that beat Washington. And I remember runnin’ back to the hotel. It was the Southern Hotel here in Baltimore and I called up my parents and said, ‘Hey mom and dad, guess what? I just played my first game, got two hits, and drove in a big run.’ I said this is my cup o’ tea!”

Zuverink had little trouble with the Senators in the top of the ninth, getting Yost to fly out, surrendering a single to reserve Ernie Oravetz, and then getting Mickey Vernon to ground into a game-ending double play.

It was 2 hours and 17 minutes of pure fun for the Kiwanis Kids, 5,486 paying customers, and one young man from Little Rock, Arkansas, who went on to play 23 seasons of major-league ball, all with the Baltimore Orioles, garnering American League, All-Star, and World Series MVP trophies, 16 Gold Glove awards, and a 1983 induction into the Baseball Hall of Fame, and single-handedly redefining the third-base position for the century. For his legendary performance in the 1970 World Series he was awarded the sobriquet the Human Vacuum Cleaner.5

In addition to the sources cited in the Notes, the author consulted Baseball-Reference.com and Kates, Maxwell. “Brooks Robinson,” SABR Bioproject sabr.org/bioproj/person/55363cdb.

1 Bob Maisel, “Orioles Whip Senators, 3-1: Rookie Robinson Get 2 Hits and Drives in Run,” Baltimore Sun, September 18, 1955: 42. The noontime sun was pushing into the mid 80s and the oh-so-balmy 60 percent humidity was just a joy to play in! In D.C., nobody put their summer clothes away until November.

2 Author interview with Brooks Robinson, September 22, 2019. Unless otherwise indicated, all quotations attributed to Robinson come from this interview.

5 Doug Wilson, Brooks: The Biography of Brooks Robinson (New York: St. Martin’s Press, 2014), 3-4. Wilson wrote, “Years after playing his last game, Brooks Robinson remains an unquestioned icon in Baltimore. His genuine, humble demeanor, friendliness and above all, ability to remain a great role model have somehow grown in significance over the years as fans are continually disappointed by sports figures who are rude, selfish and inaccessible. Brooks Robinson exhibits the exact opposite. And no matter how much fame of adoration he achieved, he never lost the sense of who he was: just a regular guy who loved the game of baseball. As one writer was prompted to remark, ‘Nobody’s ever named a candy bar for Brooks. Around here we name our children after him.’”