By 1862, the unofficial title of “champion” senior club in the Greater New York City region was being regularly applied to the Atlantics of Brooklyn, a team that compiled a series of match wins against other clubs that extended back to 1856.1 Under the existing “challenge” system, a new “champion” would be crowned only after a club won a match series of games against the reigning champions – at the time, the Atlantics.

One major challenge that the Atlantics faced in 1860, from the Excelsiors of South Brooklyn, is described in an earlier article in this volume.2 The Atlantics faced one additional serious challenger in 1860 — the Eckfords, who were undefeated in 13 contests. The two teams played a series of three games on successive Mondays, the Atlantics prevailing 20-11 in the decisive game.

A general feeling appeared to exist in early 1861 that the challenge system (and particularly the champion’s ability to control which challenges to accept) limited the number of teams that could compete for the title. Such a feeling may have prompted the Continental Club of Brooklyn to propose a new way of determining a champion in early April 1861. It called for teams to be paired by lot in a series of games leading to a home-and-home, best-of-three final.3

The idea was quickly doomed by the start of the Civil War, which left several teams short of players. But although the proposal was abandoned, the prize that it had intended to award the ultimate winner — a finely engraved “champion silver ball” — resurfaced as a topic of discussion in 1862.4 In its June 21 issue, the Brooklyn Eagle announced, in an article and an advertisement, that “the champion Atlantics and the celebrated Eckfords,” representing the Eastern and Western districts of Brooklyn, had agreed to play a series of games at the new enclosed Union Skating and Base Ball Grounds in Brooklyn. Admission would be ten cents, and the entire proceeds would go to the US Sanitary Commission, for the benefit of sick and wounded soldiers. In addition, the Continental Club announced that it would suitably update its silver ball for a trophy to the winner.5

The first game was played on Friday, July 11. Although the game attracted an audience estimated at between 3,000 and 4,000, the Eagle reporter deplored the decision by many of them to view the game from the high banks surrounding the enclosure, thus significantly diminishing the contribution the proceeds could make toward the Sanitary Commission. The Eckfords won the first game, 20-14, the Eagle reporter attributing the loss to the play of the Atlantics, which it described as “only tolerable and hardly excusable from such players.”6

The Eckford victory increased interest in the return game, which was played, despite intermittent showers, without delay on the same field on Friday, July 18. The total crowd was estimated to be as high as 8,000 — once again split nearly in half between those inside the enclosure and outside on the surrounding banks. They saw a complete reversal of fortune. The fielding of the Atlantics was “up to the mark” and “throughout very fine” (according to the New York Times), while the Eckfords, according to a New York Clipper reporter, “played a very poor game, the poorest in fact that they have ever played.” The final score was 39-5.7

The split required the playing of a third game at the Union Grounds. Although Andy Mills had pitched ably for the Eckfords in the first two games, the club delayed the third game until Joe Sprague, its regular pitcher in the early part of the season, returned from a three-month hitch in the Union Army. The two-month delay allowed an unprecedented interest in the game to develop, as is evident in this Clipper account of pregame activity:

For an hour or more before the time appointed for commencing the game, all the avenues leading to the grounds were occupied with streams of people proceeding to witness the match, every car on the routes that passed near by being crowded to excess with passengers. … At a very moderate estimate, there must have been, by 4 o’clock, at least 10,000 people in and around the grounds.8

The Atlantics scored single runs in the first two innings. The first resulted from shortstop Tom Devyr’s mishandling of a ball hit by Peter O’Brien, followed by a hit to right field by brother Matty O’Brien, who made it all the way to third. The second resulted from a hit to left field by Joe Start, who subsequently stole both second and third bases, and scored on a wild throw by catcher Waddy Beach to Andy Mills, now playing third base.

The Eckfords came back with five runs in the second. With left fielder Fred Crane playing deep, Peter Spence safely hit in front of him. He scored when Al Reach sent a hit to right field that Mace muffed enough to enable Reach to reach second base. (The player identified as “Mace” may actually be F.S. Massey, who had played earlier for two Brooklyn teams, Osceola and later the Exercise Club, which absorbed the Osceolas in 1859.) After Beach lined out to Pete O’Brien, Joe Sprague hit a “hot one” to third baseman Charley Smith, whose throw to first failed to beat Sprague. Reach attained third on a passed ball, then Devyr hit a “splendid” grounder to right that allowed him to reach third and both Reach and Sprague to score. Devyr held that base while J. Smith sent a “skyer” that managed to drop between Charley Smith and the two O’Briens, but he scored as Andy Mills grounded out to Charley. Harry Manolt then hit a ball sharply back to pitcher Matty O’Brien, who failed to catch it on the bound. Peter O’Brien then threw the ball wildly to first, enabling Manolt to reach first and Smith to score.

The Eckfords added another run in the third and two more in the fourth, building their lead to 8-2. They scored no more that day, but the Atlantics failed to take advantage, adding only one late run. As the innings wore on, the Clipper reporter noted, “the Atlantics expected to make that rally that has hitherto brought them out of many a tight spot in their matches, but somehow or other they did not succeed.”

The Eckfords’ 8-3 victory gave them the three-game match. Besides attracting the largest audience to a base ball game to that date, it marked the first changeover of “champions” in the New York City region. 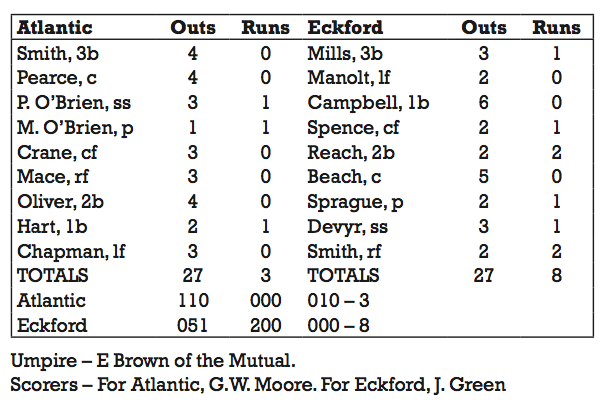 2 Research by Craig B. Waff.

4 The presentation of the game ball by the losers to the winners of a game was a tradition in early base ball and was even specified in rules formulated by the NABBP in 1857. Peter Morris, A Game of Inches: The Stories Behind the Innovations That Shaped Baseball: The Game Behind the Scenes, (Chicago: Ivan R. Dee, 2006), 293. Clubs would often write the results (that is, who won and who lost, the final score, and the date on which the game was played) on the ball itself, and some even publicly displayed such trophies. The customs and formalities regarding challenges and game balls were discussed in various question-and-answer correspondences that appeared in the New York-based Sunday Mercury newspaper in at least 1859 and 1860. For some samples, see Robert Tholkes, “ ‘Your Valuabal Paper’: Baseball Correspondence in the Sunday Mercury, 1859-1860,” Base Ball, vol. 4, no. 1 (Spring 2010), 44-58, esp. 53-56. The pre-engraved ball that was being offered by the Continental Base Ball Club of Brooklyn, however, was clearly a significant step above the normal trophy game ball. A subsequent Eagle article described the ball as being of “exquisite texture, large, and beautifully manufactured.” On its face initially was the inscription “Presented by the Continental B.B. Club to the Champion of the Prize Series, 1861” and a “finely executed” drawing below that represented a ballfield while a game was in progress. On the reverse was a scroll with the engraving “The Continental Prize Series” over a drawing of base ball implements (“Base Ball: Relief for the Sick and Wounded—A Silver Ball Match,” BDE, vol. 21, no. 147 (June 21, 1862), p. 2, col. 5).