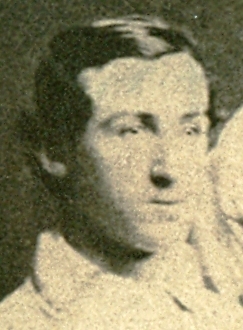 Following the success of their July 1860 swing through upstate New York — the first “road trip” in baseball history — the Excelsiors of South Brooklyn booked a second such trip during September, their destination this time being the cities of Baltimore and Philadelphia.

That excursion got under way on Friday evening, September 21, when the Excelsior players and other club members left the Jersey City depot for an overnight train ride to Baltimore. Although they arrived at the President Street railroad station at 4 A.M., they were greeted by a committee of Baltimore Excelsiors, who escorted them, in one of Barnum’s four-horse carriages, to Guy’s Monument House hotel.

After settling in their rooms, they and their hosts all sat down at 9:30 to enjoy a splendid breakfast at the hotel. Following a reception that allowed “the admirers of the game and friends of the club” to meet the visitors, they were taken by carriage to various places of interest in the city.

According to the New York Clipper, the Brooklyn players were supported in every way possible: “Every attention it was possible to bestow upon them being given them by the gentlemanly members of the Baltimore Excelsiors. Indeed, from the time of their arrival to their departure not a cent’s expense were they allowed to incur.”

At 1 P.M., an hour before the start of the game, the visiting players gathered on Holliday Street, where a city car “gaily decked with flags and drawn by four horses” transported them to the local team’s grounds at the corner of Madison and Northern Avenues, near Mr. Hartzell’s Park House.

More than 3,000 spectators had already assembled on the grounds, including many “blooming belles of Baltimore.” The sight of the latter so transfixed players Asa Brainard, John Whiting, and Thomas Reynolds that Captain Joe Leggett had to forcibly call their attention to preparation for the game. The pregame practice of the visitors made it clear to the local team that they had a major challenge ahead of them. The Baltimore American reported, “The ball passed from one to the other with great precision, and seldom was it allowed to slip through the fingers of any of them. This little exhibition made it manifest that the Baltimore Club would learn a few new points before the game closed.”

As he had during the upstate New York tour, pitcher Jim Creighton immediately bewildered the locals. “Mr. Beam, of the Baltimore nine, a very fine batter usually, led off, but he was hardly prepared for the swift, lightning-like balls which Creighton began to favor him with,” a correspondent reported. “He struck once without effect, and looked astonished; he struck again, and missed, and looked surprised; again he made an ineffectual stroke at the ball, and gave up his bat, apparently in wonder and admiration of the performance of the pitcher.”

As the pregame practice indicated, the Brooklyn Excelsiors were equally dazzling in their fielding, making not only three double plays, but also a spectacular triple play. The latter came about in the sixth inning, when Creighton switched positions with left fielder Ed Russell. According to the Sunday Mercury:

“Mr. Shriver … was at the bat, while Sears occupied the third base, and S. Patchen (substitute for Hazlett) was on the second base. As Shriver struck the ball, both Sears and Patchen ran from their bases – pausing somewhat to witness the fate of the ball, which Creighton was after. … By one of the handsomest backward single-handed catches ever made by Creighton, he took the ball on the fly, and instantly, by a true and rapid throw, passed the ball to Whiting, who caught it, and threw it as quickly to Brainerd, on the second base, before either Sears or Patchen had time to return to their bases, thus putting three hands out ‘in a jiffy.’ But there was more yet in the ball; for Brainerd hardly received it from Whiting before it was on its way from his hands to Pearsall, who caught it in his own steel trap style, and made all the motions necessary to put out another hand, if there were any ‘lying around loose.’”

The batting of the visitors was similarly dominant, generating outbursts of 6, 6, 7, 12, and 13 runs in the first, fourth, fifth, sixth, and eighth innings en route to a 51-6 victory. After the final out, a scrub match was played for a while, and then a group of 50 people sat down to a sumptuous dinner, “served up in the French style,” at Guy’s Monument House. After various toasts, the group adjourned at around 11 P.M.

The Brooklyn Excelsiors departed the following afternoon on the 6 P.M. train and arrived four hours later in Philadelphia. After a stay overnight at the Continental Hotel, they spent the morning visiting various objects of interest. By this time, however, the busy schedule was taking its toll. The Sunday Mercury reporter observed: “They felt somewhat fatigued and worn out, by travel, the loss of sleep, and other exertions, and were not in as good order as they could have wished, to contend with the picked players who were to be brought against them.”

The situation was made worse when the Excelsiors players were obliged to walk quite a distance to the playing field at Camac Woods. The Philadelphia players, picked from the Equity, Olympic, Hamilton, Athletic, and Winona clubs, were also somewhat ill-prepared, having had no time to practice together. Thus the game, which resulted in a 15-4 victory for the Excelsiors, involved playing on both sides that was “very creditable, but not so spirited on the part of the Excelsiors as in the Baltimore match.” The Baltimore Republican reporter mentioned as “having excited our ‘special wonder,’ the daring, almost reckless catching of Leggett, and the swift, even pitching of Creighton,” while the Sunday Mercury noted that the Philadelphians were quite as much “taken down by Creighton’s peculiar pitching, as were the Baltimoreans.”

After the game, all of the players traveled to Schuylkill Falls, where they enjoyed a catfish supper, with appropriate fixings. At 11 P.M. the Excelsiors boarded the “owl train” and arrived back home at daylight. 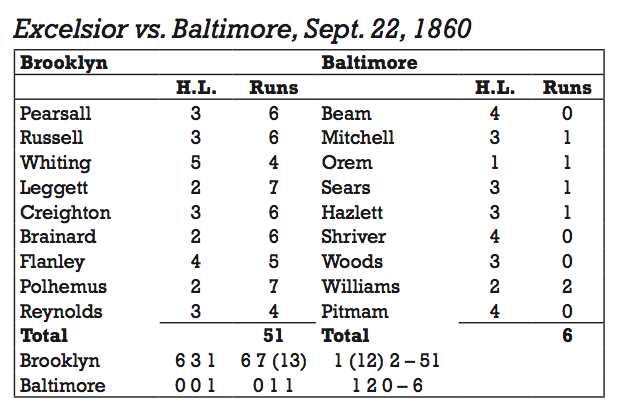