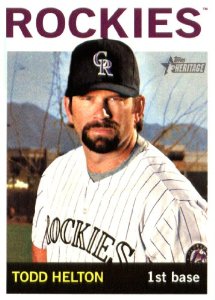 The day was a typical mid-September day in Denver, Colorado: cool, partly cloudy skies with a slight 9-mph breeze blowing from left field making the game time temperature 59 degrees. The Colorado Rockies entered the game with a record of 69 wins and 84 losses; they had already been eliminated from post season contention. The St. Louis Cardinals were in first place in the National League Central Division with a record of 89 wins and 63 losses. There was a lot more at stake for them in this game than the Rockies. The Cardinals had a 2-game lead over the Pittsburgh Pirates and 2.5-game lead over the Cincinnati Reds. All three teams were assured at this point in the season of making the playoffs. There were still two questions remaining, though. Which of the three teams in the National League Central would win the division and which of the other two would host the wild card game? In addition, the Cardinals were only one game behind the Atlanta Braves for the best record in the National League and home-field advantage for the playoffs. Adding to the Cardinals’ anxiety was the fact that Pittsburgh was at home for a game that was to start a little more than 2 ½ hours before their game in Colorado. In addition, Atlanta was playing in Chicago in a game which was to start 50 minutes prior to this game. Plenty of scoreboard watching for the Cardinals.

As Todd Helton had already announced his retirement at year’s end, this game was the first of his final six home games. The pitching matchup could be described as veteran vs. rookie. For the Rockies, it was 36-year-old Roy Oswalt, considered the number five starter in the rotation. The Rockies’ number five starters for the year had a terrible record and they kept running pitchers in and out trying to find something that would work. The Cardinals, on the other hand, were starting a rookie sensation (who would become more of a sensation during the following playoffs), Michael Wacha, who was making his eighth career start.

The game started with leadoff batter Matt Carpenter walking, not a good omen. However, the next two batters lined and flew out to the outfield. This brought up Carlos Beltran, the cleanup hitter. Oswalt started him off with a called strike, two balls and then threw to first twice before delivering another ball. On a 3-1 pitch, Oswalt threw twice more to first. On the second one, Helton decoyed a throwback to the pitcher and when Carpenter stepped off the base to dust off his uniform, Helton tagged him out on a successful hidden ball. Asked about it later, Helton said he had never tried it before but it was on his bucket list and now he could cross it off.

From there, the game progressed without much excitement until the bottom of the second. As the out of town scoreboard told everyone that Pittsburgh had won their game 10-1, the Rockies came to bat with Helton leading off. In his career with Colorado, Todd Helton was known for three things; excellent defense, good on-base percentage, and his slugging of doubles and home runs, resulting in a good career OPS (eleventh all-time of those who played in over 2200 games). Leading off the second, Helton hit a double and was eventually driven in by Yorvit Torrealba for the first run of the game.

In the bottom of the third inning, after Corey Dickerson singled, Troy Tulowitzki homered to make the score 4-0, Rockies. In the top of the fourth; Oswalt could not perform a shutdown inning and the Cardinals scored three runs to narrow the deficit. In the top of the fifth, the Cardinals tied up the score and Oswalt was relieved after 4 2/3 innings. With Colorado threatening to score in the bottom of the fifth, Wacha was relieved, also after 4 2/3 innings, first by Randy Choate, then Seth Maness who succeeded in holding Colorado scoreless. The score remained 4-4 until the eighth inning.

In the top of the eighth, the Cardinals went ahead as Matt Holliday singled and David Freese doubled later to bring him in – good two-out hitting! The Rockies countered in the bottom half with a run of their own on a double by Charlie Blackmon and a triple by Corey Dickerson, another fine piece of clutch hitting.

In the top of the ninth, Matt Adams singled and was pinch run for by Kolten Wong. Two batters later Jon Jay hit a single sending Wong to third. Holliday then singled to score Wong and Jon Jay went to third. On his first pitch, Rex Brothers threw a ball that hit so hard against the brick wall of the backstop, it bounced back to Torrealba who tagged Jay out as he attempted to dance around Torrealba trying to avoid the tag.

The Cardinals with a 6-5 lead had their closer Edward Mujica on to pitch the bottom of the ninth. The first batter he faced was Helton. The previous night in the bottom of the ninth, with the bases loaded and two outs, these two faced off and Helton struck out. This was another day however and on the second pitch, Helton hit a home run into the Rockies bullpen to tie the game. On to the tenth.

The game went into the fifteenth. For the Cardinals, innings 10 through 14 featured them getting only one person on base, via a walk in the twelfth inning. The Rockies did not do much more during the same span, a single in the eleventh, and a single and a walk in the 13th. In the middle of the 14th, another seventh inning stretch, which did not immediately inspire the home team.

The 15th inning was one of great excitement all around. The Cardinals turned a walk, a single and an intentional walk into a bases loaded situation with only one out. But the Rockies reliever Rob Scahill, got Pete Kozma to ground into a short-second-first double play. Disaster averted.

The bottom of the 15th began with Blackmon striking out, followed with a single by D. J. LeMahieu. Dickerson then tripled to right. LeMahieu slid in under the tag to score, beating Beltran’s throw. Because LeMahieu was on first and Dickerson ran all the way to third, his hit went as a walk-off triple, a rare occurrence. The Rockies had triumphed, winning 7-6, in 5 hours and nine minutes and 15 innings before 33,258 fans.

What makes this game of interest to the author is that he knew it would be his last opportunity to see Todd Helton play at Coors Field. The author was not disappointed as Helton made several good defensive plays, hit a double and a home run and was on base three times.

There are no direct quotes, but the following were used to refresh the author’s memory: