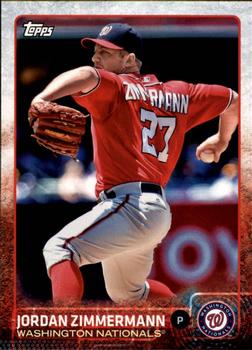 When Jordan Zimmermann (12-8) took the mound on a warm late-summer afternoon, he could not have known that he would earn his final win in a Washington Nationals uniform. He knew, of course, that the season for the Nationals (76-71, eight games back of the New York Mets in the National League East) was coming to an end, with no postseason in sight.1 He also knew that he would be a free agent at the end of the season, leaving the team that drafted him in 2007.2 It had long been rumored that he wanted to pitch closer to his Wisconsin home and therefore would not return to Washington in 2016.3

Over the last three seasons, Zimmermann was 7-1 against the Miami Marlins (64-84, 20½ games back of the Mets in the National League East), with the sole loss coming earlier in 2015 on July 28. On the other hand, Brad Hand (4-6) had had no success at all against the Nationals: he was 0-7 in his career.

Dee Gordon stepped in to face Zimmermann at 4:05, with the shadow of the stadium partway between home plate and the mound. Gordon opened with a single to third: First baseman Tyler Moore fumbled the catch at first, but Gordon would have been safe anyway, even with a good throw by Yunel Escobar from third. But Gordon was out at second when Ichiro Suzuki hit into a fielder’s choice. Ichiro then scored from first on Christian Yelich’s double. Wilson Ramos couldn’t quite get the sweep tag on Ichiro at the plate even with a strong relay throw from Ian Desmond. Justin Bour singled on the next pitch, allowing Yelich to score when the throw in was not accurate or in time. Bryce Harper, fighting the sun, was able to track down a Marcell Ozuna fly ball in right for the second out. Second baseman Anthony Rendon dove on a ball hit by Derek Dietrich and threw to first to end the inning with the score 2-0, Marlins. Perhaps that should have been expected: This was the third game in a row the Marlins had scored two in the first inning, including the previous two games against the Nationals. The only event worth mentioning in the bottom of the first was Escobar setting a personal record with his 159th hit of the year.4

In the second, J.T. Realmuto singled up the middle. He advanced to second on a Miguel Rojas groundout, then to third on Hand’s “excuse me”-swing groundout. But he was left on third when Gordon struck out. In the bottom of the second, Jayson Werth and Desmond both flied out to the warning track. Michael A. Taylor singled up the middle past a diving Gordon, and then Ramos walked, bringing up Moore with two on, two out. But he struck out on a foul tip, so the scored stayed 2-0, Marlins.

In the third, Zimmermann gave up a single to Bour, but nothing else. He came up to bat in the bottom of the third: Ichiro managed to track down his fly ball, shielding his face with his glove from the afternoon sun. Hand walked Rendon on four pitches, but induced outs from Escobar and Harper.

Zimmermann opened the fourth by hitting Dietrich with his first pitch. Realmuto lined out, but Rojas singled to right, bringing up Hand. Hand bunted effectively in front of the plate to advance both runners. Gordon earned a full-count walk to load the bases, but nothing came of it: Ichiro swung so hard at the third strike that he corkscrewed himself into the ground at the plate. In the bottom of the fourth, Werth followed Ichiro’s example by corkscrewing himself while striking out. Desmond made a bid for a home run that Ichiro caught at the bullpen fence, then Taylor struck out to end the inning.

In the fifth inning, Zimmermann finally worked a 1-2-3 inning, perhaps aided by the shadows on the field, which can make it difficult for the hitters to pick up the rotation on the ball. In the bottom, after Ramos struck out, Moore hit his fifth homer (his second off Hand) to put the Nationals on the board. Zimmermann singled for his ninth hit of the year.5 After Hand walked Rendon on four pitches for the second time, the relievers start getting up in the Marlins bullpen. Hand then walked Escobar on five pitches. Harper stepped to the plate with the bases loaded and the crowd fired up. After he got to a 1-and-2 count, he stepped out and discarded his batting gloves. In the eighth pitch of the at-bat, he cracked his bat bouncing a foul off the Marlins’ dugout steps. On the 10th pitch, he finally got a satisfactory pitch, hitting a sacrifice fly to score Zimmermann from third. Werth walked so the bases were loaded with walked batters. Desmond drew yet another walk, scoring Rendon to put the Nationals up 3-2. Marlins manager Dan Jennings pulled Hand for Andre Rienzo after the run-scoring walk. Rienzo stopped the bleeding: Taylor flied out to Ichiro on the first pitch, leaving the bases loaded.

Zimmermann worked a 1-2-3 top of the sixth inning, but with his pitch count at 95, the phone rang in the Nationals bullpen.6 Rienzo continued pitching for the Marlins in the bottom of the inning. After getting Ramos to ground out, he gave up a double into the left-field corner to Moore, who beat the throw by a step. Moore advanced to third on a groundout by Matt den Dekker (pinch-hitting for Zimmermann), but was left there when Rendon lined out.

Felipe Rivero, a Nationals lefty reliever, worked an efficient 1-2-3 top of the seventh. Jennings called on Kyle Barraclough to face the Nationals in the bottom of the seventh. It did not start well: After he walked Escobar, Harper hit his 41st home run of the season into the second deck over the Nationals bullpen, bringing the score to the final 5-2, Nationals. Harper rounded the bases to chants of M-V-P throughout the park.7 Barraclough proceeded to walk Werth, but then settled down and got three outs to get out of the inning without further damage.

Nationals manager Matt Williams tried Sammy Solis to start the eighth, but had to pull him after he gave up singles to Yelich and Bour. Williams pulled Solis for Blake Treinen, who started his outing by getting Ozuna to ground into a 5-4-3 double play. That left just the runner on third for Dietrich, who swung over a pitch almost in the dirt for the third out. In the bottom of the eighth, Scott McGough needed only eight pitches to dispose of the three Nationals he faced.

Given that the Nationals were up by only three, Williams called on the Nationals’ closer, Jonathan Papelbon, for the ninth. He started by giving up singles to Realmuto and Rojas. He got one out on a fielder’s choice by Casey McGehee (pinch-hitting for McGough), then got Gordon to ground into a double play to end the game. It was Papelbon’s seventh save for the Nationals.

Although Zimmermann pitched again for the Nationals on September 25 and 30, he took losses in both games. In his last game at Nationals Park, he was pulled between innings, denying the fans a chance for a final farewell.8 The Nationals fans did not forget: They cheered him when he returned the following year, pitching in a Tigers uniform.9

Jordan Zimmermann’s final strikeout (J.T. Realmuto) in the sixth inning is pictured below. The author acquired this ball from the Nationals Authentics. 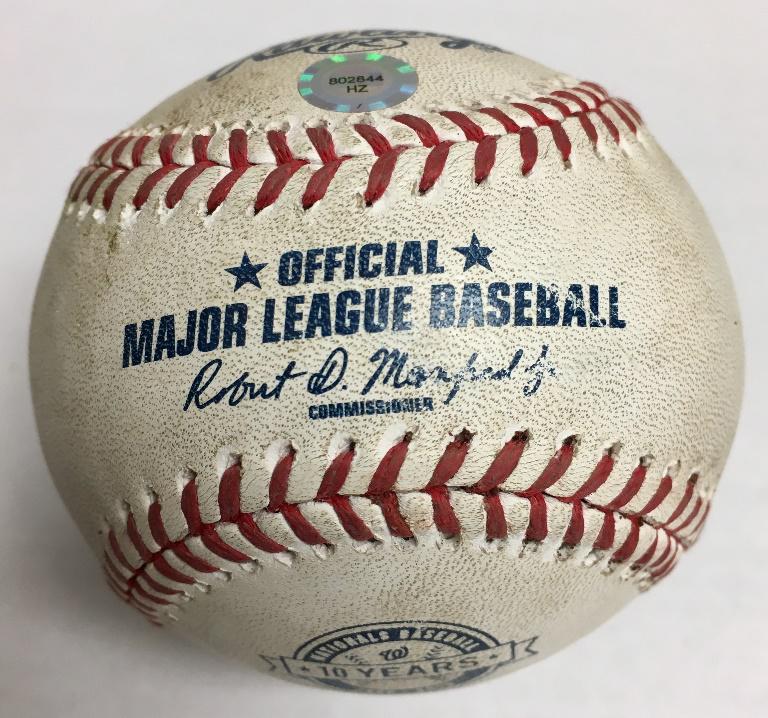 1 The Nationals were virtually, although not yet mathematically, eliminated from the postseason.

4 He finished the year with 168 hits, the best year of his career. baseball-reference.com/players/e/escobyu01.shtml.

5 Zimmermann was batting a not-embarrassing-for-a-pitcher .138.

6 The ball from his final strikeout in the game (Realmuto, second out of the sixth inning) is above.

7 He was the unanimous first choice for MVP in 2015. baseball-reference.com/players/h/harpebr03.shtml#all_leaderboard.