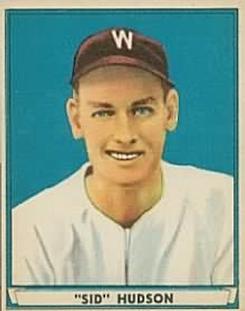 The fans had reason to question the wisdom of manager Bucky Harris back in February when the team spent $5,000 for a 22-year-old 6-foot-4 right-handed minor leaguer. He won 24 while losing only 4 but that was for Sanford in the Class D Florida State League. That kid, Sid Hudson, was anything but a sure thing. After a good spring training, manager Harris praised Hudson, calling him “the best looking young pitcher since Schoolboy Rowe broke in with Detroit.”1 The results that followed were uninspiring. Hudson’s low point may have been his part in an 18-1 loss to the Cleveland Indians on May 23. He was driven from the mound in the first. His record sank to two wins against three losses. But Bucky retained his faith in Hudson.2

It was justified. By August 15, The Sporting News referred to Hudson as Cinderella Sid the boy wonder.3 Hudson had pitched two one-hitters, against the Browns on June 21 (no-hitter broken up in the ninth) and against the Athletics on August 6 (no-hitter broken up in the seventh). In between the one-hitters, he had a string of six straight victories.

An excited crowd of 23,000 filled Griffith Stadium on Labor Day, September 2, when Cinderella Sid was scheduled to pitch the first game of a doubleheader against the Boston Red Sox.

Hudson’s opponent, the venerable Robert Moses Grove, came as a surprise. Grove, the legendary lefty who led the great Athletics teams of 1929-1931, was pitching in his 16th major-league season. He had eight 20-win seasons to his credit, including a most impressive 31-4 record for the 1931 Philadelphia Athletics. Entering the game he stood at 292 career victories. The last time Grove faced the Senators, he drove a foul ball off his foot and suffered a broken bone that the Red Sox said had probably finished him for the season.4 In that August 11 game, Hudson had bested Grove, 2-1, thanks to the ninth-inning heroics of Buddy Lewis, who threw out pinch-runner Tom Carey carrying the tying run.5 That Grove was making this start with the injured foot was attributed to the slide of the Red Sox in the standings. They had been leading the American League as late as June 19 with a 31-18 record. Their slide had brought them to fourth place by Labor Day, seven games out of first with a 69-58 record. The Senators had spent their season firmly entrenched in the American League’s second division and at game time were in sixth place with a 52-73 record.

In the top of the first inning, Doc Cramer tripled to the center-field corner with one out. Hudson pounced on a slow roller by Jimmie Foxx and ran at Foxx for a tag out. Cramer held at third. Hudson then fanned Ted Williams. In the fourth inning, Williams tripled to the center-field corner with two out but Hudson struck out Joe Cronin. In the fifth, George Case misjudged and then failed to catch a long drive by Bobby Doerr, allowing Doerr to reach second with no outs. Doerr moved to third on Lou Finney’s groundout. Shortstop Jimmy Pofahl grabbed a ball that third baseman Cecil Travis had muffed, preventing Doerr from scoring. Grove attempted to squeeze the run in with a bunt but Hudson jumped on the ball and Doerr was tagged out in a rundown. Dom DiMaggio made the third out by grounding back to the box. In the seventh, Doerr doubled to left with one out but Hudson easily disposed of Finney on a fly ball to George Case and then whiffed Charlie Gelbert. Catcher Rick Ferrell short-circuited a potential Red Sox rally in the ninth. The 11th inning brought more drama for Hudson. Doc Cramer led off the inning with a single to center. Jimmie Foxx followed with another single to center, sending Cramer to third with no outs. At this point second baseman Jimmy Bloodworth took his turn in the heroics spotlight. After a great play on a grounder by Williams, Bloodworth tagged out Foxx going from first to second, held Cramer on third, and threw out Williams at first for the double play. Cronin then flied harmlessly to Gee Walker for the third out. In the 13th inning, Cramer doubled to center with two out. Harris ordered a walk to Foxx, and Ted Williams grounded into a force play to end the top of what was to be the final inning.

Meanwhile, while Hudson was showing incredible poise for a pitcher with so little experience, Robert Moses Grove was showing what experience could do. No longer the fireballer of old, the 40-year-old veteran used a baffling curve and guile to dominate the Senators. It was not until the ninth inning that the Nats got their first baserunner to third. Through seven innings Grove had allowed only two hits. In the eighth, Ferrell and Case singled with one out but Grove was up to the challenge. In the ninth, Cronin’s wild throw put Cecil Travis on base with one out but Travis died on third. The 12th was nearly the end for Lefty. A single by Jack Sanford, a walk to Pofahl, and an infield single by Ferrell loaded the bases with one out. Hudson struck out. Case lifted a fly ball deep to the center-field corner but Dom DiMaggio raced back and made a game-saving catch.

After three hours of great baseball, the climax arrived in the bottom of the 13th. Buddy Lewis led off the inning with a double to right field. The managerial wheels began to turn. Trying to set up a double play, manager Cronin ordered Gee Walker intentionally passed. The strategy was thwarted when Bucky Harris called for Cecil Travis to sacrifice Lewis and Walker to third and second. With the perfect execution of the sacrifice accomplished, Cronin intentionally passed Bloodworth to restore the double play. With the outfielders playing shallow to avoid a score on a fly ball, rookie Jack Sanford, who was hitting only .114 at the time, lined a single over the head of Ted Williams to drive in Lewis with the winning run, ending the marathon matchup between the rookie and the great veteran.

Lefty Grove would start three more games in the 1940 season, winning one and losing two. Two of his starts were complete games. His victory came in another 13-inning complete game in Detroit, on September 10. The 1941 season was Grove’s last. He started 21 games and pitched 10 complete games finishing with a 7-7 record. His final win was his career 300th at Cleveland on July 25, 1941. Grove officially retired as an active player on December 9, 1941. Sid Hudson finished his rookie year with three more wins and two losses for a 17-16 record. He followed that up in 1941 with a 13-14 record (an ERA more than a full run lower than his rookie year, 3.46) and an All-Star Game appearance. In 1942, his record slipped to 10-17. Like most players his age, Hudson lost the next three seasons to military service. He never quite regained his pitching effectiveness and finished a 12-year career in 1954 with a won-lost record of 104-152. Hudson finished his career with the Red Sox after being traded in 1952 for Walt Masterson, a teammate on the 1940 Senators.

Jack Sanford’s game-winning single was his fifth career hit and his first career run batted in. His career would be limited to parts of three seasons (1941, 1942, 1946), during which he collected 32 hits in 153 at-bats with only 11 RBIs.

In addition to the sources cited in the Notes, the author also accessed Retrosheet.org, Baseball-Reference.com, SABR.org, and the following: