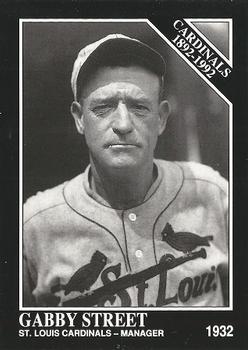 Charles Evard Street’s long winding path to St Louis had a full share of twists, turns, and moments of high drama. He was born in Huntsville, Alabama, on September 30, 1882. It was said about him that he became a catcher because he was naturally “pretty tough” and possessed a good arm and a chattery brand of leadership.1

“Gabby Street,” mused Walter Johnson in 1931, about his old batterymate, “for two years was the greatest receiver I ever saw. Golly, how I wish I had his equal in there catching for the Senators today. He’d be worth a million dollars to me. He’d mean a pennant.”2

There was no pennant when Gabby Street was with Johnson and the Senators between 1908 and 1910. In 1911 he was an integral part of Johnson’s pitching success, building on a mutual understanding of the game, describing how they “never wasted a pitch, never bothered with signals, that he just threw them where Gabby held the glove.”3 Kind words crediting a batterymate with a significant amount of his own success; their partnership did not contribute to a pennant, but Gabby Street was finally rewarded, albeit without Walter Johnson, with the St. Louis Cardinals in 1930 and 1931.

He paid his baseball dues. First with Cincinnati in 1904, a brief three-game stint on loan to the Boston Braves in 1905 then back to Cincinnati, four years (1908-1911) with Washington, where he was Walter Johnson’s batterymate, and ending with a season in New York. But he was hardly done with baseball. He played five years in the minors with Chattanooga and Nashville from 1913 to 1917. World War I diverted his attention in 1917-18 after he enlisted in the Army’s Chemical Warfare Service. After he returned, he caught for minor-league teams, advancing to manager in 1920 in the Virginia League. Through the 1928 season, he managed a number of minor-league teams.

In 1929 Street returned to major-league baseball as a coach for the St. Louis Cardinals, and was given one shot in one game as manager. In 1930 he was manager all the way. He was certainly successful as he managed the Cardinals to a pennant in 1930, and celebrated another pennant in 1931. In scanning Gabby Street’s statistics, there is a curious addition, noting that he played in one game in 1931, three innings, one at-bat and no hits. So why after so many years after having retired from his position behind the plate had Street again appeared in baseball records?

The Philadelphia Athletics earned their third American League pennant on September 15, 1931, commemorating the milestone with a decisive 14-3 win over the Cleveland Indians. The next day the Cardinals clinched the National League pennant when Cincinnati defeated the New York Giants and the Cardinals defeated the Phillies 6-3 for a clean sweep of a six-game series. Gabby started a rest cure for some of his veterans in the sixth inning of that game when he benched all but the pitcher, Bill Hallahan, and sent in substitutes to finish the game.4

With the second pennant in two years now won, the Cardinals celebrated the moment, not in the boisterous, noisy manner of the pennant win in 1926. Instead, St. Louis fans turned out with horns, noisemakers, and confetti. They walked, or rode around the city in cars, many of which were made to backfire, which added to the celebratory cacophony. The World Series was set to start in St. Louis on October 1.

As teams wound down the season, winners and losers spent time playing city series, old-timer’s games, and charity games to benefit victims of the Depression, and settling up their excuses for poor performances. The Cardinals also set about having some fun. Before the September 20 game with Brooklyn, the Cardinals put on a “field meet” in which players competed for nothing more than glory. It proved to also be potentially hazardous for players who were looking forward to World Series baseball.

The Cardinals won four of the five field events. Frank Frisch won the 75-yard dash with Denny Sothern of Brooklyn second. Ernie Orsatti came in third, but he redeemed himself by winning the challenge circling the bases. Cardinals catcher Gus Mancuso won the accurate-throwing contest, throwing from home plate to second base. The 75-yard dash among pitchers was won by Brooklyn’s Van Lingle Mungo. Cardinals third baseman Sparky Adams won the bunt challenge to first base, but in the base-circling event shortly afterward, he sprained his ankle rounding first base. In a show of solidarity with his team, Gabby Street was a contestant in the competition for accurate throwing to second base.

When the lineup was announced before the start of the game, the 18,000 St. Louis fans in attendance shouted their surprise and approval: starting pitcher, Syl Johnson; catcher, Gabby Street, a battery reminiscent of the old Johnson-Street battery of the Senators. Babe Herman, Brooklyn’s right fielder, apparently thought Street’s long retirement from behind the plate would affect his ability to stop a steal to second, and was surprised when the ball arrived at second before he did, that the “savage” still had power, vision, and judgment equal to the occasion.5 Babe Herman would reap his revenge in the third inning.

St. Louis, September 21, 1931. — “Today’s battery, Johnson and Street.” Diamond followers who thrilled to that cry years ago when Walter Johnson and Gabby Street of the Washington Senators formed the most famous battery in history, heard it once again here Sunday. Street, now piloting St. Louis’ championship Cardinals, returned to active play for the first time since 1928, when he played with Knoxville in the Southern League, and caught three innings against Brooklyn. His pitcher was Sylvester Johnson, completing the “Johnson and Street” battery. Street showed he still retained his throwing ability by tossing out Babe Herman, the only Robin who attempted to steal. He was at bat only once and flied out to Herman.6

The fans loved it. Ovations usually given to victorious pitchers went this day to Gabby Street as he stepped up to the plate in the third inning. After two foul balls and one ball had been marked against him, Street hit a long fly to Herman in deep right. Gabby then decided that he and Syl Johnson had had enough fun by the end of the third inning and sent in Allyn Stout and Mike Gonzalez in the fourth.

Brooklyn defeated St. Louis, 6-1, but most of the Cardinals regulars had been given a rest. Sparky Adams was out for several days with that sprained ankle. St. Louis turned its attention to the World Series. Gabby Street celebrated his 49th birthday on September 30. There was no time to celebrate, as he was immersed in the job of figuring out the next day’s pitching possibilities. The fact he was 49 didn’t seem to mean much to Street, but he did “want just one more thing.” That he explained, was to lead his club to a world’s championship.7

The Cardinals defeated the Philadelphia Athletics in seven games in the World Series.

In addition to the sources cited in the Notes, the author consulted baseball-reference.com, retrosheet.org, The Sporting News, and Total Baseball, seventh edition, 2001.