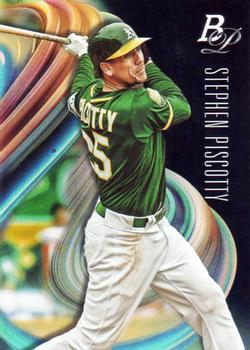 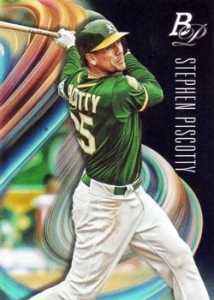 With nine games remaining in the season, 17,217 fans at the Oakland Coliseum saw the Oakland Athletics (92-61) inch to within 1½ games of the New York Yankees for the top spot in the American League wild card race.1 The A’s pounded Los Angeles Angels pitchers for 21 runs, the second most runs scored by the A’s in Oakland,2 and lowered their magic number for clinching a playoff spot to 4.

The Angels (75-78) were near the end of a disappointing season, destined to finish fourth in the American League West. Their only bright spot of the day was catcher Francisco Arcia, who became the only major leaguer to pitch, catch, and hit a home run in a game.3

Los Angeles struck first, in the top of the third off Oakland’s starting pitcher, Edwin Jackson (5-3, 3.17 ERA), who had escaped the first inning unscathed after the first two batters reached. After a 1-2-3- second, Jackson walked Angels right fielder Kole Calhoun with one out in the third, and Jose Fernandez doubled to deep right, scoring Calhoun.

Angels starter Matt Shoemaker (2-1, 3.98 ERA) breezed through the first inning with two strikeouts. In the second he pitched around two walks.4 But in the third Shoemaker gave up five runs and was driven out of the game. A’s catcher Josh Phegley led off with a single to left. Nike Martini singled to right and third baseman Matt Chapman doubled to deep left, scoring both runners. Jed Lowrie singled, sending Chapman to third. Shoemaker, on the brink of getting out of a disastrous inning, struck out Khris Davis and Matt Olson, but “left a slider over the plate that Stephen Piscotty blasted over the left-field fence for a three run homer.”5 Piscotty was continuing a great September that saw him hit .344 with 7 home runs and 22 RBIs. Shoemaker was pulled for Jim Johnson, who got center fielder Ramon Laureano to ground out to second, ending the inning.

In the bottom of the fourth the A’s struck again in a bigger way. As in the third, it appeared that the Angels were going to avoid a pounding, when Johnson gave up a leadoff single to Marcus Semien. Johnson was caught off first when Phegley lined out to center. But Martini reached on a throwing error by shortstop Andrelton Simmons and took third on a single by Chapman. Martini scored as Lowrie reached on an infield single to second. The next three batters – Davis, Olson, and Piscotty – all singled, each driving in one run. Junichi Tazawa replaced Johnson on the hill for Los Angeles and gave up a double to Laureano, scoring Olson, and a two-run single to Semien, batting for the second time in the inning. The barrage ended when Tazawa got Phegley to fly out to right, but the damage was done with a seven-run inning that was mostly produced with singles.

In the top of the sixth the Angels made a little bit of noise. Jackson, who had been cruising since the second inning, got Fernandez to line out to second. Mike Trout then smashed a 435-foot homer, his 36th of the year. A walk to Angels DH Shohei Ohtani brought Jackson’s day to a close. Reliever Emilio Pagan retired Justin Upton, who was called out for interference on his grounder down the first-base line. Pagan struck out Simmons swinging to end the inning.

After pitching a scoreless fifth inning for Los Angeles, Williams Jerez was replaced by Miguel Almonte for the sixth. Almonte gave up a leadoff double to Davis and walked Olson and Piscotty to load the bases with no outs. Laureano’s single to left scored one run and Semien cleared the bases with a double to left. Having given up five runs, Almonte was replaced by Deck McGuire. Phegley smashed a single up the middle, scoring Semien, Martini singled to center, and Chad Pinder, pinch-hitting for Chapman, walked to load the bases. Franklin Barreto, batting for Lowrie, grounded into a double play and Phegley scored. McGuire struck out Fowler to end the inning.

J.B. Wendelken took the mound for the A’s in the top of the seventh and set the Angels down in order. The Angels, either running short of pitching or in an attempt to save arms, moved catcher Francisco Arcia from behind the plate to the mound in the bottom of the seventh. Arcia retired his first two batters but gave up a single to Phegley. Martini and Pinder followed with back-to-back homers. Arcia got Barreto to fly out to center, bringing the seventh – as well as the Oakland scoring barrage – to a close.

The Angels had one last gasp left off the bat of catcher/pitcher Arcia. Chris Hatcher had come in to close out the game for the A’s in the top of the ninth. With two outs, Arcia drove a 3-and-2 pitch to right-center for a home run. Hatcher retired the next batter on a popup to third and brought the day to a close.

The A’s went on to qualify for the one-game wild-card playoff, their first postseason berth since 2014. They lost the wild-card game to the Yankees 7-2, bringing their successful run to a close.

In addition to the sources cited in the Notes, the author also consulted the ESPN game summary.