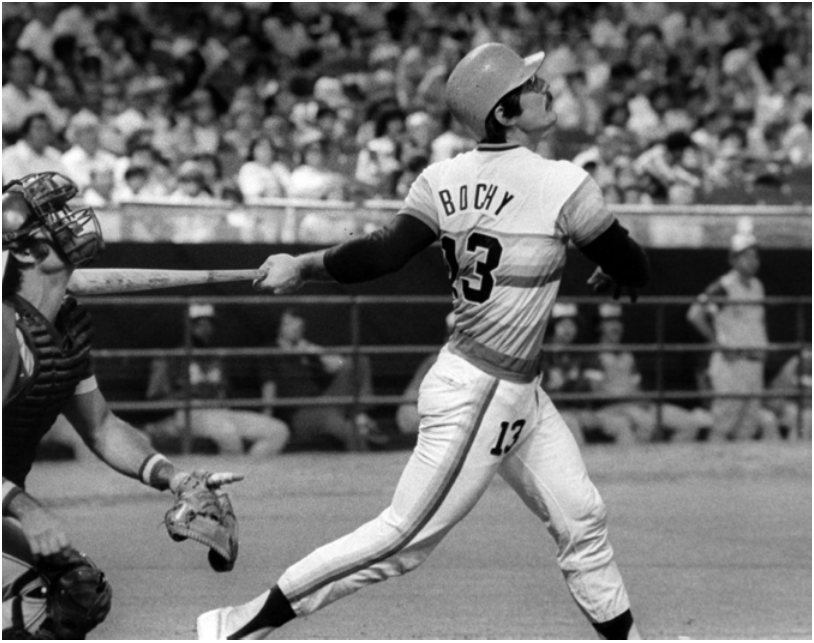 Since its opening in 1965, the Houston Astrodome, known as the “Eighth Wonder of the World,” had seen many epic and varied events that included sports, concerts, political conventions, and daredevil displays. It was big, like Texas, and the events were big as well. In fact, there wasn’t much that couldn’t be done there.

What the Dome had not seen in great quantity was pennant-race baseball. In fact, the best Astros team to date had been the 1972 squad, which won 84 games and finished 10½ games out of first place.

In 1979 things were different. The Astros were a preseason 75-to-1 longshot to win the championship,1 and expectations were low, But the team started off fast and didn’t look back. On July 4, the were playing over .600 ball and led the NL West by 10½ games. At the All-Star break, they led by 6 games. The lead dwindled and eventually evaporated, but as of September 21 it already was by far the most successful season in team history, and it wasn’t over yet. The fans were on board; attendance was at its highest since 1965, the opening year of the Astrodome.

The Astros were powered primarily by a much improved pitching staff whose two aces, J.R. Richard and Joe Niekro, went about their business in totally different ways: Richard with the heat of a nearly 100-mph fastball and a hard slider; Niekro with a repertoire of pitches, including a knuckleball, that at times seemed to be floating in slow motion.2

Houston needed the quality pitching because its hitting was certainly not going to carry the team. The Astros had finished in the lower half of the National League in runs scored and home runs each of the previous two seasons, and were at the bottom of those categories throughout the summer of 1979. The team’s most frequent cleanup hitter, Jose Cruz, had only eight home runs heading into late September. The second most frequently used cleanup hitter, rookie Jeffrey Leonard, had none. Throughout the season, manager Bill Virdon’s squad needed to manufacture runs, and they were among the league leaders in both sacrifices and stolen bases.

People around baseball wondered how the Astros were faring so well. The disrespect was out in the open throughout the league. After the Phillies were shut out by left-hander Randy Niemann on July 4, manager Danny Ozark complained, “How can we lose to Randy Niemann? Our Reading farm club could beat Niemann.”3 Also count the Cincinnati ace Tom Seaver among the skeptical. “Once they stop getting all those bloop hits, the Astros are going to drop through the West Division like a lead balloon. The Astros are the luckiest team I’ve ever seen.”4

While they hadn’t fallen out of the race as predicted, by the morning of September 21 the Astros had fallen 2½ games behind the division-leading Reds heading into a three-game series against Cincinnati. A sweep would put the upstart Astros back on top of the standings with a week remaining in the season. A crowd of 44,975 witnessed the opening game of what appeared to be the most crucial series in the team’s existence so far.

On the hill for the hosts was Richard, a 6-foot-8 right-hander who was 16-13 with a 2.92 ERA. After three straight seasons with 18 or more wins, he had started off slowly, and was only 7-10 at the All-Star break. He recovered well in the second half, and was 9-3 since the midsummer classic, including a 5-1, 0.67 August in which he completed all six of his starts. Richard was scary to hit against, as he mixed his fastball with a nasty slider.5 Even teammates were loath to dig in on him, with longtime Astro Bob Watson claiming, “I’ve never taken batting practice against him and I never will. I have a family to think of.”6

Toeing the rubber for the Reds was Astros antagonist Seaver, who sported a 15-6 record and a 3.27 ERA. Already an icon, Seaver came into the game with 234 career victories. While his power arsenal was slowing down a bit, requiring the use of more off-speed pitches,7 he was still among the elite National League pitchers. Going into the game, he had won 13 of his last 14 decisions.

This was the second matchup between the two strikeout artists this month. When they faced off on September 11 neither lasted past the sixth inning in a 9-8 Cincinnati victory that had knocked the Astros out of first place.

Richard cruised through the first inning, setting down Dave Collins, Joe Morgan, and Davey Concepcion. Seaver completed his first frame easily as well, giving up a single to shortstop Craig Reynolds, the Astros All-Star, who was erased by a double-play grounder off the bat of Cesar Cedeno.

In the top of the second, the Reds got two runs on a two-out single by Dan Driessen and a home run by Ray Knight, completing a wildly successful season in which he replaced the departed All-Star Pete Rose at third base. The Reds led 2-0, but they would score no more runs against Richard. The big right-hander allowed only one runner past second the rest of the contest, and struck out 11 batters through nine innings.

Houston got on the scoreboard in the third inning. After an error by Driessen on a grounder by Richard, Terry Puhl drove a run-scoring single to center. In the bottom of the seventh, Houston tied the game with a typical “rally” – a single (by Rafael Landestoy), a sacrifice (by Richard), and another RBI single by Puhl.

At the end of nine innings, the game was tied 2-2. A Houston loss would put them 3½ games behind the Reds with nine games left in the season, making their task of catching Cincinnati significantly more difficult.

Finally, after 11 innings, 143 pitches and 15 strikeouts, Richard left the game. It was an epic performance in the midst of the first true pennant race in the team’s history. Would it be enough? In the 12th, Virdon turned to left-handed reliever Joe Sambito, who earlier in the season had a streak of 40⅔ innings without allowing an earned run. The All-Star Sambito held the Reds scoreless another two innings.

In the bottom of the 13th, Reynolds led off with a single off Hume. Cedeno, playing true Astro baseball, bunted him to second. Reds manager John McNamara had Hume intentionally walk Cruz and, after Enos Cabell grounded into a fielder’s choice at second, rookie Danny Heep also walked, loading the bases.

Walking to the plate for perhaps the most important at-bat of the season was backup catcher Bruce Bochy, a .213 hitter coming into the game. Bochy had become a semi-regular after a season-ending injury to starting catcher Alan Ashby in August. In the biggest moment of his young career, Bochy singled to left, and the opener of this series went to Houston, 3-2.

The Astros were now 1½ games in back of the Reds. With Niekro starting the next day’s game, and the following week filled with road games against sub-.500 teams, the Houston faithful could be excused for dreaming about their team’s first postseason appearance.8

8 Niekro won on September 22, bringing the Astros to within a half-game of first. But they went 3-5 in their remaining games, and finished in second place behind the Reds. Emboldened by their 1979 improvement, the Astros added Nolan Ryan and Joe Morgan as free agents for 1980, and went on to win the National League West division title.