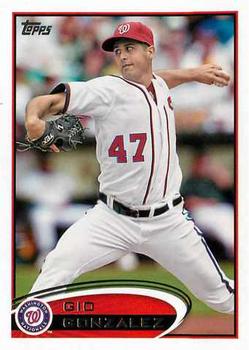 It was a perfect September afternoon for a ballgame in Washington: 78 degrees and sunny. A sellout crowd of 40,493 awaited the game and a postgame concert by Dierks Bentley. The Nationals fans were hoping to see Gio González (19-8, 2.95 ERA) become the first 20-game winner of the season. While at the ballpark the fans were buying their first Nationals postseason gear. The Nationals (91-59, best record in baseball) had clinched a wild-card slot two nights earlier. Although they were up 5½ games over Atlanta, they had not yet clinched their first NL East title.1 Their magic number to do so was seven. For their part, the Brewers (78-72) were riding a six-game winning streak, including taking the first game of the four-game series with the Nationals the night before. They stood 12½ games behind Cincinnati in the NL Central but only 1½ games back of a wild-card slot.2

Gio opened the first with a strikeout of Nori Aoki: He swung at a curve after it was in Kurt Suzuki’s glove. After Rickie Weeks grounded out to first, Ryan Braun3 rolled one between Ryan Zimmerman at third and Ian Desmond at short for a single. But Aramis Ramírez grounded to short for a force out at second to end the half-inning. Wily Peralta, making only the fourth start of his major-league career, took the mound for Milwaukee. Jayson Werth worked the count full, finally walking on the eighth pitch. Bryce Harper was out swinging on a 3-and-2 count: Werth tried to steal but was thrown out by an on-target throw by Martín Maldonado. Zimmerman beat out an infield single (later changed to an error on the pitcher for not fielding the ball as it passed over the mound), but Adam LaRoche hit a broken-bat grounder right to first to end the inning.

In the top of the second, Gio got three quick groundouts on 11 pitches. In the bottom of the inning Michael Morse worked the count full: another walk on eight pitches. Desmond singled up the middle; Jean Segura corralled the ball but had no time to throw. With Danny Espinosa batting, Peralta uncorked a wild pitch off Maldonado’s shoulder pad, allowing both runners to advance. To no one’s surprise, Espinosa struck out.4 Suzuki tried for a sacrifice fly to right: Aoki’s throw in was right on target so Maldonado tagged Morse almost six feet up the third-base line.

Segura started the third inning with a swinging bunt that beat Zimmerman’s throw to first. Peralta tried to bunt for his second career hit: He awkwardly stabbed at the ball three times and was called out. With Aoki batting, Segura stole second. Aoki popped out to Desmond in short left field: Desmond fought the sun but found the ball at the last second. With Weeks batting, the home-plate umpire granted time after Gio was in his pitching motion. That seemed to fluster him a bit: Weeks hit one hard, but Harper made a great catch over his shoulder at the edge of the warning track, saving at least one run.

The scoring started in the bottom of the third. After Gio struck out, Werth doubled down the right-field line. Harper doubled down the left-field line, scoring Werth. With Zimmerman batting, Harper took a big lead off second, and when Maldonado threw to second, Harper dashed safely to third. After Zimmerman struck out, LaRoche doubled on the 10th pitch, scoring Harper. Morse walked again, then Desmond hit one to Segura near third. He threw the ball past second so Morse made it to third and LaRoche scored. Espinosa walked on four pitches. When Suzuki (ninth player to bat in the inning) stepped to the plate, Brewers manager Ron Roenicke pulled Peralta for Liván Hernández, the former National.5 Suzuki popped out, leaving the bases loaded but Nationals had scored three.

In the top of the fourth, Gio got his team back in the dugout quickly: three outs on nine pitches. He followed that approach himself: He hit Hernández’s first pitch for a groundout. After Werth singled and Harper walked, they both advanced on a wild pitch. They could have stayed put: Zimmerman homered. LaRoche and Morse each singled. Desmond homered for the second three-run homer of the inning, making the score 9-0, Nationals and bringing Roenicke out for another pitching change. Josh Stinson walked Espinosa on four pitches but got Suzuki to ground into a double play to end the inning.

Nothing for the Brewers in the top of the fifth but Gio struck out Segura for his 200th strikeout of the season, marking the first time a Washington pitcher had 200 strikeouts since Walter Johnson in 1916. In the bottom of the frame, Gio led off for the third inning in a row. Stinson’s third pitch was high and tight: The crowd gasped as Gio ended up in the dirt on his backside, but he popped up quickly and lined out to Weeks. Werth flied out, Harper singled, and Zimmerman struck out for a comparatively quick home half-inning.

The Brewers finally got on the board in the sixth. Aoki hit a ground-rule double into center. Weeks followed with a fly to center: The ball bounced off Harper’s glove. Braun grounded out scoring Aoki. Ramírez flied to Werth, scoring Weeks. (Both runs were unearned due to Harper’s error.) Pinch-hitter Jeff Bianchi grounded out to end the half-inning with the score 9-2, Nationals.

Tyler Thornburg pitched the bottom of the sixth. Nyjer Morgan (a former National) was announced into the game playing left field. He received a mixed reaction from the crowd.6 LaRoche hit one into the seats in right for his 32nd homer, tying his career high from 2006.7 The ball was grabbed by a guy holding his dog’s leash with the other hand (it was Pups in the Park day). After Morse got a base hit into right and Desmond grounded out, Espinosa blooped one into center. The crowd started cheering when Carlos Gómez dropped the ball on the transfer, but Ted Barrett, umpiring at first, called it a catch and an out. Suzuki lined out to leave the score at 10-2, Washington.

In the top of the seventh, Gómez grounded to LaRoche, who flipped the ball to Gio, who beat Gómez to the bag by a half-step. On the fifth pitch to Maldonado, Gio caught a cleat and went down face first in front of the mound. He stayed there for three or four tense seconds while the crowd held its breath. He got up, winced, and stretched his shoulder, while a crowd of trainers, umpires and players gathered on the mound. Gio said something into his glove that caused Zimmerman and LaRoche to start laughing: At that point the crowd realized that Gio was okay and started cheering. No one reported exactly what he said, but he did say later that all that was injured was his pride.8 He got back on the rubber, tipped his cap to the crowd, and struck out Maldonado on the next pitch. Segura tapped back to the mound and Gio left the field to a standing ovation.

Thornburg needed only nine pitches to dismiss the Nationals in the bottom of the seventh. The crowd barely had a chance to greet pinch-hitter Roger Bernadina with the “shark jaws” arm motions before he was out.9

Nationals manager Davey Johnson called on Christian Garcia to close out the game. Travis Ishikawa grounded out for the first out. Bianchi got a base hit to right. Taylor Green (a 25th-round pick with a .186 BA) hit the third and final home run of his career to bring the score to the final 10-4. Maldonado singled to center. After Segura struck out swinging for the second out, the crowd came to its feet. The camera panned to Gio nervously chewing his lip in the dugout. When Yorvit Torrealba swung through the 2-and-2 pitch to end the game, Gio made his way through the hugs and high-fives in the dugout to celebrate the victory on the field with his teammates with the crowd cheering behind him. And yes, there was a Gatorade shower.

Washington had its first 20-game winner since Earl Whitehill in 1933: coincidentally, the same year that a Washington baseball team last made it to the postseason.

I was at this game. You could feel the joy of finally having a winning team in DC suspended for those few seconds when Gio was face down on the field. The relief when the video board showed Zimmerman laughing at whatever Gio said was palpable.

1 Playing basically .500 ball to the end of the season, they finally clinched their first division title on October 1 when Pittsburgh beat Atlanta, during a game the Nationals lost to Philadelphia.

3Ryan Braun’s .600 slugging led the National League. There may have been an unsavory reason for that. ESPN, July 23, 2013, “Ryan Braun of the Milwaukee Brewers Suspended for Remainder of 2013 season,” espn.com/mlb/story/_/id/9500252/ryan-braun-milwaukee-brewers-suspended-remainder-2013-season. Accessed October 18, 2018.

4 Espinosa led the majors in strikeouts in 2012.

5 Hernández had pitched for the Nationals in 2005 and 2006, moving with them from Montreal. He returned in 2009-11. Reduced to a relief role with Atlanta and then Milwaukee in 2012, this was his next-to-last appearance in his 17-year career. He was greeted warmly by the Nationals fans.

7 LaRoche was having a good year. In addition to his career high in homers (33), he was named Wilson Defensive Player of the Year at first base, and won the Gold Glove and Silver Slugger Awards. He was sixth in the MVP voting.