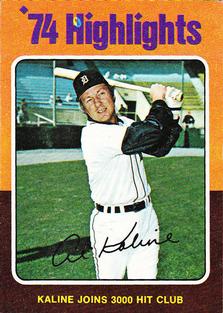 After 2,826 games, 11,564 plate appearances, and nearly 22 years in the major leagues, Al Kaline was heading to his hometown of Baltimore near the end of the 1974 season just one hit shy of a milestone which, at that point, had only been achieved by 11 major leaguers before him.

Kaline and his Tigers arrived in Baltimore for a two-game series with the Orioles beginning on Tuesday, September 24. It was on that night – in front of a sparse Memorial Stadium crowd of 11,492 – that Kaline would finally collect career hit number 3,000.

The 39-year-old Kaline had entered the season needing 139 hits – only 27 more than he had in all of 1972 and 1973 combined – to reach the milestone. As a concession to age, and perhaps to the importance of reaching the milestone, the 10-time Gold Glove Award winner had moved from his customary outfield position to the relatively new designated-hitter role for the 1974 season.

Left-hander Dave McNally was the starting pitcher for Baltimore on this evening, and Kaline was quite familiar with the four-time 20-game winner. Prior to this game – which would turn out to be the last-ever meeting between McNally and Kaline – the two had squared off in 123 plate appearances, with Kaline registering 28 hits in 110 official at-bats (.255 average), including five home runs.

As the game began, the Tigers’ record stood at 71-82, and since mid-August they had been languishing in the American League Eastern Division basement, where they would ultimately finish the season.

The Orioles, on the other hand, entered play on September 24 looking to move back into first place in the division, as their 83-71 record positioned them one game behind the division-leading Yankees.

The game began with McNally setting down the Tigers in order in the top of the first inning; Kaline, batting third in the lineup on this night, grounded out to shortstop Mark Belanger to end the half inning.

The Tigers’ starter on this night was 23-year-old rookie right-hander Vern Ruhle, who was making just the second start of what would become a 13-year major-league career.

Despite allowing three singles in the bottom of the first inning, Ruhle escaped without allowing a run. This was due in large part to catcher Bill Freehan throwing Rich Coggins out on a stolen-base attempt and a foul popout by third-place hitter Bobby Grich.

After a scoreless second inning, the Tigers plated a run in the top of the third when Ron LeFlore’s double to the right-center-field gap drove home ninth-place hitter Ed Brinkman, who had drawn a two-out walk. Gary Sutherland then lined out to second base to end the inning, leaving Kaline in the on-deck circle still on the brink of history.

Ruhle worked around a two-out double by Paul Blair in the bottom of the third inning, and the Tigers still led 1-0 when Kaline led off against McNally in the top of the fourth.

At exactly 8:20 P.M., McNally threw his first pitch of the inning – a fastball – and Kaline promptly sliced it down the right-field line.1 Right fielder Rich Coggins fished the ball out of the corner and fired back into the infield, where Kaline was already standing on second base.

On WJR radio, Tigers broadcaster Paul Carey – who was in the second season of what would become a 19-year run alongside Ernie Harwell on the Detroit airwaves – described the scene this way:

“There’s a drive down to right field into the corner; it’ll be in for a base hit, maybe extra bases. Al is digging for second. He’s in with a stand-up double. A two-base hit for Al Kaline, hit number three thousand in his fabulous career of 22 years as a member of the Tigers. Listen to this standing ovation. …”2

After Kaline’s historic hit, the game was stopped for about three minutes and Kaline was congratulated by his parents who were seated in box seats behind the Tigers’ dugout.

According to the Detroit Free Press, “The festivities following Kaline’s historic hit were remarkably brief, primarily because Al wanted them that way.”3

The ball and bat from the milestone were presented to American League President Lee MacPhail, who subsequently delivered them to the Baseball Hall of Fame in Cooperstown, New York.

“I hit a fastball that was sailing away,” Kaline told the Baltimore Sun after the game. “The ball was really curving and I thought it would go foul at first. I almost forgot to run when I hit it. … When I reached second, I said a little prayer of thanks to God for giving me a strong body.”4

When action resumed, McNally showed he was not rattled by the occasion, striking out Bill Freehan, getting Reggie Sanders to ground out to third baseman Brooks Robinson, and then catching Leon Roberts looking to strand Kaline at second and end the inning.

The Tigers held onto their 1-0 lead until the bottom of the fifth when Mark Belanger ignited a two-out rally by singling to left. Rich Coggins followed with a single to center and the Orioles had men on first and second when Paul Blair hit a routine fly ball to center field that dropped at the feet of LeFlore. Both Belanger and Coggins scored on the play, while Blair ended up at second on the two-base error charged to LeFlore.

LeFlore partially atoned for his error in the top of the sixth when he led off with a double. Gary Sutherland’s infield single sent LeFlore to third for Kaline, who drove a single to center – career hit number 3,001 – to score LeFlore and tie the game.

The Tigers could do no further damage in the inning, however, and the Orioles came to bat in the bottom of the sixth with the score knotted at 2-2.

Tommy Davis led off with a single to center and moved to second on a sacrifice by slugger Boog Powell, who was in the final weeks of his Orioles career.5 Don Baylor then singled to center to score Davis with the go-ahead run and knock Ruhle from the game.

Relief ace John Hiller came on to put out the fire, however, and the sixth inning ended with the Orioles leading 3-2.

This back-and-forth game saw yet another lead change in the top of the seventh when a drive by Ed Brinkman just reached the seats in left field for a home run, scoring Aurelio Rodriguez, who had singled with one out. This gave the Tigers a 4-3 lead – their last advantage of the game – and two batters later, Gary Sutherland’s single drove McNally to the showers in favor of right-hander Bob Reynolds.

Hiller and Reynolds each stopped the bleeding for their respective teams until the bottom of the eighth, when the Orioles again rallied. Don Baylor doubled to left field with one out and was doubled home by the next hitter, Brooks Robinson, tying the game at 4-4.

Hiller then uncorked a wild pitch that sent Robinson to third as the next hitter, Andy Etchebarren, stepped in. Etchebarren executed a perfect suicide-squeeze bunt, reaching safely on the play and driving home Robinson to give the Orioles a 5-4 advantage that they would carry into the ninth inning.

Reynolds then prevented any further drama for the evening, striking out Ben Oglivie, Gates Brown, and Ron LeFlore – the final two looking – to seal a 5-4 Orioles victory. Reynolds was the game’s winning pitcher, upping his record to 7-5, while Hiller missed an opportunity to add to his American League record for relief wins in a season, falling to 17-12.6

The win – coupled with the Yankees being swept at home in a doubleheader by the Red Sox – moved the Orioles back into first place where they remained through season’s end, winning their second consecutive AL East championship.

But while the Orioles celebrated a critical victory in the final days of the 1974 pennant race, Kaline and the Tigers were finally able to enjoy the future Hall of Famer’s career milestone and relax a bit now that the chase for 3,000 was finally over.

After the game, Kaline told WJR Radio, “I’m happy it’s over with and it’s tremendous. I’m very sorry in a way that I couldn’t wait and get it in Detroit, but if I didn’t get it there I’m very happy to get it here (in Baltimore) because I had a lot of relatives. My mom and dad were here and my sister and my wife’s relatives were here and I’m very happy that it’s over with. I’m very relieved that it’s all over and I’m just sorry in a way that we didn’t win because I think that would have just capped it off perfectly if we could have held on and won the game.”

In the eight games that followed this one, the Tigers won just once, with Kaline going 6-for-25 to close out his career, collecting his final hit – number 3,007 – on Tuesday, October 1, in a 7-6 loss to the Orioles at Tiger Stadium.

The Orioles went 7-0 after the September 24 battle with Detroit to finish the 1974 season on a nine-game winning streak, claiming the division by two games over the second-place Yankees. Baltimore lost in the American League Championship Series to the eventual World Series champion Oakland Athletics by three games to one.

In addition to the sources cited in the Notes, the author relied on Baseball-Reference.com and the WJR-AM play-by-play recording, available online at youtube.com/watch?v=Qx0eo4M5Y-g.

5 After the season the Orioles traded Powell to Cleveland.

6 Hiller finished the season 17-14. His 31 decisions came in 59 game appearances, none of which was a start.