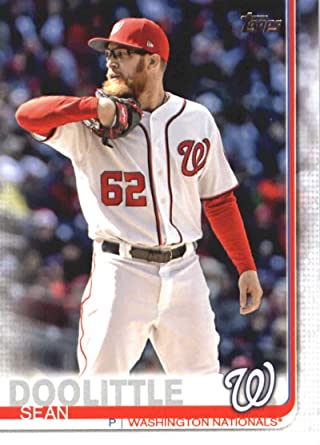 Yes, you read that headline correctly: The 2019 Washington Nationals bullpen actually set a good record rather than a bad one. True, their collective ERA for 2019 was a wince-inducing 5.66,1 but for one game in September, the Nationals bullpen was really good.

The Nationals (86-69) were nine games back of Atlanta with seven games left, so the NL East title was out of reach. A wild-card berth looked probable: With a “magic number” of 3, they would clinch a postseason berth if they won both games of the doubleheader and the Pirates beat the Cubs. The Phillies (79-76) had started the season strong, holding the division lead as late as June 11, but now were one loss from being eliminated from the postseason.

Joe Ross (3-4, 6.17 ERA) was pitching for the Nationals that afternoon after not having pitched in three weeks. Raudy Read, a September call-up, was catching. (The Nationals’ primary catcher, Yan Gomes, was scheduled to catch Max Scherzer in the evening game, and manager Davey Martinez continued to rest his other primary catcher, Kurt Suzuki,hoping he would be 100 percent if the Nationals made a run into October.2)

Ross started the game by walking Phillies leadoff hitter César Hernández. Bryce Harper stepped to the plate to boos: Throughout the 2019 season Nationals fans had consistently booed him since he signed with division rival Philadelphia in the offseason. Harper responded with a single into shallow left. Ross got the first out when Rhys Hoskins popped up, invoking the infield fly rule. Brad Miller dunked one into right but Hernández advanced only to third. The Phillies got on the board when Jean Segura hit a flare into center, but it was too shallow to score more than one run. That was all for the Phillies, though: Scott Kingery struck out and Adam Haseley bounced to first, leaving the bases loaded and the score 1-0, Phillies.

The Phillies had planned a bullpen game for this makeup game, the second of a five-game series. The game had been rescheduled from June 18 due to rain, creating the unusual series. Blake Parker (4.40 ERA) was making his first career start. (He had pitched 281⅔ innings in relief, beginning in 2012.) He seemed up to the challenge: Trea Turner fouled out to the catcher, Adam Eaton struck out, and Anthony Rendon grounded out for a quick inning.

Deivy Grullón started the top of the second by lining out on the first pitch, probably to Ross’s great relief since he threw 28 pitches in the first. Parker’s first major-league at-bat went about as you’d expect: He did swing at strike three but did not make contact. Hernández extended the inning by singling into right, but Harper grounded out to end the inning. The closest the Nationals got to a baserunner in the second was Juan Soto, who worked the count full and was walking toward first when he was called out on a not-quite-checked swing.

Ross seemed to be settling in by the top of the third. Although he walked Hoskins, he got Miller to pop up and Segura to ground into a double play. New Phillies pitcher Mike Morin continued the Phillies’ success in the bottom of the frame, collecting two strikeouts and a groundout.

Kingery singled on the first pitch to start the fourth and advanced on Haseley’s sacrifice. Kingery was left on base when Ross struck out Grullón and Jay Bruce to prevent any Phillies scoring in the fourth.

Ranger Suárez was the next pitcher in from the Phillies bullpen. He allowed the first Nationals hit: a double by Turner — which happened to be the 100th double of his career. Turner advanced on Eaton’s sacrifice and scored on Rendon’s fly to center. Haseley almost missed the ball due to the sun, a frequent problem in afternoon games in DC. Rendon was credited with his 123rd RBI, leading the majors.3 Soto grounded out with the game tied, 1-1.

Given the long gap since Ross’s previous outing, it was not surprising that 64 pitches over four innings were enough for him. Erick Fedde pitched the top of the fifth, a 1-2-3 inning helped by his defense. Hernández lined out to center. Harper lined out right to Turner, who was shifted perfectly to the right of second. Hoskins popped up: Brian Dozier fought the sun but found the ball in time for the out.

Suárez continued pitching the bottom of the fifth, striking out Ryan Zimmerman. Dozier dunked one over Hoskins’ outstretched glove at first for a single. Victor Robles hit a hot shot to third. Third baseman Kingery made a decent throw but Hoskins couldn’t squeeze the ball. It bounced away so Robles was safe. The Phillies were not charged with an error. The Nationals didn’t capitalize on the opportunity: Read struck out, as did pinch-hitter Howie Kendrick (against the Phillies’ next pitcher, Nick Vincent).

Tanner Rainey was the Nationals’ second reliever. Miller looked at strike three, argued the call, and was tossed by home-plate umpire Alan Porter. Phillies manager Gabe Kapler ran out of the dugout, too late to save his player from ejection, but didn’t get tossed himself although he had a lively discussion with Porter. Segura grounded to Turner for an easy out and Kingery struck out.

The Nationals untied the game in the sixth. Turner grounded toward second and beat the throw to first. Eaton doubled off the top of the scoreboard: The throw in from Harper missed all the cutoff men, but Turner held at third. Rendon hit a fly almost to the warning track, allowing both runners to tag, scoring Turner again. That called for a Philadelphia pitching change to a lefty to face Soto. José Álvarez got Soto to bounce right down the first-base line so Hoskins tagged him in the baseline. Zimmerman singled: 3-1, Nationals. As usual, Nationals players lined up along the dugout fence doing the “Baby Shark” finger motion to recognize the hit.4 Dozier walked but Robles struck out swinging to end the Nationals’ threat.

Fernando Rodney, the third Nationals’ reliever, pitched a 1-2-3 top of the seventh, perhaps grateful for some instant cloud cover that allowed Dozier to easily catch Grullón’s popup. Phillies pitcher Jared Hughes, their sixth of the afternoon, allowed only a two-out double to Turner in the home half of the seventh.

Sean Doolittle, who had been the Nationals closer for most of the year, came in to face Hernández, Harper, and Hoskins, none of whom had a hit against him this far in the season.5 Three outs later, that status had not changed.

Rookie Édgar García was the final reliever for the Phillies. Rendon was up first, clapping his hands when the announcer said “Everybody clap your hands.” Rendon fouled off several pitches: Chasing a foul pop, Hoskins hit the barrier on the first-base side hard, doing a shoulder roll in the dirt. He didn’t make the catch, nor was he injured. Rendon walked on the 11th pitch. Soto and Zimmerman walked to load the bases. Despite the bases-loaded-no-outs opportunity, the Nationals scored only one. Dozier hit a popup and Robles looked at strike three. They scored when García threw a wild pitch to Read: the Phillies’ catcher used a “one leg down” stance so he couldn’t easily scramble for the ball when it bounced under his arm. Read struck out but the score was the final 4-1, Nationals.

Daniel Hudson, who had been closing for the Nationals for most of September, faced Logan Morrison, Segura, and Kingery in the top of the ninth. Three fly outs and the game was over, eliminating the Phillies from the postseason.6 The Phillies finished fourth in the division at 81-81, 16 games back of Atlanta.

The much-maligned Nationals’ bullpen had posted five consecutive perfect innings in relief, the first time that had been done.7 The Nationals clinched a wild-card berth that evening on their way to winning the World Series in seven games over the Astros.

The author attended the game, consulted Baseball-Reference.com and Retrosheet.org, and viewed the recorded game at MLB.com.

2 Spoiler alert: They did make a deep run into October, winning Game Seven of the World Series on October 30. Suzuki played in 10 of the Nationals’ 17 postseason games, hitting a key home run in Game Two to break a 2-2 tie with the Astros.

3 Rendon finished the season with 126 RBIs, leading the majors.

7 The Dodgers had five relievers throw perfect innings in a 4-2 win over the Rockies on June 29, 2009, but that was in 13 innings and the five perfect relief innings were not consecutive.