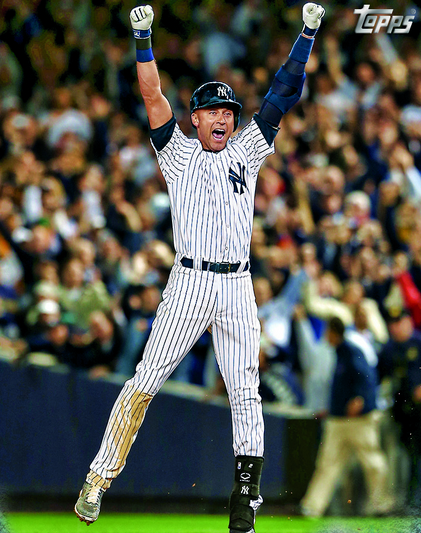 Thursday, September 25, 2014, was a rare day in New York. It was a day fans, players, and management of the Yankees had not felt in a long time, actually in over a decade. The previous night the Yanks had been eliminated from the playoffs for the second consecutive season. The Yankees had not missed consecutive playoff births since the 1992-93 season.1 Yet, postseason elimination aside, on this night, there was another kind of strangeness: this was the night of Derek Jeter—the Captain’s—last game in the home pinstripes at Yankee Stadium.

For 20 years Jeter has donned those coveted pinstripes. Coming into the game on this particular Thursday, Jeter had only played one game (2008)2 out of 2,7453 career games that did not matter, games in which the Yankees had been eliminated from playoff contention. Now, at the conclusion of Sunday’s game in Boston, that number was a whopping five games out of 2,748.

The strangeness of Thursday’s home finale quickly wore off as the Yankees took the field. Starting on the bump for the Yankees on this night was Hiroki Kuroda, an 11 game winner, who also would be pitching his last game in the Major Leagues. After this start, the 40-year-old pitcher would sign a free agent contract with his original professional team, the Hiroshima Toyo Carp, in Japan. Things did not get off to a great start as Kuroda gave up back-to-back home runs to the lead-off hitters Nick Markakis and Alejandro De Aza4 in the opening inning; then retired the next three in order. The Yanks responded in the bottom half of the frame when starting pitcher Kevin Gausman gave up a single by Brett Gardner, and then a double to the Captain, scoring Gardner. Jeter eventually came around to score the tying run on a wild pitch by Gausman and a throwing error by second baseman Kelly Johnson.

The next five and half innings were scoreless until the bottom of the seventh when the Yankees scored three unearned runs, off of relief pitchers Ryan Webb and Brian Matusz, to take a 5-2 lead. The top of the ninth saw David Robertson come in and give up two home runs—to Adam Jones and Steve Pearce—scoring three runs, which inevitably handed Kuroda, who had pitched an eight-inning gem, the no decision and blew the lead and his save opportunity. This drama helped set the stage for the Captain and the bottom of the ninth, when he was due up third.

The bottom of the ninth started with a Jose Pirela single and subsequent pinch runner in the form of Antoan Richardson. After a sacrifice bunt by Gardner, the New York faithful heard a familiar comforting sound. It is an introduction they have heard throughout the Captain’s career at Yankee Stadium, made by the late Bob Sheppard (1910-2010), “Now batting for the New York Yankees, number 2, Derek Jeter, number 2.”

Before Sheppard’s passing, Jeter requested a recording be made because in the words of Jeter, “That’s the only voice I’d heard growing up, and that’s the only voice I wanted to hear when I was announced at home…and fortunately he agreed to do it.”5 This would be the last time the Yankee faithful would see number 2 dig into the right-handed batters box, tip his hat to the opposing pitcher, and take his at bat. It would also be the last time they heard Bob Sheppard’s voice over their public address system.

Jeter took his time stepping to the plate, undoubtedly aware of the script that had been placed before him. He dug in, adjusted his elbow pad, fiddled with his batting gloves and then took his stance. Amid the deafening chant of “Der-ek Jet-er” from the 48,613 fans that could not have asked for a better ending to a story, Evan Meek delivered one pitch. A cut fastball, that started on the inside portion of the plate and slid ever so slightly back across the middle. In typical Derek Jeter fashion, he took the pitch given to him, and slapped the ball between the fielders on the right side of the infield, into right field. When Richardson slid head first across home plate, Derek Jeter had delivered one last time. Yankees win 6-5.

After giving up the game-winning hit to Jeter, Evan Meek’s record dropped to 0-4. He commented to reporters afterward sharing what it was like to be in that moment with Jeter.

“[W]hen he stepped up, it was just, ‘Ok, let’s go, let’s do this.’ Threw him a cutter away. What better way to go out here at Yankee Stadium, than to do what he did…I can’t be upset about it. It was a great day for him. Great day for Yankees fans, great day for baseball. Obviously, you don’t want to be the guy out there that gives up the game, but you kind of feel like today was – it wasn’t about me, it wasn’t about anyone else. It was his day.”6

Others on the Orioles did not share in Meek’s sentiment. Manager Buck Showalter and Adam Jones both displayed obvious dismay at the fact that they had lost a game they “needed to win”7, in Jones’ words. However, tonight the Orioles would drop a game and their record to 95-64, with three games left to play in the season; these three games were pivotal to the Orioles securing the best record in the American League and home-field advantage throughout the playoffs. They would go on to finish 96-66, hosting the Detroit Tigers in the Divisional Series, and then eventually losing to the American League Champion Royals, falling short of the World Series.

After rounding first base, having delivered the game for the Yankees, Jeter leapt with joy, and was mobbed by his teammates. The final steps of the night would be a victory lap around Yankee Stadium for a game well played and a career well produced.

The greatest sign of Jeter’s legacy could be seen Thursday night as he was saying goodbye to the Yankee faithful. As Jeter walked around the infield for the last time, and then came to the batter warm up area for his well-deserved post-game interview, the camera panned to his young nephew in a Re2pect hat—Jeter’s “slogan” given to him by Nike. As the camera focused on the young boy, he tipped his cap, much like his uncle did in the batter’s box, as to say, “well done Uncle, well done.”