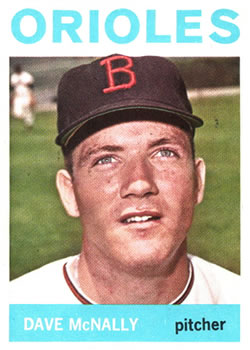 When Dave McNally started the 1962 season with Class-A Elmira, he never expected to be pitching in Baltimore’s Memorial Stadium at the end of the season. His major-league debut against Kansas City on September 26 resulted in a sterling performance that impressed the Orioles enough to earn him a permanent major-league job for the next season. The left-hander’s two-hit shutout was a big factor in the game, which was played in 1 hour and 32 minutes, the quickest game in Orioles history.1

McNally was only two seasons removed from pitching in American Legion baseball, when he had an 18-1 record and his team finished second in the 1960 national championship finals to the New Orleans-based team that featured Rusty Staub. McNally’s high school, Billings (Montana) Central Catholic, did not field a baseball team.2

Not yet 18 years old, McNally signed with the Orioles for an $80,000 bonus in September 1960. He was a promising amateur player who had a rude awakening in professional baseball. The Orioles overestimated his readiness when they started him off at the Double-A level in 1961; after only four starts, he was quickly demoted and spent the rest of the season in Class B, where he finished with a combined record of 8-13, 4.42 ERA, and 1.604 WHIP.

Baseball Digest had the following scouting report on McNally going into spring training in 1962: “Displays good speed and balance. Curve ball fair, but should get better with control.”3 He was much improved at Class-A Elmira: He threw 13 complete games and finished with a 3.08 ERA while averaging a strikeout per inning. But his control was still an issue, since he also led the Eastern League in walks and wild pitches.4

McNally was one of a number of Orioles prospects, including Pete Ward, Bob Saverine, John Miller, and Andy Etchebarren, who were brought up for a look in September 1962. Orioles manager Billy Hitchcock, thinking forward to his roster for the next season, decided to give them all a chance to play. The Orioles were in seventh place and had nothing to lose in giving McNally a start in late September. The Orioles had recent history of taking a chance on young pitchers. Previous upstarts Steve Barber, Milt Pappas, Jack Fisher, and Chuck Estrada were now manning the starting rotation anchored by 35-year-old Robin Roberts.5

With both teams finishing in the lower half of the American League, it was understandable that only 2,840 fans attended the game at Memorial Stadium. They sat through a constant drizzling rain in the first game of a twilight-night doubleheader in the last homestand of the season and were rewarded with one of the best Orioles pitching performances of the season.6

Bill Fischer, a 31-year-old right-hander, got the starting assignment for the A’s. His major-league career had been spotted since his rookie season in 1956. His last six decisions were losses, although he had not issued a walk in his previous 11 appearances. Fischer would later become a scout, pitching coach, pitching coordinator, and special adviser spanning 50 years.

Etchebarren, 19 years old, was McNally’s batterymate. He was already familiar with McNally; he had been the lefty’s catcher at Elmira. Etchebarren, a prized $85,000 bonus signee, was making his major-league debut as well.

The Orioles got on the scoreboard first in the bottom of the second inning. Jim Gentile led off with a single and went to third on Ward’s double. After Boog Powell popped out to the catcher, Saverine’s groundout to second scored Gentile. Etchebarren singled in his first major-league at-bat to score Ward.

McNally gave up his first hit in the top of the third when Bobby Del Greco doubled, and he yielded a single the next inning to Ed Charles. These were the A’s only two hits, as McNally retired the next 17 batters after Charles.

Fischer gave up only six hits in seven innings before being lifted for John Wyatt in the top of the eighth. Jerry Adair added the Orioles’ final run on his 10th home run of the season. The final score was 3-0.

Baltimore’s hitting was led by Adair’s and Brooks Robinson’s two hits apiece, out of a total of eight for the team.

Fischer extended his streak of consecutive innings without issuing a walk to 79, which was the most in major-league history.7 However, he took his 11th loss of the season. Each team sent only 31 batters to the plate, contributing to the relatively quick game.

In the second game of the doubleheader, the Athletics rebounded, winning 6-2, with Orlando Pena pitching a complete game.

McNally credited Orioles pitching coach Harry Brecheen with helping him get through some early struggles with his control. He said, “My curve and my slider were breaking low during the first five innings and Harry noticed I was dropping my arm too much to the side.”8

Earl Weaver, who had managed McNally and Etchebarren at Elmira, was in Baltimore for Orioles organizational meetings when the two prospects made their major-league debuts. He said, “I thought (McNally) pitched a real smart game. Not like a lot of rookies who just try to blow the ball past batters.” He added, “One thing I’ve always thought was in his favor – when he didn’t have his real good fastball, he could get his breaking stuff over.” Regarding Etchebarren’s debut, Weaver said, “I thought Etchebarren did a good job catching him, too. He didn’t drop a ball all night. Got a big hit, too. Remember, this is a kid who played just 19 games of professional baseball before this season.”9

Weaver felt both players needed more minor-league seasoning in 1963, but didn’t rule out that both could make contributions to the big-league club.10

Brecheen was also impressed by McNally’s performance and believed he could earn a shot with Baltimore the next season. He said, “When a 19-year-old wins 15 games in his second year as a pro and then shuts out a team that hits the ball hard like Kansas City, you’ve got to like his chances. He’s got all the pitches. All he needs is work.”11

Despite having an established rotation from the previous year, McNally did wind up getting his shot with the Orioles in 1963. But he experienced growing pains and struggled at times during his 20 starts. He finished with a 7-8 record and a 4.58 ERA. By 1965 he got a better handle on his control, posting his best record to date, 11-6 with a 2.85 ERA. He was a big part of the Orioles capturing their first-ever World Series in 1966. He led the team in innings pitched, compiling a 13-6 record and 3.17 ERA.

McNally later won 20 or more games in four consecutive seasons, helping the Orioles become one of the better teams in the American League. He was runner-up for the Cy Young Award in 1970 when the Orioles won their second World Series in five seasons. He finished fourth in the voting in two other seasons.

McNally was reunited with Weaver when his former minor-league skipper replaced Orioles manager Hank Bauer in midseason 1968. Etchebarren proceeded to a 12-year career with the Orioles. Weaver turned out to be the most successful manager in Orioles history and was elected to the National Baseball Hall of Fame in 1996.

In addition to his on-the-field success, McNally is remembered along with Andy Messersmith for winning the battle against the major leagues’ reserve clause, thus creating the free-agency era beginning with the 1976 season. McNally never realized the fruits of victory: He wound up retiring after the 1975 season. Messersmith signed a five-year, $1.5 million contract with the Atlanta Braves.12

McNally was elected to the Baltimore Orioles Hall of Fame in 1978.