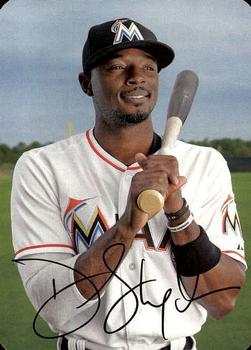 September 26 should have been his 30th start.

Instead, his coaches, teammates, and 26,9331 fans were mourning the untimely passing of José Fernández2 the previous day in a boating accident. Instead of the atmosphere of relaxed anticipation before a ballgame, the mood was somber inside and outside Marlins Park.3

As the Marlins left the dugout, it was quickly apparent that this would be no ordinary night: All the Marlins’ jerseys read “Fernández 16” in memory of their fallen teammate.4 The starting players stood by the mound, where a “16” had been painted on the side. Many of the Marlins players and coaches had tears in their eyes as a video tribute was played on the screen, followed by a moment of silence. A lone trumpeter played “Take Me Out to the Ball Game” in dirge time before the National Anthem. Spontaneously, the Mets broke from their line and crossed over to hug the Marlins — and there were a few moist eyes among the Mets as well.

Once the hugs had concluded, the Marlins surrounded the mound, etching “16” in the dirt with their fingers or rubbing a handful of mound dirt on their pants. (Growing up in Cuba without a rosin bag, Fernández never used one: Instead, he’d grab a handful of dirt and wipe it on his pants.) The Marlins finished with a group hug and a few words from Giancarlo Stanton, then headed back to the dugout or field to begin the game. The players had written “JF #16” in white on their black caps. Fellow Cuban5 Yoenis Céspedes had brought the Mets’ Fernandez memorial jersey and taped it up in the Mets dugout.6 Instead of the usual between-inning entertainment, Fernández video clips (including his US citizenship ceremony) and his favorite music were played.

Still, there was a game to be played. The game was between the second-place (Mets, 83-73) and third-place (Marlins, 77-78) teams in the NL East, 8½ and 14 games behind the division champion Nationals. The Marlins were unlikely to make the postseason, but the Mets were in line for a wild-card berth so the game mattered to them.7

Marlins pitcher Adam Conley (8-6, 3.94 ERA) was returning after a stint on the disabled list. Fernandez’s start had been moved from September 25 to September 26 to accommodate Conley’s return, with Conley scheduled to start on the 25th.8 That game was canceled after Fernandez’s death, so Conley took the mound on the 26th. Emotions notwithstanding, he allowed only a single to Asdrúbal Cabrera in the top of the first.

All-Star Bartolo Colón (14-7, 3.12 ERA), the oldest active player in the majors at 43, took the mound for the Mets in his 499th career start. The Marlins’ Dee Gordon stepped in as a right-hander for the first pitch in memory of Fernández, a right-handed .250 hitter in 2016. Gordon switched back to his usual left-handed batting helmet and stance for the next pitch, hitting it into the second deck for his first home run of the year.9 After rounding the bases, he arrived at home plate in tears. There were hugs instead of high fives in the dugout. Colón then set the Marlins down in order.

Conley worked a one-two-three top of the second on only eight pitches with some help from Stanton’s leaping catch of Jay Bruce’s liner.

As Colón took the mound for his second inning, the Mets TV announcers opined that he “doesn’t have any zip on the ball tonight, he just doesn’t have it.” Their concerns were justified: Stanton led off with a base hit up the middle, and Justin Bour doubled off the wall in front of the Home Run Sculpture.10 J.T. Realmuto beat out an infield hit, scoring Stanton. Adeiny Hechavarría followed with a ground-rule double, scoring Bour. The umpires sent Realmuto back to third. He wasn’t there long: Conley executed a safety squeeze. All that scoring seemed to break the somber mood: Now there were the typical high-fives in the dugout. Gordon’s seeing-eye single scored Hechavarría, as Gabriel Ynoa started warming in the Mets’ bullpen. But Colón got the next two outs: Marcell Ozuna on a long fly down the first-base line, and Martín Prado on a liner to Cabrera. The inning ended with the Marlins leading 5-0.

Conley got the first two outs of the third quickly: Eric Campbell was retired on a comebacker, Colón was out flailing at three pitches. José Reyes made it to second on an infield single plus an airmailed throw by Conley. Cabrera walked but Céspedes struck out, leaving two on base.

Christian Yelich started the bottom of the third with an infield hit between Colón’s legs. The ball stopped on the grass behind the mound with Yelich safely on first. Curtis Granderson made a diving catch of Stanton’s liner to center. Bour hit his first career triple (in his 253rd game) when the ball bounced under right fielder Bruce’s glove. The triple scored Yelich and ended Colón’s night, raising his ERA to 3.42. Ynoa took the mound to face Realmuto, who grounded to Cabrera. Hechavarría blooped one into center, scoring Bour. Destin Hood struck out swinging, but the Marlins’ lead was now 7-0. This was the first time this year Colón had allowed seven runs in a game.

With Conley having reached his pitch limit after three innings, Mike Dunn took over for the Marlins. Two strikeouts and a groundout and he was back in the dugout on 10 pitches.

Gordon and Ozuna opened the home half of the fourth with back-to-back singles off Ynoa. That was a promising start; but a lineout, a strikeout, and a fly out ended the inning with the score unchanged.

The Mets got on the board in the top of the fifth. Usually dependable relief pitcher Brian Ellington (1.52 ERA over 29⅔ innings) started by striking out Travis d’Arnaud. But he walked pinch-hitter Lucas Duda (who had only two hits in the four games since his return from the DL). The next pinch-hitter, Brandon Nimmo, hit the first pitch into center. After Reyes flied out, Cabrera doubled into the right-field corner, just inches fair, scoring two. Céspedes hit a roof-level popup for the third out.

The next Mets reliever, Rafael Montero, gave up Bour’s third hit of the night. But the Marlins never got a runner into scoring position: Two force outs at second and a fly out to the warning track ended the inning.

Rookie Austin Brice was the next pitcher up for the Marlins, but manager Don Mattingly pulled him after back-to-back walks. Next up in the reliever parade, Hunter Cervenka got one out but walked d’Arnaud to load the bases. Duda, who had stayed in to play first, looked at strike three. Dustin McGowan, the third pitcher of the inning, got a groundball for a force play at second to end the frame.

Gordon collected his fourth hit of the night off Eric Goeddel in the bottom of the sixth. While Yelich was batting with two out, Gordon stole his 27th base of the year. With the count 3-and-1 on Yelich, the Mets walked him to pitch to Stanton. The strategy worked: Stanton looked at a curve that dropped in for strike three.

Nothing of note happened in the top of the seventh except that the Marlins finally got Cabrera out, looking at strike three. In the bottom Ichiro Suzuki singled for hit number 3,029 but was left on first when Gordon flied out.

In the eighth Kyle Barraclough allowed the fifth Mets hit, to Granderson. Bruce’s one-out base hit advanced Granderson to third. After pinch-hitter Michael Conforto struck out, Duda’s single to left scored Granderson: 7-3, Marlins, which was the final score. Pinch-hitter Alejandro de Aza looked at strike three to end the frame. Jim Henderson worked a one-two-three bottom of the eighth.

Marlins closer A.J. Ramos had little trouble with the top of the ninth. All he allowed was a walk to Cabrera.

The Marlins took the field, but instead of the usual postgame high-fives there were hugs and tears. Stanton reversed his jersey so the “Fernandez 16” was forward. Gordon took off his jersey to show an “RIP” T-shirt, with a silhouette of Fernandez for the “I.” The game ball was left on mound. With some Mets players watching from their dugout, the full complement of Marlins players and coaches came from the dugout and bullpen, making a circle around the mound, linking arms. Stanton spoke, then there was a moment of silence. The team knelt and left their caps near the pitching rubber, then slowly filed off into their dugout to the respectful applause of the crowd. As he entered the dugout, the camera caught Dee Gordon: He had a small #16 shaved into his hair.

In the background, the neon of the Home Run Sculpture flashed and glowed as it did after every Marlins win.

The author consulted Baseball-Reference.com and Retrosheet.org, and viewed the Mets’ and Marlins’ broadcasts on YouTube.

4 Team owner Jeffrey Loria indicated that the number would be retired after this game.

5 Fernández unsuccessfully attempted to defect three times: Each failed defection attempt was followed by a prison term. On his fourth attempt, in 2007, he successfully defected with his mother and sister, but his mother fell overboard and he dove into the water to save her. They reached Mexico, then moved to Tampa, where his stepfather had settled. foxsports.com/florida/story/jose-fernandez-set-to-make-mlb-debut-sunday-040513. The newscasters mentioned the irony of the sea bringing him out of Cuba and taking him away.

6 All major-league teams had created a “Fernandez 16” jersey of their own to display in their dugout during their September 25 games. Céspedes brought the Mets version with him to Miami for this series.

7 They finished at 87-75, matching the Giants. They lost the wild-card game to the Giants, who then lost the NLDS to the Cubs.

9 This was his ninth home run in his six-year major-league career.