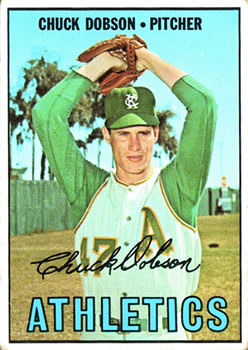 On the night of Wednesday, September 27, 1967, the Kansas City Athletics played their last two home games. The Athletics were leaving Kansas City, their home for 13 years after being moved from Philadelphia. The club’s owner, Charles O. Finley, had received permission from his fellow American League owners to move the team to Oakland. This would be the next to last game they would play in Kansas City.

The Athletics and the Chicago White Sox were playing a doubleheader at Municipal Stadium because their scheduled game the night before was rained out. The A’s (60-95) were dead last in the 10-team American League, but the White Sox entered the night just a half-game behind the first-place Minnesota Twins, who had lost earlier in the day to the California Angels. The other two teams in the race, the Red Sox and the Tigers had not gained any ground on the Twins that day, with the Red Sox losing to the Indians and the Tigers idle. As it turned out, the Athletics would play a key role in the outcome of the pennant race.

The White Sox sent Gary Peters (16-9) to the mound while the Athletics countered with Chuck Dobson (9-10). Dobson had some extra incentive in his resolve to defeat the White Sox in the person of their manager, Eddie Stanky. Dobson put it this way: “We were playing a game in Chicago early in June. I had to cover first base on a play and Stanky came on the field and called me a donkey.” “I’ve never forgotten it and I made up my mind that I would try to beat the White Sox every time I got a chance.”1

The game started at 5 P.M. with only 5,325 fans in attendance. The temperature was in the mid-50s and the lights were on. The Athletics scored first. Mike Hershberger led off the second inning with a double over third base. The White Sox’ Pete Ward, who chased down the ball in left field, aggravated a recent rib injury2 and was forced to leave the game. Ken Berry replaced Ward in left field. Hershberger, a former White Sox outfielder, stole third base and scored on Jim Gosger’s line single to right field.

After that, both pitchers settled in and neither team scored until the bottom of the sixth, when some shoddy fielding by the White Sox gave the Athletics two runs. John Donaldson led off and reached first on a fielding error by third baseman Ken Boyer. Peters fielded Joe Rudi’s bunt and threw to second. Umpire Bill Valentine initially called Donaldson safe when shortstop Ron Hansen dropped the throw from Peters, but he reversed his call after deciding that Hansen had maintained procession of the ball long enough for the first out. With Hershberger batting, Rudi went to second on White Sox catcher J.C. Martin’s passed ball. Hershberger struck out but Rick Monday, on a 2-and-2 count, singled just past the reach of second baseman Don Buford and Rudi scored, giving the Athletics a 2-0 lead. Peters, who had given up only four hits and struck out 10, was removed by Stanky and replaced by Don McMahon. McMahon walked Sal Bando; ball four was a wild pitch and Monday went to third base. Stanky brought in left-hander Wilbur Wood to face left-handed batter Gosger. Gosger laid down a squeeze bunt. Wood picked up the ball and had time to catch Monday at the plate, but threw to first instead. The throw was wild; Monday scored, Bando reached third, and Gosger went to second. Knuckleballer Wood struck out the next hitter, Dave Duncan, to get out of the inning, which ended with the Athletics leading 3-0.

In the White Sox eighth, Wood was lifted for pinch-hitter Duane Josephson, and pitcher Hoyt Wilhelm replaced him in the bottom of the inning. Rudi, leading off, got a double on a ball that landed in right-center field within reach of three White Sox. On Hershberger’s bunt, Rudi was thrown out at third by catcher Duane Josephson. Monday walked, putting runners on first and second for Sal Bando, whose single to left field drove in Hershberger. Then Gosger singled to center, scoring Monday. When Wilhelm got behind in the count, 2-and-0, on Duncan, he was replaced by Roger Nelson. Nelson completed the walk to Duncan, loading the bases again. The Athletics tried a suicide squeeze but Dobson missed the pitch and Bando was tagged out at the plate. Nelson then hit Dobson with a pitch, again loading the bases. Nelson got out of the inning when Ted Kubiak grounded out, first baseman Tommy McCraw to the pitcher. The A’s led, 5-0.

The White Sox offense came alive in the top of the ninth inning. Tommy Agee tripled off the right-center-field wall. Don Buford flied out to right field but not deep enough for Agee to tag up and try to score. Dobson then walked McCraw and Athletics manager Luke Appling pulled him in favor of Lew Krausse, who had control problems. He threw a wild pitch, allowing McCraw to go to second base, then walked Boyer to load the bases and walked pinch-hitter Smoky Burgess on four pitches, forcing in a run. Rocky Colavito’s single to left field scored McCraw. Manager Appling then called for Paul Lindblad to put out the fire, and he did. He got pinch-hitter Wayne Causey to fly out to Monday in center field and Ron Hansen on a grounder to third baseman Bando for the final out.

The hitting star for the Athletics was Jim Gosger, who had three hits and three RBIs. Commenting on his sixth-inning bunt that scored Monday, he got the inning wrong, but noted, “I was on my own on the bunt in the eighth. … I motioned to Monday that I was going to bunt and Rick was close to the plate when I did.”3

The other standout performer for the Athletics was starting pitcher Chuck Dobson, who allowed only two singles, one walk, and no runs through 8 1/3 innings. He said, “I wanted to get a shutout, but I got those ninth-inning jitters again. “I started to think about a shutout and that got me into trouble. I got tense. I still figured that I could go the distance, but everything turned out all right.”4

The loss put the White Sox a game behind the first-place Twins. The Athletics, even with the win, remained in last place. The White Sox after the loss had to feel they were losing some of the momentum they had before the game. The Sporting News commented, “An hour before this twin bill, the Sox’ chances never looked better and there was much confidence as the club sent Peters against Chuck Dobson in the first game of this twin-bill.”5