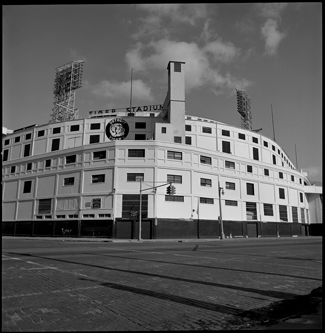 “Tonight we must say goodbye. So long old friend. We will miss you.”1 With his voice breaking, legendary radio announcer Ernie Harwell uttered those somber words to mark the end of a storied era on Monday, September 27, 1999, as the Detroit Tigers played their final game at Tiger Stadium, the venerable 87-year-old ballpark at the intersection of Michigan and Trumbull Avenues. In an emotionally charged atmosphere, the Tigers defeated the Kansas City Royals, 8-2, to conclude a day filled with nostalgic celebrations.2

“The Tiger Stadium experience is about so much more than winning and losing,” said Hall of Famer Al Kaline. “It is a bond that all people of Detroit share.”3 “Mr. Tiger” knew his history. For the previous 103 years the Tigers had played ball on “The Corner” in the Corktown neighborhood of the Motor City, first as a member of the Western League and then as a charter member of the American League, beginning in 1901. On April 20, 1912, Navin Field, a concrete and steel structure that seated about 23,000, opened its doors, replacing 15-year-old Bennett Park, an outdated wooden-framed park. Expanded to 53,000 and renamed Briggs Stadium in 1938 and later Tiger Stadium in 1961, the ballpark witnessed the rise of Detroit as one of the wealthiest cities in the US and also its decline. It was the home of six pennant winners, four World Series champions, and countless heroes.

Fans began arriving at the stadium before noon hoping to catch a glimpse of a private reception in Tiger Plaza for former players from the last seven decades. “This was the best place ever to play baseball,” said Darrell Evans, member of the 1984 champions. “The people were right on top of you.”4 Perhaps he was thinking of the right-field “porch,” which hung over the field and robbed many outfielders of easy fly balls.

George Kell, a five-time All-Star with the Tigers in the late 1940s and early 1950s, took a less nostalgic approach. “I do love this old ballpark,” he said. “But there’s just not enough revenue to compete with the Yankees, Atlanta, Texas, and Baltimore. You’ve got to have box seats, luxury boxes, and a bigger concourse to get the people in and out, the parking.”5 As early as the 1940s, explained Bill McGraw of the Detroit Free Press, the city had planned the demise of Tiger Stadium in a failed bid to land the Olympics.6 In the 1970s taxpayers opposed the sale of bonds to finance a new stadium that led to the city taking it over in 1977. “It’s obvious the damn thing is falling down,” said then Mayor Coleman Young.7 Even after millions of dollars in renovations, it was clear by the early 1990s that a new stadium was necessary.

The official pregame ceremony began about 3:15 P.M. when Harwell introduced team owner Mike Ilitch, Detroit Mayor Dennis Archer, Michigan Governor Joe Engler, and Baseball Commissioner Bud Selig. Each received a hefty round of boos as they addressed the fans from a microphone behind home plate. The mood changed when the 64-year-old Kaline, described by Harwell as embodying “the spirit of the Tigers,” took center stage.8 “[Tiger Stadium] looked like an impressive battleship, a fortress at Michigan and Trumbull,” said Kaline, recalling his impression upon seeing the stadium as an 18-year-old rookie in 1953. “[It had a] peacefulness that seemed almost magical. I again find myself humbled and somewhat overwhelmed by the events unfolding in front of us. There is just too much history to put into words. Tiger Stadium’s strength lies not in dazzling architecture or creature comforts, but rather in character, charm, and history.”9

On a sunny, 84-degree autumnal day, the overflowing crowed of 43,356 was treated to a few more surprises. Billy Rogell, the 94-year-old former infielder for the Tigers (1930-1939), threw out the ceremonial first pitch. Minutes before the start of the game, Kaline and Hall of Famer, George Brett, both dressed in baseball uniforms as honorary captains of their respective teams, took the lineup cards to home plate.

As Detroit’s starting nine took the field in their famous home white uniforms, spectators noticed something different. Not only were there no names on the jerseys, the starters wore the numbers of the all-time Tiger team selected by fans. Right fielder Karim Garcia (a .240 hitter in 1999) donned Kaline’s number 6; slugging first sacker Tony Clark (31 homers) wore Hank Greenberg's number 5; while center fielder Gabe Kapler wore a uniform without a number in a tribute to Ty Cobb, who played during an era when numbers were not used.

Wasting no time getting on the board, the Tigers’ leadoff hitter, Luis Polonia, launched Jeff Suppan’s 1-and-2 pitch, according to John Lowe of the Detroit Free Press, “an estimated 435 feet into the far section of the lower deck in right center” for the game’s first run.10

Moehler yielded a leadoff homer to rookie Mike Quinn in the second inning. The Tigers took a 2-1 lead in the bottom of the frame when designated hitter Robert Fick hit a deep sacrifice fly to the right-field power alley to drive in second baseman Damion Easley, who had led off the frame with a double and taken third on a groundout.

In the third Moehler surrendered three singles and a walk, but only one run on Joe Randa’s infield hit to drive in rookie Carlos Beltran and tie the game, 2-2. “Moehler had nothing” early in the game, said Parrish, but the righty settled down to yield just two hits in the next three innings before giving way to the first of three relievers.11

The game remained tied, 2-2, until the bottom of the sixth inning. Third baseman Dean Palmer, who had departed Kansas City via free agency in the previous offseason, led off with a single. Two batters later, Garcia launched a go-ahead two-run homer off Suppan.

The highlight of the game occurred in the eighth inning. Kansas City reliever Jeff Montgomery loaded the bases on a double to Palmer, single to Easley, and an intentional walk to Garcia. After Palmer was forced at home on Kapler’s grounder to the mound, Parrish intended Frank Catalanotto to pinch-hit for Fick, suffering through a miserable season following shoulder surgery in March. But the 25-year-old rookie persuaded his skipper to let him bat and the result was memorable. Fick blasted a towering grand slam, the last homer (indeed, the final hit) in the history of Tiger Stadium, for a convincing 8-2 lead. According to Gene Guidi of the Detroit Free Press, the clout hit “the roof above the third deck in right field before bouncing back on the field.”12 “This is definitely the most exciting thing that’s ever happened to me,” said Fick after the game.13

After Fick’s round-tripper, the partisan crowd remained standing and screaming for the rest of the game. The noise reached a crescendo when closer Todd Jones registered two quick outs in the ninth. With cameras flashing on every pitch, Jones delivered the fateful last pitch in Tiger Stadium to Beltran on a 2-and-2 count. “Here’s a swing, and a MISS – The GAME’S OVER!” exclaimed Harwell in his soothing Southern accent. “And Tiger Stadium is no more. The final score, the Tigers 8, and the Royals 2.”14 Jones fooled Beltran with a curveball in the dirt; catcher Brad Ausmus scooped up the ball and tagged Beltran for the final out. “I guess the flashes got him,” said Jones exuberantly after the game.15 Matching their season high with their third consecutive victory, the Tigers moved to 65-91; the Royals fell to 62-95. Moehler picked up his 10th victory to reach double figures for the third of four consecutive seasons while Suppan fell to 10-11.

The game ended shortly after 7:00 and almost immediately, reported Nicholas J. Cotsonika of the Detroit Free Press, the grounds crew dug up home plate which was transported that night to the Tigers’ new stadium, Comerica Park, located about a mile away. The smiles and laughter of victory soon gave way to the tears and quivering lips of the final ceremony emceed by Harwell. With “feeling of a wake” and music from the film Field of Dreams in the background, Harwell read a short history of baseball played at the intersection of Michigan and Trumbull and then introduced a short film.16 Suddenly, the center-field door opened and one by one, 65 former players from the 1930s to the 1990s strode in and went to their former position. According to sportswriter Mitch Albom, the “crowd fell into a church-like reverence.”17 “It was like watching a rewind film,” wrote Albom. The first to appear was Mark “The Bird” Fidrych; he was followed by the great and not-so-great, from Kaline, Kirk Gibson, Alan Trammell, Lou Whitaker (the latter two, befitting history, came out together), and Cecil Fielder to Dick McAuliffe and Dave Bergman. The oldest was Elden Auker, who pitched for Detroit from 1933 to 1938. The crowd was in no mood to be disturbed. “Every mention of the new ballyard,” reported David A. Markiewicz, “drew a round of boos.”18

But all games, and even nostalgic ceremonies, have an end. The scoreboard was turned off at 8:19 and the stands were empty by 9:00. After 6,873 regular-season games, 35 postseason contests, and three All-Star Games, Tiger Stadium was, in Ernie Harwell’s words, “no more.”

2 The entire game, including portions of the pregame and postgame ceremonies, is available via Classic MLB on YouTube at http://youtube.com/watch?v=QwjZG249iN0.

9 Cotsonika, “Final Visit Much Like The first For No. 6.”