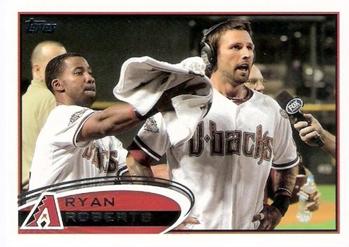 Baseball comebacks are even more remarkable and unique when compared to other sports. In timed sports, there is always a moment when the game is over, even if it “ain’t over.” In baseball, a team can be down five runs in the final inning, have no one on base, two outs, and two strikes on the batter, and still come back to win.

It was the next to last day of the season in Phoenix,1 and while the Diamondbacks had already clinched the NL West Division championship, they were still alive for home-field advantage.2 There were postseason scenarios aplenty, with the Diamondbacks either going to Philadelphia or Milwaukee, or opening at home against Atlanta or Milwaukee.3 The buildup to the game was mostly concerned with a September call-up, Jarrod Parker, the ninth pick in the 2008 draft, who was making his major-league debut, getting the start for the Diamondbacks after helping the Mobile Bay Bears win the Southern League championship.4 Parker looked like a success story, as he had come back from Tommy John surgery a “more complete pitcher,” and was looking forward to a successful career with the Diamondbacks.5 Yet this would be his only appearance for the team that drafted him.6

Parker kept two balls from the game: his first strikeout (of Jerry Sands in the first inning) and his first hit (a fifth-inning double off Hiroki Kuroda).7 It was a successful debut, as Parker worked 5⅔ innings of scoreless ball. While the Diamondbacks could not have expected anything better from their prospect, the game is remembered not for Parker’s debut, but for what happened after he was out of the game.

Both starters worked perfect innings in the first and the second. Jamey Carroll lined a single to left in the third, but was stranded at second as Dee Gordon flied out. The Diamondbacks got their first baserunner in the third as well, when Geoff Blum led off with a single, but despite a Willie Bloomquist single later in the inning, the Diamondbacks failed to score.

Parker and Kuroda continued to match zeroes through five innings, with Kuroda helped somewhat by Parker. After Parker’s fifth-inning double, Bloomquist hit a fly ball to right field. Parker ran when the ball was hit and failed to make it back to second base in time, ending the inning.

Parker ran into trouble of a different sort in the sixth. Gordon led off the inning with a bunt single and was sacrificed to second by Sands. Matt Kemp advanced Gordon to third on a long fly out to right, and Parker walked Juan Rivera. Diamondbacks manager Kirk Gibson hobbled8 to the mound to relieve Parker, and Joe Paterson retired James Loney on a groundout to shortstop to end the threat. Kuroda worked a perfect sixth.

Kuroda was pulled in the seventh for pinch-hitter Tony Gwynn Jr., who grounded out, but Gordon followed with a single to score Eugenio Velez. Gordon was thrown out advancing to second, ending the inning. The Diamondbacks responded instantly off relief pitcher Matt Guerrier, who walked Chris Young and gave up a double to Lyle Overbay, tying the game, 1-1. Scott Elbert replaced Guerrier and walked pinch-hitter Aaron Hill. Mike MacDougal replaced Elbert and Collin Cowgill ran for Overbay, with Ryan Roberts stepping to the plate and being asked to sacrifice the runners along ahead of rookie first baseman Paul Goldschmidt, who was on deck to hit for the pitcher. With a chance to blow the game open, Roberts and Goldschmidt both failed. Roberts failed to sacrifice, instead reaching on a fielder’s choice with Cowgill out at third. Goldschmidt followed by grounding into a 5-4-3 double play, ending the inning and preserving the 1-1 tie.

In the ninth, the Diamondbacks’ J.J. Putz gave up two-out singles to A.J. Ellis and Jamey Carroll, but got out of the inning by striking out pinch-hitter Trent Oeltjen. Josh Lindblom came in to pitch the bottom of the ninth for the Dodgers, and despite a leadoff single by pinch-hitter Sean Burroughs, the Diamondbacks managed nothing. So it was on to extra innings, and a game that had so far been fairly uneventful (unless you were Jarrod Parker) was about to provide baseball fans with perhaps the most eventful 10th inning in baseball history.9

Micah Owings took the mound in the 10th, and Gordon led off with his third hit of the game, a double to right field. Sands bunted and Owings fielded and attempted to throw Gordon out at third. He threw the ball away, allowing Gordon to score while Sands wound up at second. Kemp singled to center, scoring Sands, and advanced to second on the second error of the inning, this one by center fielder Chris Young. After Juan Rivera grounded out, James Loney singled in the third Dodgers run of the inning, making the score 4-1. Aaron Miles drew a walk, bringing A.J. Ellis to the plate.

Ellis hit a fly ball down the right-field line that hit the fence at a strange angle, struck Arizona right fielder Justin Upton on the side of the face, and bounced away.10 By the time the ball was retrieved, the Dodgers catcher had a triple, and the lead had grown to 6-1. Upton was removed from the game as a precaution because he had been hit in the head for the second time in three days.11 He was replaced in the field by Cole Gillespie. Jamey Carroll hit a line drive to Hill at second, and Owings struck out Justin Sellers to end the top of the 10th.

In the bottom of the inning, Blake Hawksworth took the mound for the Dodgers, making what would be his final major-league appearance. Willie Bloomquist worked the count full before grounding out to shortstop. Parra grounded back to the mound for the second out. That brought Gillespie to the plate, instead of Upton, who led the Diamondbacks in on-base percentage. Gillespie was making just his fifth plate appearance of the season, and had gone 0-for-3 and drawn a walk in his previous four.

With the count even at 2-and-2, Gillespie hit a chopper to Loney at first base that should have been the third out of the inning. However, Hawksworth did not cover first base, instead jogging slowly in the general direction of first base and only breaking into a run when it was too late to beat Gillespie to the bag.12 Gillespie reached with his first hit of the 2011 season.13 Miguel Montero quickly went down two strikes before he hit a groundball just to the right of second base and into center field, with Gillespie advancing to third. Chris Young walked on four pitches to load the bases.

John McDonald pinch hit for Owings, despite the pitcher being the better hitter of the two.14 For the third time in the inning, Hawksworth got two strikes on the batter, then McDonald hit the ball hard, but straight at the third baseman Miles, who misplayed it. The ball bounced to Gordon at short, but his throw to first was too late to retire McDonald, while Gillespie scored to make it 6-2, bringing Aaron Hill to the plate as the tying run.

Javy Guerra replaced Hawksworth to face Hill, and once again got the Diamondbacks down to their final strike, before Hill drew a walk, which forced Montero home and made it 6-3. That brought Ryan Roberts to the plate as the winning run. Roberts had failed in the seventh and ninth innings to make his mark on the game. The Dodgers had gotten the Diamondbacks down to their final strike four times and been unable to end the game. Could Roberts end it in his third attempt?

He could. Roberts lined the first pitch from Guerra just over the left-field wall to ignite a massive celebration. Between second base and third, Roberts pointed at his manager in the dugout and pumped his fist in emulation of Gibson’s walk-off home run in the 1988 World Series, although Gibson missed seeing it in the rush of players to home plate to greet Roberts, who ripped off his jersey before jumping into the melee.15

This game is the only time in major-league history that a team has come back to win after trailing by five runs in extra innings and down to the final strike.16 Baseball-Reference’s win expectancy stat measures the probability of a team winning at a given point in any game. Only seven times in the major leagues has a team come back to win with a win expectancy below 0.05 percent, with this game being one of them.17 By whatever metric, this game is one of the most improbable comebacks in baseball history.

Roberts was already a beloved figure in the desert, but this game cemented his place in Diamondbacks lore.18

1 The rosters were full of September call-ups. A total of 42 players appeared in the game, 21 from each team.

2 They needed to win both remaining games and have the Brewers lose both of their remaining games. The 2011 pennant races were full of improbable circumstances, as the Cardinals and the Rays eliminated the Braves and the Red Sox, respectively, on the final day of the season. The Rays had to come back from being down seven runs against the Yankees on the final day of the season to eliminate the Red Sox. That comeback (0.31 percent win expectancy) overshadowed the Diamondbacks comeback against the Dodgers the previous day, due to the postseason implications.

4 Nick Piecoro, “Parker Set for MLB Debut: Top Prospect Still Has a Big Fastball After Elbow Surgery,” Arizona Republic, September 27, 2011: C5. The success story didn’t pan out. Parker was a successful pitcher in 2012 and 2013, but another Tommy John surgery followed by a broken elbow in a rehab start meant that he never appeared in the major leagues after 2013; he officially retired in 2018 at the age of 29.

6 Parker was traded to the Athletics in the offseason as part of a package to acquire Trevor Cahill and Craig Breslow.

8 Gibson fought through a number of physical ailments while Diamondbacks manager, undergoing neck, shoulder, and knee surgeries. He was also diagnosed with Parkinson’s the spring after being fired by the Diamondbacks.

9 Jason Foster, “April 21, 1991: The Pirates Stage the Biggest Extra-Inning Comeback in MLB History,” sportingnews.com, April 21, 2020, sportingnews.com/us/mlb/news/april-21-1991-cubs-pirates-biggest-comeback-extra-innings/1ptp5oria5c901xx3now1k5nn8, accessed May 27, 2020. The Pirates-Cubs game in 1991 might be better remembered, and was the first to set the record for biggest extra-inning comeback. But that comeback happened in the 11th inning, while this comeback happened in the 10th.

12 This and other moments from the 10th inning are available at https://youtube.com/watch?v=4fWi0Zt9w9g.

13 Somewhat incredibly, Gillespie’s second hit came the following day, as the Diamondbacks entered the ninth inning trailing the Dodgers 7-0. Gillespie hit a grand slam and Henry Blanco followed with a solo home run, but the Diamondbacks lost 7-5. Had they managed to finish off that comeback, that would easily have been the most incredible two-day stretch in baseball history.

16 Pitch-by-pitch data is not available for most of major-league history, but only in one other game with pitch-by-pitch data has a team been trailing by five runs and down to the final strike and come back to win (Cubs-Brewers on May 10, 2000). Only one other game featured a team down by five runs in extra innings and coming back to win (Pirates-Cubs on April 21, 1991), but in that game, the Pirates never even made a second out, and were never down to the last strike.

17 baseball-reference.com/friv/comeback-wins.shtml contains a list of the 100 most improbable comebacks (by Win Expectancy) in both the regular season and the postseason.