The crowd at Elysian Fields in Hoboken, New Jersey, assembled early and eagerly on September 28, 1865, under sunny skies to watch a baseball game between the Mutuals of New York and the Eckfords of Brooklyn. Although the Eckfords and Mutuals were both considered to be among the premier clubs of the time, on this day the Mutuals were favored. Elysian Fields was situated across the river from Manhattan. Most of the attendees traveled across the Hudson River by ferry from New York City. A crowd of 3,000–4,000 was estimated.[fn]New York Herald, September 29, 1865[/fn]

The game began around 3:20 p.m. The Mutuals jumped out to a 3–0 lead and at the end of four innings led, 5–4. The play on both sides was praised as being of the highest quality. Regarding the Mutuals, the New York Times observed in its game account the next day that the “Mutuals led off at the bat in handsome style, and backed it up with excellent fielding, the first four innings being splendidly played and closely contested on both sides, no finer having been seen this season.”[fn]“Out-Door Sports: The National Game: An Exciting Contest at Hoboken – Another Defeat For the Mutual Club – The Exchampion Eckfords the Victors.” New York Times, vol. 15, No. 4372, September 29, 1865, p. 8, col 3.[/fn]

Then, as the Eckfords came to bat in the bottom of the fifth inning, the tenor of the game changed dramatically. “In the fifth innings, however, the Mutuals fell off in their play considerably … over-pitched balls, wild throws, passed balls, and failures to stop them in the field marked the play of the Mutuals to an unusual extent, it being the only poorly-played innings of the game,” the Times recounted.[fn]Ibid.[/fn] The Mutuals surrendered 11 runs in the fifth inning, ultimately losing by a score of 23–11.

John Snyder, the Eckfords center fielder, led off in the fifth and was safe on an error by third baseman Edward Duffy. The next two batters made hits, and a run scored on a passed ball by Mutuals catcher William Wansley. Two hits later, another runner scored on a throw by Wansley to third base that Duffy “failed to attend to in time.”[fn]“The Championship Contests: An Exciting Game at Hoboken, Defeat of the Mutuals by the Eckfords.” New York Clipper, October 7, 1865. The Clipper contains the most detailed playby- play account of the game.[/fn] After an out, Charles Mills, the Eckfords catcher, had a hit to left field and scored when neither the Mutuals’ second baseman nor center fielder could catch Wansley’s throw to second base. The Eckfords proceeded to pile on several more runs. By the end of the fifth inning Wansley had accumulated two missed catches and six passed balls. He also had four wild throws. Third baseman Duffy was charged with two wild throws and three “failures to stop the ball.”[fn]Ibid.[/fn] McMahon, the right fielder, replaced Wansley as catcher for the final four innings.

“When the players first assembled the confidence in the Mutuals led to odds in the betting in their favor of one hundred to sixty; from that the betting went to eighty, ninety, and at last even, the excitement and interest increasing as the game progressed. It was soon evident that the Eckfords were outfielding their adversaries and equaling them at the bat; and when this fact became apparent the betting changed to odds in favor of the Eckfords, a large amount of greenbacks being invested by the friends of both parties.”[fn]New York Herald, September 29, 1865.[/fn] 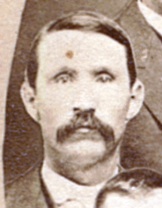 After the game the Mutuals president, New York City Coroner John Wildey, charged Wansley with “willful and designed inattention” during the game. Any remaining doubts about what had transpired were soon dispelled when the Mutuals shortstop, Thomas Devyr, provided a written confession to the club, explaining his participation with Wansley and Duffy in the scheme to throw the game. He wrote:

“Between eleven and twelve o’clock on the morning of the match, I was going toward the ferry, ready to go over to the ground, when I met Wansley, Duffy and another man in a wagon. Bill pulled up and asked where I was going. I told him I was going down toward the ferry and that I was going over to the ground in about an hour. He says, “Do you want to make three hundred dollars?” I say I would like to do anything for that. He says, “You can make it easy.” I asked how. He says, “We are going to ‘heave’ this game, and will give you three hundred dollars if you like to stand with us. You need not do any of the work, I’ll do all that myself and get all the blame.”[fn]“’Hippodrome’ Tactics in Base Ball: How To Heave a Game.” New York Clipper, November 11, 1865; reprinted in Dean A. Sullivan, compiler and ed., Early Innings: A Documentary History of Baseball, 1825-1908 (Lincoln and London: University of Nebraska Press, 1995), pp. 49-53.[/fn]

Wansley told Devyr that his and Duffy’s participation in the scheme was merely to convince the gambler providing the money that there were sufficient participants to ensure its success. The three received $100 before the game, of which Devyr got $30.[fn]Ibid.[/fn]

Devyr, Wansley, and Duffy were banned at the next convention of the National Association of Baseball Players. Less than two years later, the Association’s Judiciary Committee dismissed the complaint against Devyr “on account of lack of legal proof of his collaboration with Wansley.”[fn]New York Clipper, May 18, 1867.[/fn] The consensus appears to have been that Wansley was the organizer and primary culprit, and that the younger and naïve Devyr merely went along. In September 1868 the Mutuals unilaterally reinstated Duffy, which set off an administrative battle, the procedural history of which would be too lengthy to include in this account. The end result was that Duffy was reinstated.  And, by the National Association convention in 1870, so was Wansley.[fn]Ryczek, William J. When Johnny Came Sliding Home (Jefferson, North Carolina: McFarland & Company, Inc., 1998). This book contains a thorough discussion of the struggles of baseball’s governing bodies with respect to the discipline of the three men.[/fn] 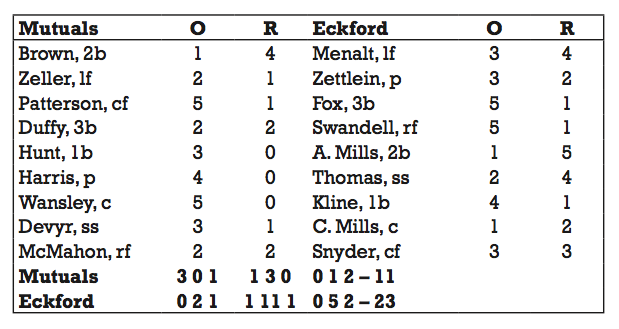