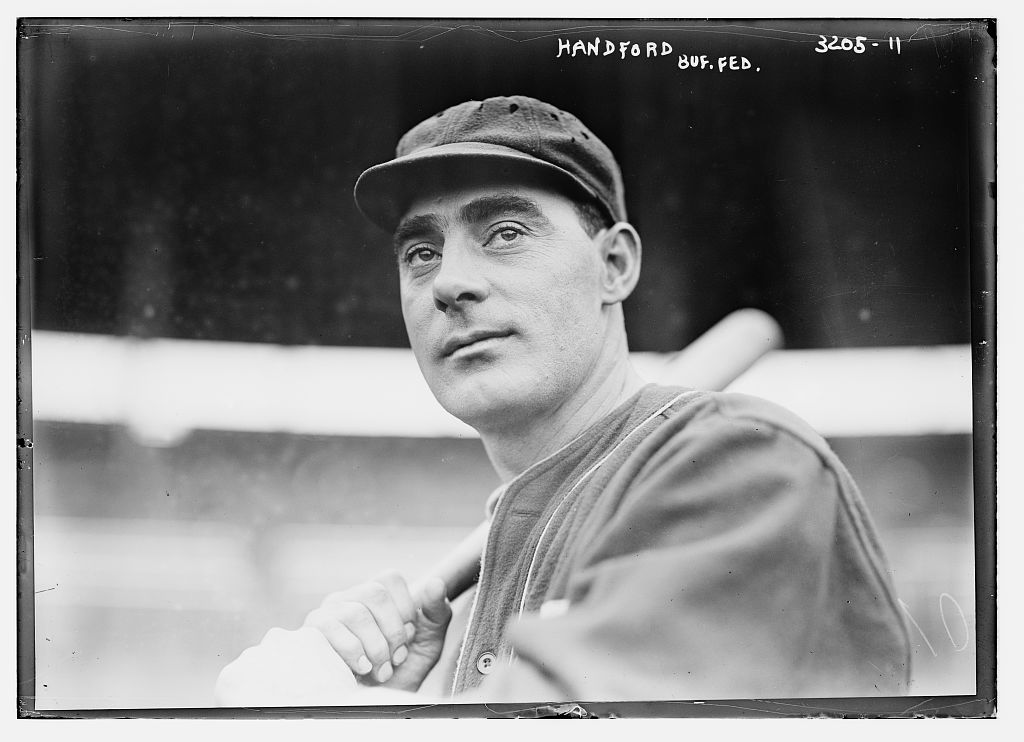 “It was a freak contest.”1 That’s how the Buffalo Evening News summed up the action between the Buffalo and Kansas City teams at Buffalo’s International Fair Association Grounds on September 28, 1914. It seemed to be shaping into an utterly forgettable affair through seven innings. Loose fielding and poor pitching were the order of the day. Some blamed the lethargic play on the cold weather. The Buffalo Commercial said, “If the players had been engaged in football instead of baseball, they might have displayed more ginger.”2 However, just when it appeared that the Kansas City Packers had staked a claim to a victory, an explosion of runs and seesaw lead changes in the final two innings turned this poorly played meeting into an exciting spectacle.

The teams had split the opening two games of the series. Buffalo was sitting 6½ games behind league leader Chicago with 13 games remaining. Any realistic hopes of a pennant were gone for both teams. But Buffeds manager Larry Schlafly was determined to make the most of the remaining schedule and was focused on at least overcoming the team’s one-game deficit with Baltimore to overtake third position in the standings. “We’ll be in first division when the curtain is rung down and as near the top as hard work can possibly bring us,” he promised.3 He sent lefty Al Schulz to the mound that afternoon. Kansas City skipper George Stovall countered with right-hander Pete Henning.

Schulz got off to a rough start for the Schlaflyites. He surrendered two quick walks to start the first inning and Duke Kenworthy took advantage with an RBI double. This was followed by a pair of singles from Ted Easterly and Art Kruger. The Kaycees then tried to break the game open by attempting a double steal. They evidently pushed their luck too far as Kruger was thrown out at second base for the third out. Stovall was left stranded on third base. In the end, Schulz and the Buffeds were lucky to escape the frame trailing by only three runs.

Buffalo began to fight its way back in the second inning. It did this with patience at the plate and timely hitting. Pete Henning allowed only one hit in his 5⅓ innings of work. However, control proved to be his Achilles heel. The four walks he issued led to as many runs. Fred Smith took full advantage of one such free pass in the second inning when he doubled to bring a run across and cut into the Kansas City lead. Henning was able to regain control of his pitches for the time being and escaped the second without further damage. Smith’s double was the only hit he allowed until the sixth inning.

The Packers added runs in the fifth and sixth innings to stretch their lead to 5-1. However, their entire advantage was nearly lost in the bottom of the sixth when Pete Henning imploded in a fit of wildness. He walked Del Young and Joe Agler. And after throwing two balls to Tom Downey, manager Stovall had seen enough and replaced Henning with righty Dan Adams. Adams proved to be even less reliable than Henning. He completed the walk to Downey and delivered two balls to the next batter, Tex McDonald, before being replaced with lefty Gene Packard. Buffeds manager Schlafly made a managerial change of his own and brought in Bill Louden for the light-hitting McDonald. It proved to be the correct move as Louden singled to plate two runs. Packard added a wild pitch to score Downey and put the Buffeds within one run at 5-4. The Packers’ inability to consistently throw strikes and a timely hit from a Buffalo bat had almost entirely closed the gap.

The game then erupted with a number of wild twists and turns in the eighth inning. The Buffalo Morning Express noted, “There was something doing every minute in the last two innings.”4 The Packers started off the fireworks in the top half. They got to Harry Moran with a pair of singles. Art Kruger then followed with a double that scored two. At this point Schlafly opted for righty Dan Woodman. Woodman was able to end the Kansas City threat but not before yielding a fly ball that scored Johnny Rawlings from third. In all, Kansas City plated three runs in the frame and looked to have once again established a comfortable lead of 8-4 going into the home half.

Buffalo came right back with an explosion of five runs in the bottom half of the inning. Once again poor pitching and timely hitting were factors. In addition, poor fielding increasingly became a prominent feature on this cold afternoon. Most importantly, second baseman Tom Downey’s heroics in the eighth proved decisive to the outcome. And it was timely hits like Downey’s that allowed the Buffeds to match the Packers in runs on half the number of hits.

The Buffeds’ Hal Chase led off the bottom of the eighth with a single. Charlie Hanford followed with a single to center field that got past Kruger and allowed Chase to score. The rally continued as Clyde Engle hit a ball in the direction of George Perring that went for a single. Perring threw to second in an attempt to prevent Engle from advancing. However, Kenworthy muffed the play and surrendered the base to Engle anyway. Fred Smith then came to the plate and sent a long fly into right field that allowed Hanford to tag and score from third. Engle was able to advance to third before right fielder Grover Gilmore could return the ball to the infield. Catcher Walter Blair reached base on a fielder’s choice and then Agler walked to load the bases. It was at that pivotal moment that Tom Downey stepped to the plate. He came through with a triple to deep center field that put Buffalo in front for the first time all day. The rally ended two batters later as Bill Collins struck out. However, the damage had been done.

George Stovall’s men were not discouraged. They replied with not just one but two runs in the top of the ninth. Stovall himself took matters into his own hands and started the rally off with a single to center field. Kruger followed with a hit to right field that exposed a multitude of the Buffeds’ defensive frailties. The ball got by Bill McDonald in right. He chased it down and got it to Hal Chase. Chase could see Stovall rounding third and he attempted to throw him out at home. However, his relay to the plate was wild — it went all the way to the grandstand. It allowed Stovall to score easily and made it possible for Kruger to come all the way around the bases and touch home before the ball could be retrieved.

The Buffeds had bungled their short-lived advantage with a flourish of spectacularly poor fielding. It would have been a fitting end to the afternoon. However, Kansas City matched this ineptitude with some atrocious fielding of their own in the bottom half of the ninth that allowed the Buffeds to tie the score.

Charlie Hanford doubled with one out. Clyde Engle then hit a grounder to Cliff Daringer at third base. Daringer threw wildly to first base and Hanford scored the tying run. Gene Packard was able to get the final two outs without further damage. The score had somehow evened out after all of the miscues and excitement.

Upon completion of the ninth inning, umpire Bill Brennan called the game a draw due to darkness and this strange contest came to an end. The Buffalo Enquirer quipped that it was a show of “rare judgment”5 on the arbiter’s part. The teams made up for the lack of a decisive result with a doubleheader the following day.

In addition to sources listed in the Notes, the author also used the following for background information:

4 “Battled Nine Innings to Tie: Buffeds and Kanfeds Could Not Untangle Themselves in Yesterday’s Game,” Buffalo Morning Express and Illustrated Buffalo Express. September 29, 1914.