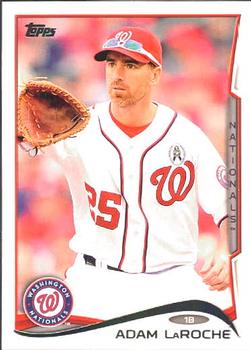 It could only have happened in September.

By the time the 14-inning, 5-hour 34-minute marathon was over, the two teams had combined to use 51 players including 18 pitchers; suffered three blown saves; seen three lead changes in extra innings; watched two pitchers escaping extra-innings, bases-loaded one-out jams; and had a pitcher pinch-hitting. At least the game started at noon.

The Los Angeles Dodgers’ starting pitcher Carlos Frías (no record, 5.65 ERA) was making his first major-league start. He had debuted the previous month but had only pitched in relief. His longest appearance to date had been four innings. The Nationals’ pitcher was Jordan Zimmermann (10-5, 2.93 ERA), who had been a regular in the Nationals rotation since his call-up in April 2009.

Despite the difference in their experience, their results through the first six innings of the game were quite similar: Frías allowed three hits and one walk, Zimmermann allowed two hits and two walks, although Zimmermann had eight strikeouts to Frías’s four. Neither allowed a run.

With Frías at 77 pitches, Dodgers manager Don Mattingly replaced him on the mound with J.P. Howell in the top of the seventh. The results continued the “no scoring” trend: Howell allowed a single but nothing else to the Nationals.

The Dodgers finally broke through against Zimmermann in the bottom of the seventh. After a quick lineout by Hanley Ramírez, Zimmermann surrendered a double to Carl Crawford, followed by a home run to Justin Turner. (Turner said that he’d been hit by a pitch, so Mattingly asked for a review, but the “not hit” call was upheld. Turner was probably happier continuing the at-bat, considering the result.) With the score 2-0, Dodgers, and his starter at 94 pitches, Nationals manager Matt Williams made the first of his nine pitching changes, bringing in Matt Thornton. Thornton got two quick strikeouts to end the inning.

Brian Wilson took the mound for the Dodgers in the top of the eighth. He struck out two and gave up one walk. Although only one more out was needed, Mattingly brought in Kenley Jansen (the Dodgers’ usual closer) to finish the inning. He walked Jayson Werth, but got Ian Desmond to line out, ending the Nationals’ half of the eighth with the score still 2-0, Dodgers. The Nationals called on Drew Storen for the bottom of the eighth. He answered the call by allowing only a single to Dee Gordon, who was erased when he was caught stealing. (He was originally called safe, but Williams’s challenge succeeded in overturning the call.)

Down to their last chance in the top of the ninth, the Nationals pulled ahead. Jansen continued pitching, immediately allowing a single to Bryce Harper and a home run to Adam LaRoche, tying the score, 2-2. LaRoche came off the bench as a pinch-hitter and stayed in to play first base for the remainder of the game. He had been hoping to spend the day on the bench, resting his sore back in advance of the cross-country flight later that day.1 After Asdrúbal Cabrera was out on a foul pop, Danny Espinosa singled and stole second. Steven Souza grounded out, advancing Espinosa to third. When Denard Span singled on the seventh pitch of his at-bat, allowing Souza to score, the Dodgers decided that was enough for Jansen.2 Jansen had faced eight batters, having thrown 35 pitches. LA brought in Pedro Báez to get the last out, but the damage had been done: The Nationals were leading 3-2 going into the bottom of the ninth inning. It was Jansen’s fifth blown save of the year.

Nationals closer Rafael Soriano was called on to save the win. He started out well enough: Adrián González lined out on the first pitch. After he walked Andrew Ethier, he struck out Crawford. Then Turner hit a long fly to right: Werth could have ended the game with a catch, but the ball bounced off his glove,3 allowing Ethier to tie the score, 3-3. Soriano struck out Joc Pederson to end the inning. Although the run was unearned because of Werth’s error, Soriano was charged with his sixth blown save of the year. The game was headed to extra innings.

Baez stayed in to pitch the 10th for the Dodgers, working a 1-2-3 inning on just 11 pitches. The Nationals summoned Craig Stammen for the bottom of the frame, with nowhere near the same effectiveness. He started with a quick groundout by Álex Guerrero, but then walked A.J. Ellis and gave up singles to Gordon and Yasiel Puig. The bases were loaded with only one out: The odds favored a Dodgers walkoff with a single swing of the bat.4 Given the depth of the Nationals’ bullpen from the September call-ups, Williams had plenty of relievers to choose from to replace Stammen.5 He chose Xavier Cedeño, who struck out González. He then called on Aaron Barrett, who struck out Juan Uribe to end the inning with the bases still loaded and the score still tied.

Jamey Wright took the mound for the Dodgers for the top of the 11th. He started by hitting LaRoche on the elbow with a pitch: LaRoche took his base but was unsure if he would be able to swing the bat or if he’d have to bunt for the rest of the game.6 Cabrera bunted him to second, then Sandy León walked. Kevin Frandsen grounded out, advancing the runners to second and third. But the Nationals failed to capitalize on the opportunity when Span grounded out to first. Jerry Blevins was Williams’s choice for the bottom of the 11th. Crawford and Turner each singled on Blevins’ first pitch. After a groundout and an intentional walk to Matt Kemp, the Nationals again were facing a bases-loaded, one-out jam.7 On the 11th pitch of his at-bat, Drew Butera finally popped out to third. Gordon struck out swinging, ending the second consecutive inning with the bases loaded and the score still tied.

Brandon League was Mattingly’s choice for the top of the 12th. A walk, a single, a strikeout, and a single resulted in League facing LaRoche with the bases loaded. Somehow, aching elbow and all, LaRoche managed a single into left, scoring two. But that was all the Nationals could manage: League got a fly out and a groundout to hold the score at 5-3, Nationals. Tyler Clippard got two quick outs in the bottom of the 12th before allowing a single to Uribe. But that single meant that when Crawford homered, the game was tied, 5-5. It was Clippard’s sixth blown save. Clippard struck out Turner to end the inning.

Kevin Correia, the Dodgers’ eighth and final pitcher, started the 13th inning. He had been a starting pitcher for the Twins, and also started three games after being traded to the Dodgers in mid-August. His most recent appearance for the Dodgers had been the previous week, when he had given up the winning run to the Padres in the 12th inning.8 History did repeat itself, but not immediately. Correia got three quick outs, including Nationals pinch-hitting pitcher Doug Fister,9 asked to pinch-hit because the Nationals were down to their last bench player, catcher Wilson Ramos. (Fister grounded out to first.) In the bottom of the 13th, Williams told his 10th and final pitcher, Blake Trienen, that he was running out of pitchers, so the hurler might be out there a while.10 Trienen rose to the occasion, giving up only a single to Pederson, holding the score at 5-5.

Correia started the top of the 14th by striking out Werth. But then Desmond reached on an error, and Harper walked. Correia threw a wild pitch to LaRoche, allowing Desmond to advance to third. That proved costly when LaRoche grounded to the shortstop: The Dodgers got the force out at second, but LaRoche hustled to first, avoiding the double play and allowing Desmond to score. The run was LaRoche’s fifth RBI for the game, tying a modern record.11 The Nationals weren’t finished. The next batter, Cabrera, hit a home run to bring the score to the final 8-5, Nationals. León flied out to end the half-inning.

Trienen returned to the mound for the bottom of the 14th trying once more to save the game for the Nationals. He succeeded where his teammates had failed: He surrendered one single, but a strikeout and two groundouts ended the Dodgers’ chances at a comeback. Hours later than they expected, the Nationals wrapped up their road trip with a win, thanks to some late-inning heroics from Adam LaRoche, backed by contributions from almost everyone on the roster.12

1 “A day when he probably expected to take it easy on the bench,” Pete Kerzel, masnsports.com, September 3, 2014, Hearing from the clubhouse after Nats prevail in wild 14-inning marathon, masnsports.com/nationals-pastime/2014/09/hearing-from-the-clubhouse-after-nats-prevail-in-wild-14-inning-marathon.html.

2 Jansen’s average outing for the year was just over 15 pitches, and he typically faced three or four batters. He had not faced eight batters before in 2014. baseball-reference.com/players/gl.fcgi?id=janseke01&t=p&year=2014.

4 The Baseball Reference Win Probability Chart showed an 83 percent chance of a Dodgers win at this point.

7 Again, the Baseball Reference Win Probability Chart showed an 83 percent chance of a Dodgers win at this point.

9 Fister’s BA was .075, not ideal for a pinch-hitter, but he had pitched the day before so was unavailable out of the bullpen. Pitcher Ross Detwiler had also worked the day before, but his BA was a pristine .000. baseball-reference.com/players/gl.fcgi?id=detwiro01&t=b&year=2014.

12 Olivia Witherite, masnsports.com, Williams on call-ups: “You have more bullets.” The Nationals roster stood at 31 after the September call-ups, masnsports.com/nationals-pastime/2014/09/williams-on-call-ups-you-have-more-bullets.html. Three starting pitchers, one relief pitcher, and catcher Wilson Ramos did not appear in the game.