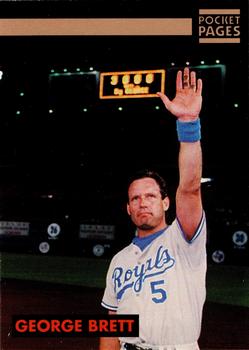 George Brett entered the 1992 season as an accomplished veteran leading a rebuilding team. The 1991 Royals finished with an 82-80 record, 13 games behind the AL-West-leading Minnesota Twins and only one game removed from the basement. Kansas City hadn’t reached the postseason since winning the 1985 World Series, although the Royals won 92 games during the 1989 season. They did have young stars returning, including homegrown staff ace Kevin Appier, who led the pitching staff with 13 wins and 207⅔ innings; Brian McRae, who paced the offense with 152 games, 663 plate appearances, and 20 stolen bases; and Tom Gordon, who recorded a team-high 167 strikeouts.

Brett, entering his 20th season, had amassed 2,836 career hits, 163 shy of the vaunted 3,000-hit milestone. He won the 1990 AL batting title with a .329 average but struggled in ’91 with a more pedestrian .255 average, 10 home runs, and 61 RBIs. Throughout the 1992 season and even before the 1991 season, questions arose about Brett’s retirement, especially after longtime Royals Willie Wilson and Frank White departed Kansas City.1

After the 1991 season the Royals, continuing to contemplate life after Brett, made significant changes to their roster. All-Star Danny Tartabull was allowed to leave in free agency while first baseman Wally Joyner was signed from California. The Angels’ senior vice president for player personnel, former Royals skipper Whitey Herzog, who twice thought a new deal with Joyner was approved, were now hoping to land Tartabull. The highly-popular Joyner,2 who signed a one-year deal, was looking forward to his new environs though he was a fan favorite in California.3 Two days later, the Royals traded two-time AL Cy Young Award winner Bret Saberhagen and versatile infielder Bill Pecota to the New York Mets for Gregg Jefferies, Kevin McReynolds, and Keith Miller.4 The Mets gained instant credibility for the deal,5 while Royals GM Herk Robinson noted, “What we did was a difficult thing. We have finished sixth the last two seasons so if Bret Saberhagen won four more Cy Young Awards and we didn’t win it doesn’t mean a thing.”6 The team also parted ways with first baseman Todd Benzinger and outfielder Kirk Gibson. The numerous offseason moves had far-reaching roster impacts, down into the minor leagues.7

Royals manager Hal McRae now looked forward to his first full season at the helm. He joined the 15-22 last-place Royals in May 1991 and attained a 66-58 record. McRae preached NL-style play, commenting, “We will force the action, create maximum pressure for nine innings, force the other team to make the perfect play.”8 The Sporting News predicted Kansas City would win the AL West based on its pitching, defense, and speed, noting “everything must work, but the material is there.”9

Kansas City struggled from the outset, losing its first seven games and becoming the last team to win a game. The Royals finished April with a 3-17 record, 9½ games behind the Oakland Athletics. As the summer dragged on, the Royals escaped the basement but focus gradually shifted from team success to Brett’s milestone pursuit.10

As Brett approached the milestone, rumors circulated about his desire to hit  number 3,000 at Royals Stadium; he acknowledged the difficulty of timing the event: “I know it’s going to get worse as I get closer. The toughest part is just trying to concentrate on the basics, just going out each night and forgetting about 3,000 and just hitting the ball hard.”11 Kanas City entered the September 30 game against the Angels with a 70-87 record, splitting the first two of the four-game series while Brett missed both games fighting a shoulder ailment.12

The Angels were not faring any better, two games behind the Royals. California struggled throughout May and June, spending most of the summer teetering between fifth and sixth place. The solid pitching staff was led by upcoming star Jim Abbott and veteran Mark Langston, but the offense struggled after Joyner left and several veterans endured subpar seasons.

Kansas City manager McRae selected Rick Reed for the start. Reed, who spent the previous four seasons with the Pittsburgh Pirates and was the 1991 American Association Pitcher of the Year, was signed as a free agent in April. He opened the season with the Omaha Royals in the American Association and was promoted to Kansas City in June. Reed was 2-7 with a 4.04 ERA over 91⅓ innings entering his final start of the season.

His mound opponent was Julio Valera, pitching his first full season in the majors and posting the best year of his career. He also was making his last start of the season, compiling an 8-10 record and a 3.69 ERA thus far. Valera’s 3.2 Wins Above Replacement (WAR) in 1992 placed him third on the Angels’ staff, just behind Langston. The Angels traded Dick Schofield and minor-leaguer Julian Vasquez to the Mets for Valera just after the season began.

Miller started the game by flying out to right field, and Joyner followed with a groundout to first base. Brett delivered the game’s first hit, and career number 2,997, on a slicing double to left field. Jeffries singled home Brett for the game’s first run. After two more singles, Jefferies was thrown out at home to end the half inning. Reed allowed one baserunner in the bottom half, Chad Curtis, who was caught stealing. Kansas City led 1-0 after one inning. Both sides allowed a lone hit and subsequent stranded runner during the second inning.

In the third frame, Joyner led off with a single, and Brett’s 2,998th career hit was a single to center that advanced Joyner to third. Jefferies delivered another timely knock, scoring Joyner and giving Kansas City a 2-0 lead. The inning ended after a double play and infield groundout. The Angels threatened in the third with two outs when Damion Easley singled and Curtis was hit by a pitch, but Reed struck out Junior Felix to end the threat. In the fourth inning, both teams had baserunners though neither team scored.

Joyner began the fifth inning with a solo shot that gave Reed another insurance run and increased Kansas City’s lead to 3-0. Brett followed with his third base hit that evening —and career number 2,999 —on a 1-and-0 forkball that he lined into center field for a single. He was erased when Jefferies hit into a double play. Valera allowed singles to Mike Macfarlane and Jim Eisenreich, then prevented further damage by striking out McRae. Tim Fortugno replaced Valera for the top of the sixth, and walked the first batter, Kevin Koslofski. But Fortugno retired the next three batters, stranding Koslofski. Reed continued his strong performance, setting down the Angels in order in the bottom half.

In the seventh inning, Joyner popped out to short for the first out. Brett approached home plate for the fourth time. On the first pitch, he singled, a line drive over second base to become the 18th major leaguer to get 3,000 hits. Brett reached the career milestone exactly 20 years after Roberto Clemente delivered his 3,000th hit.13 Brett was mobbed by his teammates and received a five-minute ovation from the appreciative crowd. He became the second player to achieve the feat at Anaheim Stadium, following Rod Carew, who hit number 3,000 seven years earlier.14

After the game he mentioned three people he hoped were watching “from a more heavenly seat”: his father, Jack Brett, hitting instructor Charlie Lau, and manager Dick Howser.15 After the festivities subsided and the game resumed, Jefferies flied out to right field. With two outs and the crowd still buzzing, Brett was picked off while talking with California first baseman Gary Gaetti. Brett commented, “He asked me if my wife was here and I said yes, and I had friends here from Kansas City. … He didn’t even let me finish the sentence. Believe me, my mind wasn’t on being picked off.”16

After the prolonged top half, Reed took the mound for the bottom of the seventh and retired the Angels in order on a groundout and two fly outs. Macfarlane led off the eighth inning with his 16th clout to extend Kansas City’s lead. Fortugno didn’t allow any more baserunners in the eighth, but ran into trouble in the ninth when the Royals loaded the bases. Fortugno then got Mike Macfarlane on a grounder. Reed finished strong, allowing only one baserunner over the final four innings. Brett finished the game with four hits, supporting Reed’s seven-hit shutout.

Brett was inducted into the Baseball Hall of Fame in 1999, elected on his first ballot with 98.2 percent of the vote. He had retired in 1993 after 21 seasons with the Royals as one of only four players with 3,000 hits, 300 home runs, and a .300 batting average, joining Stan Musial, Willie Mays, and Hank Aaron in truly rarefied company.