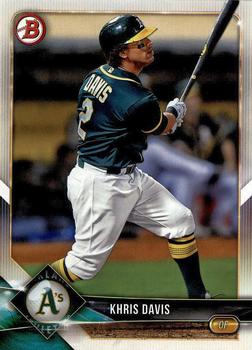 The lead-up to Game 162 of the 2018 season for the Los Angeles Angels and Oakland Athletics seemingly offered very little drama. Los Angeles was completing another disappointing campaign, sitting at 79-82 despite the efforts of perennial Most Valuable Player candidate Mike Trout1 and newly arrived Japanese star Shohei Ohtani, soon to be named American League Rookie of the Year.2

The A’s came into the game at 97-64, locked into the visiting-team slot for the AL wild-card game to be played at Yankee Stadium in three days. For Oakland, the goal of Game 162 was to rest some stars, give some others an at-bat or two, and make sure everyone came out of the game healthy.

For A’s designated hitter Khris Davis, however, his presence in the starting lineup raised a rather whimsical question … would he end the day as he started it, batting .247 for the season?

Why was this so notable? Because prior to this four-year run, no player who qualified for the batting title — meaning at least 3.1 plate appearances per game played — had ever compiled the same batting average in four consecutive seasons.3 Put another way, according to the Elias Sports Bureau, no player in major-league history had the same batting average rounded to three decimal places in four consecutive seasons, with a minimum of 10 at-bats each year.4 There had been similar streaks in other statistical categories, but never in batting average.5 Davis even went so far as to have a career spring-training batting average of … yes .247, through 2018.6

For a team that was 24 games out of first, with no giveaway for the final game of the year, a nice crowd of 36,892 gathered in Anaheim Stadium. Perhaps they were there to watch Trout go for his 40th homer of the year. (They would be disappointed: He got one plate appearance, lining out to left field, and then was done for the day.) But how many of the fans were aware of the “.247 drama” unfolding before them?

Davis stepped to the plate for the first time that day as the fourth batter in the top of the first. Leadoff man Nick Martini had walked against Angels starter Matt Shoemaker and made it to third two outs later. To that point in his career, Davis had good success against the righty Shoemaker, going 6-for-13 with two homers, two doubles, and three walks.8 He swung at Shoemaker’s first pitch,9 an 89 MPH fastball that darted to the inside lower part of the strike zone. He lifted it to right-center field, where Trout collected it for the third out of the inning. Davis’s average still stood at .247 (.246957 to be precise).

After the teams traded two-run homers by Los Angeles’ Jefry Marte in the bottom of the first and Oakland’s Stephen Piscotty in the top of the second, Davis came to bat with two out and the bases empty in the top of the third. Shoemaker had worked hard to the prior two batters, needing six and 10 pitches to put them away. Would Davis work the count?

Shoemaker worked Davis down in the zone again, getting ahead 0-and-2 on two off-speed pitches that barely nicked the bottom of the strike zone. After a third-pitch ball away, Davis got another pitch on the outer half of the plate, this time a little bit higher in the zone, and he swung and missed at an 84 MPH splitter to end the inning.

Melvin drained any further drama from Davis’s “pursuit” of .247, pinch-hitting Jonathan Lucroy for him when he was due up in the top of the sixth. Davis ended the year with his major-league-leading and career-high 48 homers, and 123 runs batted in (also a career high). And he had indeed ended the season, once again, at .247.

As for the game itself, the A’s took a 4-2 lead into the bottom of the ninth, before the Angels rallied for three runs, capped by Taylor Ward’s walk-off homer off “closer for the day” Chris Hatcher.10

What did Melvin think of Davis’s “accomplishment”?

“You know what? That is just tough to comprehend. Going into the last at-bat, I wasn’t really sure if it would remain there, but it feels like if he had 10 more at-bats it would remain there the way his last couple years have gone. That’s almost impossible to do. The power numbers have gone up, he’s a better hitter even though the average looks the same. But I can’t explain that. The baseball gods obviously want him to hit .247.”11

As a postscript, it should be noted that Davis struggled to match the power output of 2018, as injuries hampered his swing in following years. Those maladies also torpedoed his batting average; he batted .220 and .200 the next two years. The .247 streak thus ended at four. It was fun for those who take joy in the statistical quirks of the game. It even was memorialized on a T-shirt, which sells, of course, for $24.70.13

In addition to the Sources cited in the Notes, this article relied on the Baseball-Reference.com and Retrosheet.org websites for pertinent material and the box scores noted below.

1 Since 2012 Trout had won two MVPs, and finished second three times and fourth once.

3 Excluding batting averages of .000, which are comparatively simpler to achieve, especially for pitchers.

10 It would turn out to be Hatcher’s final game in the big leagues. He was left off the playoff roster and never pitched for another team in pro ball.