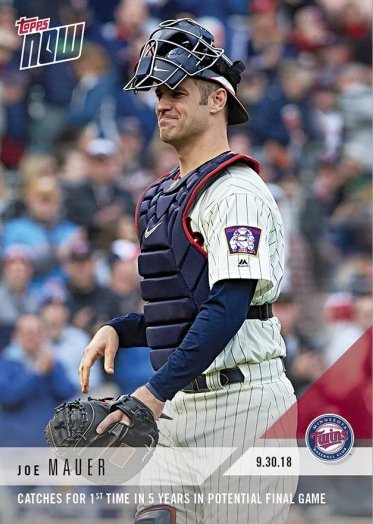 In the last of the eighth inning of the Minnesota Twins’ season-ending game versus the Chicago White Sox, a Twins official walked past the official scorer and whispered, “Next inning, look for the most famous substitution ever.”

The official scorer didn’t know exactly what to expect, but he knew whom the substitution would involve: Joe Mauer.

Born and raised in nearby St. Paul as one of Minnesota’s best all-round athletes ever, Mauer was the first player taken, by the Twins, in the 2001 amateur draft. He arrived in the majors three years later and was the top catcher in baseball in the following years, receiving the American League Most Valuable Player Award in 2009.

A 2013 concussion ended his career as a catcher, and Mauer moved to first base. A long-term contract he signed before the 2010 season was expiring now, and many assumed that this game, the season finale, would be his last.

Manager Paul Molitor said that Mauer would start at first base. Asked if Mauer might catch, the skipper said, “I don’t think you have to worry about that.”1

The day and the game focused on Mauer, and there were surprises for all, including the honoree. “When his twin 5-year-old daughters surprised him by joining Dad at first base for the national anthem Sunday,” wrote Phil Miller in the Minneapolis Star Tribune,“Joe Mauer and a ballpark full of fans shared a farewell moment that couldn’t be topped. But he did.”2

Chicago got a couple of runs off Zack Littell in the top of the first, and the Twins were down 2-0 as Mauer walked to the batter’s box to start the bottom of the inning. The crowd rose for a long ovation for Mauer, who took his time and waved to the crowd. The situation was observed in the press box by the field timing coordinator, who activated a clock shown in the outfield that is intended to keep the game moving by getting batters and pitchers ready to play. She noted that Mauer was taking too long to get into the box. Not a sentimentalist, the field timing coordinator followed protocol and wrote Mauer up for a violation, even though she knew he would never be penalized for the infraction.

Mauer grounded out in the first, and the Twins remained behind until the fourth, when they took the lead on a Jake Cave home run and a two-out, two-run single by Logan Forsythe. Minnesota added two in the sixth on Max Kepler’s home run with Mitch Garver aboard and held the lead despite two runs by the White Sox in the seventh.

In the bottom of the seventh, Mauer came up for what would be the final time in his career. He worked the count, as he usually did, and lined a 3-and-2 pitch for a double to left-center, hustling into second base with a perfect representation of the opposite-field stroke Minnesota fans had become accustomed to seeing.

The Twins held the 5-4 lead after eight innings, but no one was emerging from the bullpen or the dugout for the top of the ninth. Twins players in the first-base dugout looked to their left; those in the stands and the press box knew the team was doing something to honor Mauer but wondered what it would be.

Finally, Mauer emerged from the dugout, heading to the plate and wearing catcher’s gear. The crowd erupted again as the rest of the players finally took the field and Matt Belisle came into pitch. Mauer was going to end his career behind the plate, where he had started it.

Yoan Moncada stepped in for the White Sox and looked at Belisle’s first pitch, which was intentionally outside.3 Mauer caught the pitch, walked toward the mound, and was met halfway by Belisle. The two embraced as the fans cheered. Mauer then walked off the field, with Chris Gimenez taking his place.

Belisle had been the reliever at the request of Mauer, his close friend.4 In a different circumstance, Trevor May would have been called on to protect the lead in the ninth. Two pitches after Mauer’s departure, Moncada lined a double to left. Now May was brought in. Despite having to enter with a runner on second and no out, May was up to the job. He struck out Ryan Cordell and Yolmer Sanchez and got Leury Garcia to fly out and end the game.

For the Twins, what had been a disappointing season at least ended with six straight wins and a memorable event.

Nearly seven weeks later, Mauer made it official. On November 9 the Twins issued a letter from Mauer to the fans: “After much consideration, I have decided to retire from playing baseball. … The decision came down to my health and my family. The risk of concussion is always there, and I was reminded of that this season after missing over 30 games as a result of diving for a foul ball. That’s all it took this time around, and it was all I needed to bring me back to the struggles I faced in 2013. The concussion I experienced that season not only changed my life professionally with a move to first base but changed me personally as well. I am soon to be a father of three,5 and I find myself thinking about my future health and its impact on my family more than I had years ago. … Thank you Minnesota Twins, and thank you fans, for making my career as special and memorable as it was. Because of you I can leave the game I love with a full and grateful heart.”6

Memories and scoresheets of the authors, one of whom was the field timing coordinator and the other the official scorer.

3 According to Minneapolis Star Tribune columnist Jim Souhan, the Twins let the White Sox know what they had planned, and Chicago manager Rick Renteria agreed to not have the leadoff hitter in the ninth swing at the first pitch. No one wanted the risk of a foul tip into Mauer’s face mask, the event that had triggered the end of his catching days in 2013.

5 Mauer and his wife, Maddie, have twin daughters, Emily and Maren; a few days after Mauer announced his retirement, Maddie had a boy, Charles Joseph.