September 4, 2015: Michael A. Taylor wins it for Nats with walk-off home run

September 4, 2015: Michael A. Taylor wins it for Nats with walk-off home run 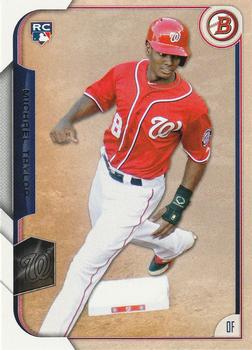 The Washington Nationals (68-65) were coming off a big win the night before, having trounced Atlanta (54-80, 20½ games back of the Mets) by the score of 15-1. Although the Nationals were trailing the Mets by six games in the National League East, they hoped to gain ground in the standings before the Mets came to town on September 7.1

Tanner Roark (4-4, 4.54 ERA) was pitching for the Nationals, his first start since June 28 (although he had a number of multiple-inning relief appearances in the meantime). After Nick Markakis lined out, Cameron Maybin singled to left. With Freddie Freeman batting, Roark and Ryan Zimmerman picked off Maybin: He tried a swim move but was tagged on the jersey before he could get his hand back on the bag. Freeman bounced one off the out-of-town scoreboard in right and was into second standing, well before the throw-in from Jayson Werth. Roark then plunked A.J. Pierzynski on the elbow guard, sending him to first. But Adonis García grounded into a force out at second on the first pitch, allowing Roark to get out of the inning on only 16 pitches.

Julio Teheran (9-7, 4.62 ERA) took the mound for the Braves. He was coming off a 20-6 loss to the Yankees in which he gave up eight runs. Werth and Anthony Rendon were out quickly. Then Bryce Harper stepped to the plate. The previous night he had not swung at a pitch, but had walked four times and collected an RBI. Taking a different approach this night, he worked the count full, then deposited the sixth pitch in the upper deck for his 32nd homer of the year. Zimmerman then flied out to Markakis with the score 1-0, Nationals.

Neither team scored in the second inning.

In the top of the third, Teheran grounded out, then Markakis walked. Maybin hit a line drive that Yunel Escobar leapt to spear in midair, so Markakis had to hold at first. Left fielder Clint Robinson bobbled Freeman’s fly ball (perhaps having lost the ball in the lights), so his throw-in to third was not in time to catch Markakis speeding from first. Pierzynski then singled, allowing Markakis to score. García popped up to Harper in center, ending the half-inning with the score tied, 1-1. In the bottom of the third, the Nationals managed to load the bases with a Jose Lobaton walk, a Roark sacrifice, a Werth single, a Rendon strikeout, and Harper’s 105th walk (13th intentional). The intentional-walk strategy worked for the Braves: Zimmerman flied out close to the warning track, leaving the bases loaded and the scored unchanged.

Nothing for the Braves in the top of the fourth. In the bottom, Robinson reached on an error: The ball bounced right between Garcia’s legs into left. Escobar walked. Off the bat, Ian Desmond’s fly looked as if it would score both runners, but Markakis took a perfect route for a running catch at the right-field line. Robinson scrambled back to second and tagged up to get to third, but Lobaton bounced back to Teheran to start a 1-6-3 double play and end the inning.

Teheran flied out to start the fifth inning. After Roark walked Markakis and Maybin doubled (advancing Markakis to third), pitching coach Steve McCatty paid a visit to the mound. The Nationals decided to walk Freeman to load the bases with only one out. With Roark at 69 pitches, Nationals manager Matt Williams brought in Matt Thornton. The pitching change had the desired outcome: Pierzynski popped out, letting Desmond throw in to hold the runners. Thornton then induced a groundout by García for the third out. Teheran got three quick outs in the bottom of the fifth, including Tyler Moore pinch-hitting for Thornton.

In the sixth, Williams called on Felipe Rivero2 to face Jace Peterson. There was nearly a collision at first between Rivero, Petersen, and Zimmerman, but the Nationals got the out. Rivero needed just four more pitches to get two more outs – a total of five for the half-inning. In the bottom of the inning, after a Harper groundout, the Nationals again loaded the bases. But Desmond struck out swinging at a pitch almost in the dirt and Lobaton popped up to leave the bases loaded.

Rivero continued pitching in the top of the seventh. The pinch-hitter Daniel Castro hit the first pitch right into Escobar’s glove. Markakis grounded out. Then Maybin was called out looking at a 99-mph pitch,3 tossing the bat back over his head in frustration. The Braves called on the well-traveled Edwin Jackson4 for the bottom of the frame. Danny Espinosa was out on a comebacker. Werth hit a line drive caught by Garcia – who made a flying leap, landed, and rolled over the third-base line while holding onto the ball. Despite the out, the play drew applause from the crowd. Rendon struck out.

In the top of the eighth, Freeman faced Nationals set-up man Drew Storen. He had been 0-for-11 against Storen, but made that 1-for-12 with a double to right. Pierzynski didn’t move the runner as he grounded right to the shortstop. But Nick Swisher knocked Storen’s first pitch into right, scoring Freeman when Werth didn’t get the ball to the plate quickly or accurately. Petersen flied out to Werth. He threw to Zimmerman to try to double Swisher off first, but Zimmerman couldn’t hold onto the ball so Swisher was back safely. Andrelton Simmons flied out to end the half-inning with the score 2-1, Braves. The Braves’ third pitcher, Arodys Vizcaíno, walked Harper, then Zimmerman was out swinging. Robinson lined out right to Freeman at first, who fell over to touch the bag for the unassisted double play.

In the top of the ninth the Nationals’ closer, Jonathan Papelbon, faced Michael Bourn, who sent the first pitch bouncing to center. Pinch-hitter Pedro Ciriaco then bunted up the third-base line: Escobar charged in to grab it, but missed the ball – but the runner was probably safe anyway. Markakis flied out to center, but quickly enough that Harper was able to get the ball in to Desmond in time to hold the runners. Papelbon buckled down and finished the inning on only three pitches: a lineout, a fly out, and he was out of the inning.

In the bottom of the ninth Escobar hit Vizcaíno’s second pitch down the first-base line into the corner, slid into second, and started cheering to pump up the crowd. Williams sent in Trea Turner to run for Escobar (Turner stayed in to play second). On his third try, Desmond bunted Trea to third. Wilson Ramos came in as a pinch-hitter but struck out swinging at 101. Pinch-hitter Matt den Dekker, just recalled from Triple A the previous week, hit a low liner up the middle, scoring Turner to tie the game, 2-2. A Werth single advanced den Dekker to second. Fredi Gonzalez changed pitchers to side-arming Peter Moylan for a righty-righty matchup against Rendon. Rendon grounded to second for the force out, sending the game to extras.

In the top of the 10th Papelbon faced Pierzynski, with Ramos staying in to catch. Pierzynski grounded out to Zimmerman unassisted. Héctor Olivera, pinch-hitting for Vizcaíno, flied out to Turner in shallow right: He made the catch staggering backward while blowing a bubblegum bubble. Papelbon finally got Peterson on a swinging strikeout on the ninth pitch to end the half-inning. In the bottom of the 10th, Gonzalez chose Matt Marksberry to face Harper, who singled into left, reaching base for the fourth time in the game. Zimmerman then singled off the next Braves pitcher, Brandon Cunniff, sending Harper to third. Williams chose Michael A. Taylor to pinch-hit, sore knee and all. With runners in scoring position, he was batting .337 (28-for-83), with two homers and 39 RBIs.5 Williams’ confidence was rewarded: Taylor knocked Cunniff’s second pitch into the Red Porch seats beyond center field for a three-run walk-off homer. He was doused at home plate by his teammates with the 23,536 fans standing and cheering.

1 It didn’t work out. The Nationals swept the four games against the Braves, but were swept by the Mets September 7-9, and missed the postseason.

4 Atlanta was Jackson’s ninth team. By 2018, he had pitched for 13 different teams, including two stints with the Nationals.