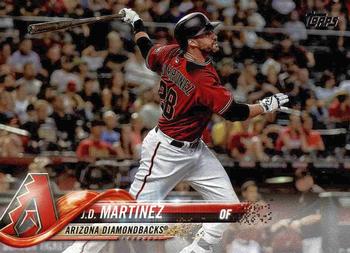 “J.D.! It stands for Just Dingers!”1 In the first game of a three-game set between the Arizona Diamondbacks and Los Angeles Dodgers, J.D. Martinez essentially just hit dingers, and the Dodgers failed to score. Martinez became the 19th major-league player to go deep four times in a game.2 Impressive as Martinez’s performance was, the slugger was not the only player with a noteworthy or interesting performance in the game.

Most baseball fans would categorize this game as a blowout: One team scored a lot of runs and the other did not. What is intriguing about this game, though, is that it did not appear to be a blowout from the beginning. The Dodgers were not standing on the field in the early innings watching the Diamondbacks round the bases as if on a merry-go-round. Further, in some ways, Los Angeles did not play a particularly sloppy game: No one made an error, and Dodgers pitching surrendered only two walks. The sloppy part of the game was the six home runs allowed, two-thirds of which came off the bat of Martinez.

Dodgers manager Dave Roberts noted after the game, “We got our butts kicked, all around.”3 Well, they did get their butts kicked, except for starter Rich Hill. This win for Arizona was the team’s 11th straight victory. By contrast, the Dodgers, who still had a sizable lead in the NL West Division, lost for the ninth time in 10 games.4 In a feeble performance, the Dodgers’ offense managed only three singles and one walk.

The game did not look so atrocious for the Dodgers at the beginning, though. Hill tossed six innings, during which he threw an efficient 87 pitches, gave up two runs, walked just one batter, and struck out nine. A classic quality start. One of Hill’s strikeout victims was Martinez in the slugger’s first at-bat, the only time that day he stepped into the batter’s box and did not hit a home run. That is not exactly what one might expect from a “blowout.”

Hill’s opponent, however, was even better. The Diamondbacks sent Robbie Ray out to the mound. He carried a perfect game into the sixth, pitched an impressive 7⅔ innings, gave up no runs, and struck out 14 batters. While the obvious headline of this game may be J.D. Martinez and his four home runs, Ray’s performance was also highly notable.

Hill came out of the game after recording the last out in the top of the sixth inning. Though he had thrown only 87 pitches, Roberts’ decision to remove him made sense given that his spot was due up third in the bottom of the inning. The score at this point was just 2-0 Diamondbacks, and Martinez had only hit one home run. Unfortunately for the Dodgers, the game began to unravel shortly after.

The sixth inning looked promising for a brief moment. A truly brief moment. Dodgers second baseman Logan Forsythe led off the inning with a single to center field, breaking up Ray’s perfect game. The right-hander bounced back by striking out the side, including Rob Segedin, who pinch-hit for Hill.

Although LA had not made any progress offensively, a 2-0 deficit is far from insurmountable in the seventh inning. Roberts sent reliever Pedro Baez out to face the middle of the Diamondbacks order in the seventh with Martinez leading off. Baez started off behind in the count against the Diamondbacks’ dangerous cleanup hitter. On the 3-and-1 pitch, Martinez launched a home run to deep right field. Home run number two.

But Arizona was not done. Up next was second baseman Brandon Drury, who also hit a home run. Baez proved unable to record an out in this appearance, giving up singles to the next two batters, Jake Lamb and Adam Rosales. Roberts brought in Edward Paredes with two on and no one out to try to stop the bleeding. Paredes got out of the inning, but not before giving up consecutive singles. Robbie Ray hit one of them and drove in two runs, just in case his performance on the mound was not enough.

The remainder of the game was a bit of a replay of what had already occurred. The Dodgers failed to score, and Martinez continued to hit home runs. Two more, to be precise. Brandon Drury and Rosales homered, as well, to round out a 13-0 romp.

As you might expect, Ray was credited with the win and Hill suffered the loss. Ray clearly deserved to be rewarded for his exemplary performance. On the other hand, Hill was not bad at all. He was probably the best of the Dodgers pitchers in the game, giving up only two hits and striking out nine. He was the only pitcher who managed to get J.D. Martinez out.

Pedro Baez, who relieved Hill in the seventh, gave up four runs and failed to record an out. Josh Fields and Wilmer Font gave up three and four runs respectively. According to Baseball-Reference’s calculations, Hill was the only Dodgers pitcher to be credited with a WPA for the game greater than zero.5 So is it fair to punish him with the “loss”? Probably not. However, he was the starting pitcher, and the team was losing when he exited the game. The scoring rule dictates that he should be debited with the loss, even though his team was losing only 2-0 at the time.

Although Martinez and Ray were the centerpieces of day, it is interesting to explore Hill’s day, as it exposes some of the faults behind the pitcher win and loss. To a nonfan of baseball, it might make intuitive sense to debit the worst pitcher of the day with the loss. In this game that pitcher was Pedro Baez, who, according the Los Angeles Times, was “booed off the mound.”6

As discussed above, Hill was not bad at all; in fact, he improved his team’s chances of winning the game, according to Baseball-Reference. Why can we give him a blemish on his record when he actually contributed to his team’s chance of winning? It seems unfair.

Questioning the pitcher win is something others have discussed, as well. Keith Law argues that it matters whether the team wins or loses and that it is ignorant to credit one person with the win or debit him for the loss. A lot of other things have happened in the game around the pitcher.7 Law employs an example more extreme than Hill in this game: In May of 1959, Harvey Haddix threw 12 perfect innings for the Milwaukee Braves, retiring 36 batters in order. His offense failed to score. A runner reached on an error and Haddix gave up a double to end the game.8

Hill obviously did not pitch a perfect game, but he pitched well. Law’s point is that the pitcher win or loss “obscures the truth.”9 That is exactly what happened here. Assigning Hill the loss obscures the fact that he pitched the best of his teammates that day.

It’s neither his fault that his offense could not score, nor his fault that Martinez kept scoring (apart from the one home run he hit off Hill). So in a game of exciting offense from the Diamondbacks and generally poor pitching from the Dodgers, it is important to step back and think about how this game will be remembered and what that tells us about one of the ways we think about pitchers.

In addition to the items cited in the Notes, the author also referred to Baseball-Reference.com, and espn.com/mlb/game?gameId=370904119

5 WPA = Win Probability Added by Pitcher. Given average teams, this is the change in probability. A change of +/- 1 would indicate one win added or lost