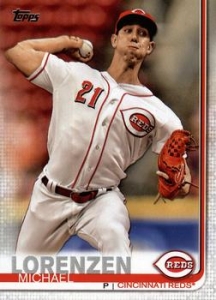 It was a beautiful night for the 13,448 fans at the Great American Ball Park. At game time it was 84 degrees with some sunlight still lighting left field. The Reds were well out of playoff contention at 64-75, 14½ games back of St. Louis in the NL Central. However, the fans who showed up and stayed to the end not only cheered their team to a win, they witnessed something that hadn’t happened in 98 years. The visiting Phillies were still in the wild-card hunt at 72-65, but 12½ games back of Atlanta in the NL East.

Trevor Bauer (10-12, 4.53 ERA) took the mound for the Reds. Those were reasonable numbers, but his numbers for the month in Cincinnati since coming from the Indians were not impressive: 1-4 with an 8.40 ERA. His first inning went well enough: Corey Dickerson popped out, J.T. Realmuto flied out. Although Bauer walked Bryce Harper on four pitches, Rhys Hoskins grounded into a force out at second.

Aaron Nola (12-4, 3.45), the ace of the Phillies pitching staff, struck out Josh VanMeter to start the bottom of the first. Joey Votto had faced Nola 15 times and had yet to record a hit. He remedied that situation by homering into the left-field bleachers. Nola struck out Aristides Aquino and walked Tucker Barnhart, but Freddy Galvis struck out on a not-quite-checked swing to end the inning with the Reds leading 1-0.

Although Bauer allowed a single to Jean Segura in the top of the second, he was erased when César Hernández grounded into a double play to end the half-inning.

Nola ran into trouble in the bottom of the second. After Phillip Ervin struck out, Brian O’Grady hit his first major-league extra-base hit — a triple off the wall in center. Bauer walked on five pitches. Although Alex Blandino struck out, the Reds scored four two-out runs with a single and two doubles. Nola got the final out on Barnhart’s groundout, but the Reds had a 5-0 lead. Nola’s pitch count was already at 52 after two innings.

The only baserunner in the top of the third was Nola, who doubled (only his 16th career hit, but his fourth double). His time on the basepaths didn’t hurt his pitching: He got three quick outs on 12 pitches in the bottom of the frame.

In the top of the fourth, Harper walked again, but was left at first when Hoskins and Segura struck out and Scott Kingery flied out to left. The bottom of the frame was similar: Bauer struck out,1 Blandino walked, but VanMeter grounded into a double play.

Bauer had his difficult inning in the top of the fifth. Hernández opened with a double. After Adam Haseley struck out, pinch-hitter Logan Morrison2 homered well over the right-field wall to put the Phillies on the board. Dickerson singled but had to come out of the game immediately:3 He made it to first but Brad Miller ran for him. Realmuto followed with another two-run homer, pulling the Phillies within one run. Bauer got the last two outs thanks to some impressive fielding by O’Grady in center, but the score was now 5-4, Reds.

Cole Irvin took over the pitching for the Phillies in the bottom of the fifth. He was on his fifth call-up this year for the Phillies, having played in 17 minor-league games and eight major-league games. He certainly impressed in this outing: He needed only five pitches for two groundouts and a strikeout.

Considering Bauer’s difficulties in the fifth, it was no surprise that Reds manager David Bell brought in reliever Robert Stephenson for the top of the sixth. Segura grounded out, Kingery flied out. Stephenson got out of the inning when Hernández bounced one up the middle: Stephenson deflected the ball but Galvis corralled it and got the throw to first in time. Irvin got the first two outs in the bottom of the sixth, but when he allowed a single to O’Grady, Jared Hughes came in to face Derek Dietrich. Dietrich grounded out.

The Reds’ third pitcher, Michael Lorenzen, got the first out of the seventh unassisted: Haseley bounced one toward the mound so Lorenzen grabbed the ball and tagged him out in the baseline. Jay Bruce homered into the batter’s eye to tie the game. Lorenzen got the next two outs without allowing any further damage but the game was tied, 5-5.

The Reds untied the game in the bottom of the seventh. With José Álvarez pitching, after Blandino grounded out, VanMeter hit his first pinch-hit home run (incidentally, the third pinch-hit home run in the game4). After Votto singled off Álvarez, Phillies manager Gabe Kapler called on Blake Parker as the next pitcher. (Without checking the date, you could tell this was a September game with expanded rosters, given the five pinch-hitters and eight pitcher substitutions.) Aquino grounded toward third for a force out at second base. With Barnhart batting, Aquino stole second. Kapler challenged the “safe” call at second, but the call on the field was upheld: Aquino managed to keep some part of his body in contact with the base at all times. Barnhart popped up to end the inning with the score 6-5, Reds.

Lorenzen stayed in to pitch the top of the eighth. Harper flied out, Hoskins grounded out. Segura split his lip when he fouled a ball off his face but stayed in the game.5 He popped up to the shortstop to end the inning with the score still 6-5, Reds.

Parker also stayed in to pitch the eighth. Galvis made a bid for a homer to center but Haseley climbed the wall to rob him, reaching into the stands and tearing the wall covering with his spikes in the process. Ervin walked and O’Grady struck out looking. Perhaps Parker wasn’t pitching too carefully to the opposing pitcher, but Lorenzen hit his seventh career home run, several rows into the seats: 8-5, Reds. Nick Pivetta, the next pitcher, hit Blandino, but he was left at first when José Iglesias grounded out.

Given the score, Bell summoned Reds closer Raisel Iglesias for the ninth. He sent Lorenzen out to play center field. Iglesias secured the win with a strikeout and two fly outs. Once Lorenzen was officially credited with the win, he achieved a combination that hadn’t occurred since June 13, 1921, when Babe Ruth was credited with a win, homered, and played the outfield in the same game.6

The loss pushed the Phillies further back in the standings. Both teams finished fourth in their respective divisions, 16 games back of the division winners.

1 Having spent his career until August 2019 with the Indians, Bauer had limited hitting opportunities. He did have three career hits, all singles.

2 Morrison had had success against Bauer in his career, although in a relatively small sample size: He was 6-for-20 including two doubles and a homer.

3 His foot was sore from fouling a ball off his foot in the third. Todd Zolecki, “Dickerson Exits with Sore Foot; X-Rays Negative,” mlb.com, September 4, 2019, mlb.com/news/corey-dickerson-exits-game-with-foot-injury. Accessed February 2, 2020.

4 This was only the seventh game with three pinch-hit home runs. Oddly enough, the Phillies played in three of the seven games. baseball-reference.com/play-index/tiny.fcgi?id=xar57.

5 Segura was wearing the batting helmet with the additional face protection, which absorbed some of the impact.