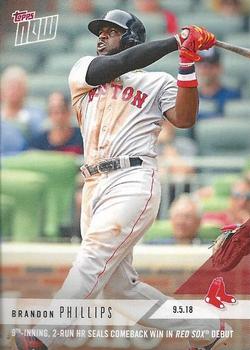 It was a team effort. It took 21 Red Sox players to win the game but win it they did. This was win number 97 of the 2018 season, when Boston set a franchise record with 119 wins, 108 of them in the regular season, and won the World Series, their fourth world championship of the twenty-first century.

Looking at the starting lineup the Red Sox had put forth, manager Alex Cora had to defend himself against a raft of accusations from fans that he was giving the game away by playing his “junior varsity.”1 Cora was assertive about giving days off to regulars, even in a clash of first-place teams. Boston had a comfortable 8½-game lead in the standings, but the schedule-maker had dealt them a challenging week, with series against the NL East-leading Braves and the AL West-leading Astros. Among those not starting in this day’s game were Mookie Betts, Xander Bogaerts, and J. D. Martinez.

The Braves were in a close race, just three games ahead of the Philadelphia Phillies after losing the first two games of the three-game set to Boston.

It was a game that, as it unfolded, Red Sox had seemed sure to lose. After seven innings, they were down, 7-1.

It was an early afternoon game in the Braves’ second season at SunTrust Park, starting just after noon on a Wednesday. It still drew very well — 28,386 were in attendance.

The Braves started right-hander Mike Foltynewicz. It was his fifth season in the majors, and he was on his way to a 13-10 record. Opponents were batting just .205 against him before this game. He got the Red Sox on three fly-ball outs in the top of the first. Braves manager Brian Snitker was probably pleased.

Alex Cora started Hector Velazquez. The right-hander from Mexico was in his second season with the Red Sox, building toward a 7-2 final mark. That was his record entering this game; he was making his 40th appearance of the season. He ended the year with a 3.18 ERA. On this day, he gave up two runs in the first inning.

The first three Braves to bat were the three outfielders. On the second pitch of the game, Velazquez gave up a home run to left fielder Ronald Acuña Jr., hit to deep left-center. Center fielder Ender Inciarte then tripled to right. The Braves’ third outfielder — Nick Markakis, playing right field — singled to right, scoring Inciarte. Another single followed, but Velazquez got a double play and groundout and the score got no worse for Boston than 2-0.

The Red Sox got one run back in the top of the second. Second baseman Brandon Phillips walked and Rafael Devers (playing third base) singled to center, with Phillips running to third. Shortstop Brock Holt hit a ball softly to first base and Phillips scored.

There was no more scoring until midgame. It remained a one-run game. Velazquez left for a pinch-hitter in the top of the fifth. Drew Pomeranz relieved. He was treated unkindly.

The Braves, who would also use 21 players in the game, began to substitute. Kurt Suzuki pinch-hit for Lucas Duda. He grounded into a force at second, but Inciarte scored and Suzuki picked up an RBI. Ryan Flaherty ran for Suzuki. On a 2-and-0 count, second baseman Ozzie Albies tripled, the ball rolling to the fence in right-center, and both baserunners scored.

William Cuevas replaced Pomeranz. Braves catcher Tyler Flowers singled, scoring Albies with the fifth run of the inning. After walking the next batter, Cuevas struck out the two who followed, but the Braves now held a 7-1 lead.

So the score stood until the eighth inning. The Red Sox had been retired in order in both the sixth, by Foltynewicz (who departed the game after giving up just one run in six innings), and the seventh, by Jesse Biddle. Biddle had been pinch-hit for in the bottom of the seventh, so the Red Sox faced Dan Winkler in the eighth. Looking at Winkler’s stats for 2018, he had a pretty good year — he was 4-0 with a 3.43 ERA in 69 games. But this proved to be his worst outing of the season.2

On an 0-and-1 count, catcher Christian Vasquez singled.

On an 0-and-1 count, shortstop Tzu-Wei Lin singled.

On an 0-and-1 count, center fielder Jackie Bradley Jr. singled. The bases were loaded and there was nobody out. Still, the Braves had a six-run lead.

Right fielder Blake Swihart waited for four pitches and then saw one he liked. He doubled to right-center field, driving in two runs, cutting Atlanta’s lead to 7-3.

Braves skipper Snitker called on Jonny Venters to replace Winkler, who had given up hits to each of the four batters he faced. Winkler said after the game that he felt he had made really good pitches, adding, “Another reason I was visibly upset is became (Boston) is a really good ballclub, and when you have a six-run lead you want to lock it up. That’s our job … and we didn’t do it today.”3

Steve Pearce pinch-hit for first baseman Mitch Moreland, and lined out to left field, but Swihart tagged and scored. 7-5.

Phillips grounded to third but reached on a throwing error. The bases were loaded, and each manager made a move. After Cora inserted Ian Kinsler to pinch-hit for Devers, Snitker called on Brad Brach (who had an ERA of 0.59 at the time) to relieve Venters.

Kinsler singled to left field. Benintendi scored. Phillips came home with the tying run, as the throw to the plate was just a bit off the mark.

Pinch-hitter Eduardo Núñez flied out to center. Vasquez collected his second single of the inning, to center field. Now with two on and one out, Snitker and his staff orchestrated five defensive moves, bidding to preserve the tie:

Then it was Cora’s turn to reorganize the Red Sox defense for the bottom of the eighth:

Workman retired the first two batters of the inning, but Freeman homered, giving the Braves the lead again, 8-7.

But the Red Sox had not run out of rallies. A home-run ball tipped the scales the other way in the top of the ninth. With two outs and Benintendi on first base, Minter faced Brandon Phillips — playing in his first major-league game in almost a full year (he had last played, for the Dodgers, on September 30, 2017).4 On the first pitch, Phillips homered five or six rows into the seats in left field. It was now 9-8, Red Sox.

Red Sox closer Craig Kimbrel got two outs, walked Flowers, and then struck out Lan Adams to seal the win. It was Workman who got the “W,” his record improving to 4-0.

Peter Abraham of the Boston Globe called it “the most exciting victory in a spectacular season.”5

Phillips, in the 118th year of the franchise, was reported as “the first player in Red Sox history to hit a go-ahead homer in the ninth inning or later in his debut with the team.”6

Minter said, postgame, “I missed by an inch with the pitch and he made me pay.”7 He added, “That game stunk. We all know that. It definitely did. But we can’t feel sorry for ourselves. We’re going to come back, keep grinding.”8

Snitker, acknowledging Cora’s lineup management, said, “They’re too deep; they’re too patient; they’re professional hitters, just all the way through. I mean, they played a bench game, and those guys, the majority of them could start on a lot of major-league teams.”9

The Red Sox picked up a game on the second-place Yankees, now with a 9½-game margin. The Braves remained three games ahead of the Phillies. They were on their way to a 90-72 season, winning first place in the National League East. They were beaten in the Division Series by the Dodgers, the team that succumbed to the Red Sox in the 2018 World Series.

In addition to the sources cited in the Notes, the author consulted Baseball-Reference.com, Retroheet.org, and the telecast of the game presented on YouTube.com. Thanks to Tom Hufford, and to John Hill for supplying the Atlanta Journal-Constitution game story.

1 Nick Cafardo, “Hard to Argue with Cora’s Bottom Line,” Boston Globe, September 6, 2018: C3. Cora defended himself, saying, “I think the guys that we’re playing are good players and at the same time we’re going to benefit from having two off days for the other guys.” See Peter Abraham, “Cora Enjoys Last Laugh,” Boston Globe, September 6, 1918: C2.

2 There was another game in which he gave up four runs — all earned — back on June 22, but at least he recorded one out in that game.

4 Phillips had sat out the first half of the year, signing a minor-league deal with the Red Sox in late June and playing at Triple-A Pawtucket before being called up on September 4. He was the first Red Sox player to wear the number “0” on his uniform.