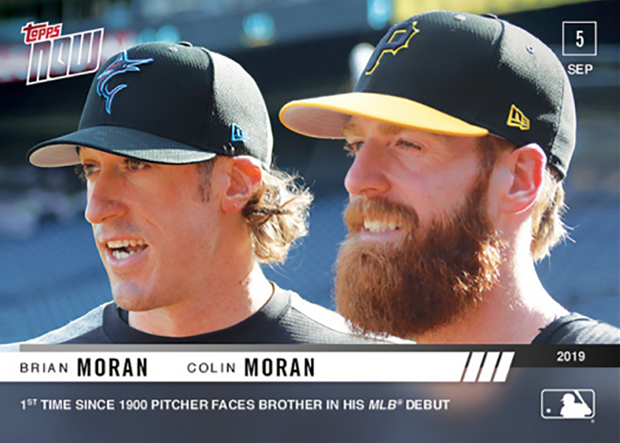 If you were to look at the box score you’d know it was September without checking the date. There were 36 players in this game, with the managers taking full advantage of the September 1 roster expansion. Neither the Pirates (61-78) nor the Marlins (49-89) had any postseason hopes. Both were dead last in their respective divisions. But the 9,642 stalwart fans who showed up for this game witnessed something that hadn’t happened before: A pitcher making his major-league debut struck out his brother.1

Dario Agrazal (4-3, 4.50 ERA) allowed the first two batters of the game to reach base: Jon Berti singled, then he brushed Starlin Castro with a pitch. After Garrett Cooper flied out, Neil Walker came to the plate cheered by the Pittsburgh fans who remembered his years with the Pirates.2 They may have regretted the cheering when he singled, scoring Berti. Castro made it to third on a Jorge Alfaro fly out. With Isan Díaz batting, Walker stole second (only his third steal of the season), but Díaz looked at strike three to leave two men in scoring position with the Marlins leading 1-0.

To say Elieser Hernández (3-5, 5.06) had a difficult bottom of the first would be an understatement. Kevin Newman’s soft comebacker bounced off Hernández’s leg. (Newman reached base and Hernández was uninjured.) Bryan Reynolds hit the next pitch 424 feet: It landed between the A and T hedges spelling out PIRATES in the batter’s eye, giving the Pirates a 2-1 lead. Colin Moran hit a ground-rule double down the right-field line. (The ball bounced over the low wall after hitting the chalk line.) Josh Bell singled into right, moving Moran to third. Melky Cabrera popped out for the first out, too shallow for Moran to score. That situation didn’t last long: Pablo Reyes doubled to left, scoring Moran, but the throw in to the plate was in time to catch Bell for the second out. Adam Frazier walked and Elias Díaz was hit by a pitch to load the bases for Agrazal. This was his 11th game and he had yet to reach base. He remedied that with a slow roller into right — which would have been an out if second baseman Díaz hadn’t thrown the ball into the dugout for a two-base error: 5-1, Marlins. Newman, batting for the second time in the inning, flied out.

Harold Ramírez opened the second with a solo home run into the bleachers. Magneuris Sierra singled and eventually made it to third, but was left there after three groundouts with the score 5-2, Pirates.

Hernández had a much easier second inning. All he allowed was another double to Moran: This time it rolled to the fence rather than bouncing over the wall.

In the bottom of the third with two outs, Agrazal finally got his first major-league hit.3 He was left at first when Newman struck out swinging.

All Agrazal allowed in the top of the fourth was a walk to Sierra, although the third out was a bit of a challenge. Pinch-hitter Curtis Granderson’s foul pop was caught by Pirates catcher Díaz on the top step of the third-base dugout while Diaz narrowly avoided falling down the steps.

As far as baseball history is concerned, the main event was the bottom of the fourth. Brian Moran, a lefty side-armer, made his major-league debut with friends and family cheering him on. Reynolds was his first out: a grounder to short. Red-bearded Colin Moran smiled as he came to the plate to face his clean-shaven brother. He took a couple of balls off the outside corner and fouled off a couple to get to a full count. The sixth pitch hit the corner for a called strike, and Brian Moran had struck out his brother for his first major-league strikeout. Colin looked back and smiled as he headed for the dugout. Although Brian did hit Bell with a pitch, he got Cabrera to fly out to right to end his inning with a 0.00 ERA.4

According to the between-innings interview with their parents, Bill and Diane Moran, the intense competitiveness between the brothers went back to their back yard (although Diane’s recollection was that Brian got the best of Colin more often than not). They had family role models: Their uncles B.J. Surhoff and Rich Surhoff had been major leaguers.

Agrazal had his bad inning in the fifth. Berti doubled off the top of first baseman Bell’s glove. Castro walked. A mound visit from pitching coach Ray Searage did not help: Cooper also singled off Bell’s glove, loading the bases. The first out was a force out at second on Walker’s RBI grounder. Alfaro hit a comebacker: Agrazal looked at second (no one covering), then at third (no play there), then threw to first. (Alfaro beat the throw.) One run scored, bases still loaded. Isan Díaz’s two-RBI single tied the game. New pitcher Michael Feliz faced Ramírez. He singled: Alfaro was safe at home after a collision with catcher Elias Díaz. The ball had a lot of topspin, taking a weird bounce down the left-field line. The throw home beat Alfaro, but Díaz couldn’t hold the ball when Alfaro’s head hit his knee. Alfaro, stunned but okay, flat in the dirt, reached back to touch home plate, giving the Marlins a 6-5 lead. When Sierra swung at strike three, Díaz threw to second trying to catch Ramirez stealing. He didn’t, but the return throw was in time to catch Isan Díaz trying to score. With the lead change, Brian Moran was the pitcher of record for his first win if the official scorer chose to credit him, since the starter didn’t last five innings.

Jeff Brigham pitched a one-two-three bottom of the fifth for the Marlins.

The Marlins added to their lead in the sixth. Geoff Hartlieb allowed a double, a walk, and a single to load the bases without recording an out. He walked in a run before being replaced by Yacksel Ríos. Walker batted with the bases loaded for the second time with the same result: a run-scoring grounder on a force out at second. Alfaro grounded into his second double play to end the inning, but the Marlins had an 8-5 lead.

It looked promising for the Pirates in the bottom of the sixth when José Quijada allowed a single to Jacob Stallings followed by Newman reaching on an error. But Quijada buckled down and struck out the next three batters to end the threat.

The Pirates’ fifth pitcher, Parker Markel, struck out Isan Díaz to open the seventh. He walked Ramírez, who was thrown out at third trying to advance on Sierra’s single. Pinch-hitter Martín Prado struck out. Ryne Stanek pitched a one-two-three bottom of the seventh.

Markel continued pitching in the eighth. Berti reached on a strikeout-wild pitch. A Castro single, a Cooper groundout, and an intentional walk to Walker loaded the bases for Alfaro. This time, his groundball snuck through into center field, scoring two: 10-5, Marlins. Isan Díaz singled to right, but the throw to the plate was in time to beat Walker for the second out. Ramírez lined out for the third out. The Marlins sixth pitcher, Tyler Kinley, worked a one-two-three bottom of the eighth.

All the Marlins got in the top of the ninth was Sierra’s single. In the bottom of the ninth, Reynolds and Bell both hit solo homers off Jarlin García5 to bring the score to the final 10-7, Marlins. This was Reynolds’ first multi-homer game.

Brian Moran joined his teammates on the field for the postgame celebration as his family stood and cheered. He was credited with the win.

The author consulted Baseball-Reference.com and Retrosheet.org, and viewed the recorded game at MLB.com.

3 Yes, the ball was thrown into the dugout for authentication.

4 That did not hold for the season: He appeared in relief in 10 games and finished with a 4.26 ERA, mostly due to the two runs he allowed in his last outing, on September 29.