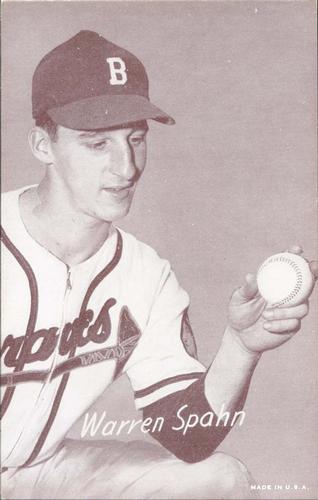 As dawn turned to noon on this Labor Day, Boston fans reveled in the success of both major-league entries. The Red Sox led the Yankees by half a game, with the Cleveland Indians lurking 3½ games back.The Braves clung to a 2½-game lead over St. Louis and Brooklyn, but only a single game in the loss column over the Cards, Bums, and Pirates. Even the New York Giants were within hailing distance – four back in the loss column, with 19 out of their remaining 25 games at home to finish the season. Although they led, the Braves’ September schedule was daunting– 17 of the remaining 24 games were against these four teams, including 14 home games.

The Braves sent Warren Spahn to the mound for the first game, and announced Johnny Sain for the nightcap – the third time the aces were to pitch on the same day this season. The Dodgers countered with 22-year-old Ralph Branca – a 21-game winner the previous year – in the first game, in front of the holiday crowd of 39,670 (second highest of the regular season).

Boston scored early, as Tommy Holmes led off the Braves end of the first with a single, moved to third on Mike McCormick’s double, and scored on a liner to right by cleanup hitter Bob Elliott. The Dodgers evened the score in their next at-bat, as Carl Furillo doubled to deep center and scored on a Roy Campanella single to left.

The early scoring then gave way to an extended pitching duel, with both pitchers trading goose eggs over the next seven innings. Branca worked in and out of several jams over his nine-plus innings of work as Braves reached third base on a trio of occasions – Al Dark (three hits in each game, extending his hit streak to 14 games) twice – in the third and fifth, and Holmes near the end of Branca’s stint on a wild pitch in the 10th inning. Branca also benefited from two Dodgers double plays during his effort.

Spahn cruised through the middle innings, retiring the side in order in the third, fourth, sixth, eighth, and ninth innings, although Bruce Edwards and Furillo taxed him in the fourth with 10- and eight-pitch at-bats, respectively. The lefty scattered five hits and four walks and never allowed more than a single baserunner at a time after the second inning. He rose to the occasion in the ninth, falling behind by 3-and-1 counts to Pee Wee Reese and Edwards (both righties), and recovering to fan both.

A number of key plays, worthy of 20-20 hindsight, dotted the middle innings. Al Dark’s fifth inning one-out triple went for naught as Mike McCormick’s grounder to shortstop was not enough to score him from third. In the seventh Furillo doubled with one out, but was then caught in a rundown as Spahn nabbed Gil Hodges’ grounder and threw to second sacker Sibby Sisti, who made an excellent stretch grab and then ran down Furillo for the second out.

The deadlock rolled into extra innings, where much of the game’s excitement took place The Braves loaded the bases in the 10th with one out on two singles (Holmes and Dark) and a walk, (Mike McCormick), chasing Branca for Rex Barney, who retired Elliott, and then Joe Hatten, who bested Clint Conatser (pinch-hitting for Jeff Heath) on popups. Jackie Robinson singled with two out in the 11th, but Spahn promptly picked him off first to end the inning.

The home team threatened again in the 12th as Spahn reached first when left fielder Bruce Edwards muffed a fly ball after an extended chase, and moved to second on Tommy Holmes’s bunt. The Dodgers walked Dark on purpose. Mike McCormick followed with a line single to left, but Edwards atoned by throwing Spahn out at home by a good seven feet. Should Billy Southworth have pinch-run for Spahn, who had thrown 150-some pitches? Or, absent a pinch-runner, should he have sent Spahn at all with a strong-armed catcher – albeit struggling outfielder – fielding and throwing from left? Southworth explained to the Boston Globe’s Jack Barry that he liked Spahn’s chances against Edwards’ relatively weak arm and that he’d “do it again.’ Dark and McCormick advanced to third and second on the throw home, but Conatser flied out (after another intentional walk) to end the threat.

The Braves loaded the bases again in the 13th on Earl Torgeson’s single, Phil Masi’s fielder’s choice (safe at first on a sacrifice bunt), and Sibby Sisti’s single.That brought Warren Spahn to the plate. Spahn had delivered over 160 pitches at the time but manager Southworth chose to ask him to execute a safety squeeze bunt, instead of pinch-hitting for him. But Hatten was able to field the bunt cleanly, force Torgeson at home plate, and nail Spahn at first, covered by second baseman Jackie Robinson.Boston Herald beat reporter Will Cloney wrote of “‘drugstore managers’ who thought Torgeson should have been off with the pitch, i.e., a suicide squeeze.” With a possibly overworked pitcher at bat?

The Dodgers continued to work to manufacture a run in the top of the 14th, as Billy Cox walked, and Robinson replaced him at first on a forceout. However, Spahn caught him leaning the wrong way, and picked him off AGAIN, and then Reese popped up, ending the inning.

In their half of the 14th, the Braves finally broke through, as Conatser coaxed a two-out walk and scored on Torgeson’s double to center, making Spahn a tired (177 pitches, two pickoffs) winner, and Branca a hard-luck loser.

Arguably, the day was a major turning point in the NL pennant race. The Braves won the nightcap, with Sain’s five-hit, 4-0 shutout winning the second game. They stood with a four-game lead by Monday night, although the Pirates remained only a single game back in the loss column. (The Dodgers and Cards were both three back.)Spahn and Sain duplicated their Labor Day success in another doubleheader (after two off days and then two rainouts) later in the week, and the Braves won 15 of the final 20 over the rest of the season, turning a one-game (loss column) lead into a seven-game advantage by the end of the regular schedule.

Arthur Daley of the New York Times, ruminating on the prospects of an all-Boston World Series, proclaimed the Red Sox the most formidable team in the junior circuit. He wrote, “The Red Sox have been winning so consistently that they seem to defy the law of averages,” and that “the fat cats of the National League would seem to be the Boston Braves,” acknowledging a schedule with several off days over the rest of the regular season.1

The off days and postponements that followed led Southworth, on September 13, to outline his pitching plans for the next couple of weeks, largely riding on the left and right arms of his two best pitchers. His comments led Boston Post reporter Gerald Hern to pen the famous line “Spahn & Sain and followed we hope by two days of rain” in the September 14 edition. Thanks to several scheduled off days, each of the aces continued their intense workload during the month – Spahn started seven games (winning four) and Sain eight (winning seven). Moreover, each started the October 2 doubleheader – one day before the end of regular season – even though the Braves had clinched the flag and had a 5½-game game lead. Workhorses, indeed!

Sources consulted for this article were Baseball-Reference.com and the September 7, 1948, editions of the Boston Globe, Boston Herald, and Boston Post.