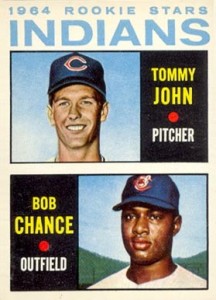 Much of the off-field enjoyment of baseball is connected to the contemplation of its many and varied statistics. Literally everything that occurs on the baseball field during a game can be counted; the batters’ credits and the pitchers’ debits accumulate. The result is a mountain of statistical data for players and fans alike to ponder, pore over, speculate about, and wonder about long after the game has ended.

The essential unit of this statistical mountain is the individual game itself – without a game between two teams, no data can be generated, and therefore no statistics can later be pondered. And while each game is significant in its own way, some are more significant than others.

Consider the game between the Senators and Indians on Friday, September 6, 1963.1 An otherwise humdrum affair featuring the sixth-place Indians and the last-place Senators, both playing out the September schedule string, the game took on a new veneer of importance as the major leagues’ 100,000th game.

As noted in The Bleacher Creature:

“A Hall of Fame committee, after researching the issue, determined that the 100,000th game would be played on September 6, 1963 at either New York, Philadelphia or Washington.

As it turned out, the Senators had a pre-game attraction scheduled for that date, a two-inning contest for charity between a team of Hollywood stars led by Jerry Lewis and a team of local press and TV personalities. The pre-game fun delayed the start of the game which caused the game between the Senators and Indians to be baseball’s 100,000th.”2

Now this was something! As a major-league baseball historical milestone, now the game took on new meaning.

There were 12,054 fans on hand to see this historic event. Yet, in spite of its import, the celebration of this milestone was somewhat muted. As one account put it: “The only ceremony in connection with the 100,000th game came when pitcher Bennie Daniels, Washington starter, tossed the first ball to Cleveland’s lead-off hitter Dick Howser. With a one-strike count on Howser, the park loudspeaker announced that the ball used on the first pitch was being taken out of play to be presented to the Hall of Fame.”

The game itself saw the Senators, trailing 2-1 in the bottom of the sixth inning, erupt for four runs to take a 5-2 lead. Lock then hit a solo home run in the bottom of the seventh to essentially put the game out of reach, securing pitcher Bennie Daniels’ complete-game win. Daniels scattered five hits and surrendered two runs to the Indians. Additionally, he hit a double to drive in a run during the Senators’ four-run sixth inning –all in all a very good day’s work for the right-hander.

Three historically significant figures in baseball also made appearances in this game: Minnie Minoso, Don Zimmer, and Tommy John. Minoso, a seven-time All-Star, who was near the end of a long career that had seen him become one of the game’s great Latin stars, had a hit and run batted in. Zimmer, a journeyman infielder who later became a respected coach and manager and spent over 60 years in the game, had two hits, made two errors, and started two double plays. And John, who memorably pioneered and gave his name to surgery that has saved many pitchers’ careers, made his major-league debut, pitching in the seventh inning and surrendering two hits and a run.

As a final historical note, major-league baseball’s original Cleveland franchise played in the very first major-league game: “On May 4, 1871, 200 people gathered in Fort Wayne, Indiana watched their hometown Kekiongas baseball team defeat the Forest Citys from Cleveland. This was the first game played in the new National Association, and was considered the first Major League baseball game by historians.”4

Cleveland lost that game, too.