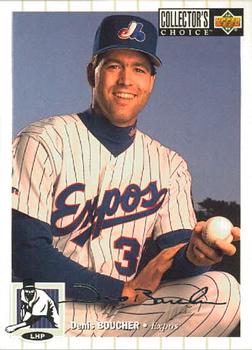 Monday, September 6, 1993, was Labor Day in Canada and the United States. The Expos were at home, and for the first time since Opening Day more than 40,000 patrons (40,066) had spun through Montreal’s Olympic Stadium turnstiles anxious to take in the game. It was the last month of the season and the red-hot Expos were still in the hunt for the National League East Division title. The holiday could easily have been called “Canada’s Day” in Montreal because for the first time in baseball history, a Canada-based major-league franchise had listed three Canadian-born players in the starting lineup.1

Anchoring the trio was right fielder Larry Walker from Maple Ridge, British Columbia, already a core member of the club. Joe Siddall of Windsor, Ontario, called up in July from the Ottawa Lynx, Montreal’s Triple-A International League farm club, was behind the plate. But the starting pitcher was the game’s star attraction: Denis Boucher, a local lad from Lachine, Quebec, was the first Quebec-born pitcher to start a game for the Expos, and the second to pitch for the team since Claude Raymond (1969-1971). It would also be the first time since 1883, when pitcher Tip O’Neill threw to catcher John Humphries for the New York Gothams, that any major-league team fielded an all-Canadian battery.

The Olympic Stadium crowd was hoping for a couple of outcomes. To begin with, the fans expected the team to win, as it had been doing all year with remarkable consistency. The 1993 Expos were among the best of all Expos clubs: They completed the season with 94 victories, second only to the 95 wins garnered by the 1979 team.

But more than delighting in how the team was faring, the gathered multitudes were there to cheer on Boucher, who had been acquired by Montreal from San Diego the previous July 10 in a minor-league deal that made him very happy. When first told he had been traded to Montreal, Boucher said, “I had tears running down my cheeks. I was so happy to be coming home.”2

Boucher faced the expansion Colorado Rockies, a team still struggling through its inaugural season. When the Expos took the field in the top of the first, stadium announcer Richard Morency reeled off the name and position of each player to polite applause. When it came time to announce the pitcher, he roared, “And now pitching for the Expos, [from] Lachine, Quebec…” Boucher’s name could barely be heard over the standing ovation the fans gave him.

Quebecers have a long history of revering their sports heroes, and saw any success of a Francophone athlete as reflecting positively on themselves. Hockey has always been the unofficial Quebec state religion and players like Maurice Richard, Jean Beliveau, and Guy Lafleur are the deities. But to see one of their own succeed in an American sport, playing for their team in their city, that was a special treat.

If Boucher was nervous going into the game, he didn’t show it, as both he and Rockies pitcher Kent Bottenfield (a former Expo) each delivered a three-up-three-down first inning. The Expos opened the scoring in the bottom of the second on back-to-back homers by Walker and Sean Berry to give Montreal a 2-0 lead. The Rockies’ Andres Galarraga cut that lead in half in the fourth with a two-out solo home run of his own.

Boucher and Bottenfield battled through the sixth, after which both pitchers left the game with the score still 2-1 for Montreal. When the fans realized Boucher’s night was over, they began cheering, and wouldn’t stop until Boucher came out for a curtain call, which happened only because his teammates had to virtually throw him out of the dugout onto the field to acknowledge the tribute.

“It is very difficult to do what he did today,” said Expos manager Felipe Alou after the game. “He was pitching in front of fans who wished him well, and it’s very hard to overcome the kind of pressure that can create. Nevertheless, not only did he not give in, but he showed he was not afraid, and this is the kind of man we want with us.”3

Mel Rojas took the mound for Montreal in the seventh. Rojas, normally a dependable set-up man, gave up a one-out double to Roberto Mejia, who then took third on a wild pitch and came home on a Daryl Boston groundout, tying the score and preventing Boucher from getting the win. The Rockies went ahead 3-2 in the eighth on a Dante Bichette home run off reliever Tim Scott, quieting the crowd and sending more than a few disappointed souls home. But the Expos still had two turns at the plate, and that gave Siddall the chance to show his mettle.

Randy Ready led off the bottom of the eighth with a walk, igniting new life up in the grandstand. Siddall followed and after failing on two bunt attempts, he got his pitch and hammered the ball deep on a line to center for a double, driving Ready home, which tied the score and sent the fans into a frenzy. Siddall took third on a Tim Spehr sacrifice bunt, then was lifted for pinch-runner John Vander Wal.

“I could see what Felipe was thinking,” Siddall told baseball historian Jim Shearon. “If it’s a sacrifice fly, on a close play, Vander Wal has a little more speed than I have.”4 As it turned out, Marquis Grissom, the next batter, singled and Vander Wal simply jogged home with what turned out to be the winning run.

Going into the ninth inning, manager Alou turned as usual to his closer, John Wetteland, to preserve the lead. Wetteland was coming into his own as one of the game’s most dominant shutdown men and the confident way he wrapped up this game–two strikeouts and a lazy fly ball to right–proved it.

All in all, it was a good day for Montreal’s Canadians. Boucher stayed out of serious trouble, allowing only six hits and one run, and collecting three strikeouts while surrendering no walks over six innings. Siddall handled his duties behind the plate with assurance, and helped to produce two runs. And once again Larry Walker was the catalyst, getting things going with his 18th home run of the campaign.

Boucher had a successful September, winning three games and losing only one, but after he surrendered the decisive run in an extra-inning loss at Houston on Opening Day in 1994, his stock plummeted. By the end of May, he was back to Ottawa, never to see the major leagues again.

Joe Siddall got into 19 games in 1993 but was left off the ’94 Expos roster. Briefly called up in 1995, he later touched down with the Marlins and the Tigers before returning to the minors. In 2014, he joined the Toronto Blue Jays radio/TV broadcast team.

Larry Walker continued to grow as a ballplayer through 1994. He was eligible for free agency after that strike-truncated season, and given the stoppage’s crippling financial impact, the Expos let him move on to Colorado in 1995, where he developed into a superstar.

1 It would appear that never before in major-league history had three or more Canadian players appeared in the starting lineup of a regular league game. This rarity would not be repeated until April 25, 2015, when the Toronto Blue Jays met the Tampa Bay Rays in St. Petersburg. That evening the Jays started youngsters Michael Saunders (Victoria, British Columbia) and Dalton Pompey (Mississauga, Ontario) in the outfield and the Toronto-born, Montreal-raised veteran catcher Russell Martin behind the plate. The Jays lost, 4-2.