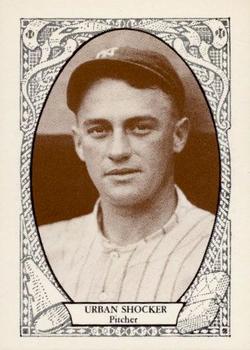 In the years leading up to the First World War, baseball − not hockey − was Canada’s national sport.1 Inconsistent winter weather in many parts of the country, coupled with a lack of indoor ice, hampered hockey’s early development. The National Hockey League didn’t even exist until late in 1917.2 Baseball, on the other hand, was flourishing north of the border. In the summer of 1914, there were 19 Canadian-based teams split across five minor-league circuits.3 Two of those leagues, the Canadian League and the Western Canada League, were made up almost entirely of Canadian-based teams.4

The first version of the Canadian League, which featured American professionals such as Fred Goldsmith, was formed in 1876.5 Although three other professional leagues operated under that name between 1885 and 1905, the most successful iteration of the Canadian League was established as a six-team Class D circuit in 1911. The league expanded to eight teams with the addition of the Ottawa and Peterborough clubs in 1912, and by 1914 it had progressed to Class B, the third-highest minor-league classification at the time.

The Ottawa Senators baseball club quickly established itself as the most successful franchise in the Canadian League, winning the league championship in each of its first two years and drawing up to 7,000 fans to big games.6 The team’s quest for a third consecutive title hit a snag in the middle of July 1914 when a slumping Ottawa team fell 10 games out of first place. Frank “Shag” Shaughnessy, the Senators’ president and player-manager, had a solution. He addressed the team’s glaring weakness by acquiring 19-year-old shortstop Jack “Johnny” Mitchell from the Adrian Fencevilles of the Class C Southern Michigan Association for the princely sum of $1,000.7 The purchase price for Mitchell, dubbed “the thousand dollar beauty” by the Ottawa Citizen, was thought to be the largest amount ever paid for a Class B infielder.8

Shaughnessy made another midseason move that drastically improved the Senators’ fortunes. One of his young pitchers had an ineffective curveball and needed another pitch in his arsenal, and so Shaughnessy suggested that he begin throwing a spitball.9 That pitcher was 23-year-old Urban Shocker, known to the locals as “Herb” or “Herbie.”10 Shocker took his manager’s advice and added the spitter to his repertoire. The results were better than anyone could have hoped for.

On July 18 Mitchell made his debut with the Senators. The very next day, with Ottawa 8½ games behind the first-place London Tecumsehs, Shocker began to use his spitball.11 The Senators romped to a 19-1 victory that day, their first in a long string of victories. Shocker went on to win four games in a single week in August, and he completely dominated the opposition down the stretch.12 Mitchell justified his hefty price tag, solidifying Ottawa’s infield defense and batting a spectacular .343 for the season. After a stunning 40-13 run, the Senators found themselves in first place heading into the final day of the season with a 75-45 (.625) record, 9 percentage points ahead of London at 69-43 (.616).

Despite the electrifying pennant race, the mood in Canada’s capital had darkened over the summer of 1914. The governor general had declared war on Germany on August 4, and the nation focused on far more important matters. Civil servants were no longer allowed to leave work early to attend weekday afternoon games at Lansdowne Park. The team took a 40 percent attendance hit over the final month of the season.13

Ottawa and London were each scheduled to wrap up the season with Labor Day doubleheaders at home against relatively weak opponents.14 Since teams could finish the season with a significantly different number of games completed, the title was awarded to the team with the best winning percentage.15 That meant either a single Ottawa win or a London loss would give the Senators their third consecutive championship.

London kept its pennant hopes alive by defeating the St. Thomas Saints 4-1 in their morning affair, while rain forced the cancellation of the morning game between Ottawa and the Peterborough Petes. The Ottawa doubleheader was rescheduled for the afternoon, with the rain finally letting up around 1 P.M. After 20 gallons of gasoline were spread around the diamond and set on fire, the field was deemed playable.16

Shocker, pitching on one day’s rest, got the start for Ottawa. He had earned his 19th win of the season by pitching seven scoreless innings against Erie on the 5th.17 Shaughnessy, looking ahead to the final day of the season, had wisely yanked Shocker once the outcome was decided. Peterborough countered Shocker with Ken Tracey (10-13).

Mitchell led off the bottom of the first inning with a single. After a one-out single by Rabbit Nill, Shaughnessy flied out to left fielder Oliver Welsh. Mitchell tagged up and advanced to third on the fly ball, and when Welsh uncorked a wild throw, the Ottawa speedster come home with the game’s first run. Carl “Dad” Stewart followed with a two-out hit to drive home Nill and put Ottawa up 2-0.

Another poor defensive play by Welsh cost the Petes in the bottom of the second. After a walk to Frank Smykal, Mitchell singled into left field. Welsh booted the ball all around the outfield, allowing Smykal to score and extend Ottawa’s lead to 3-0.

Shocker faced the minimum number of batters through five innings but ran into some trouble in the top of the sixth. Weak-hitting Frank Fox led off with an infield single. Shocker retired the next two hitters before Curley Blount, Welsh, and Biddy Dolan came through with consecutive two-out hits to score a pair of runs and cut Ottawa’s lead to 3-2.

The “Shagmen” padded their lead in the bottom of the sixth with four consecutive hits. Shocker got things rolling with a one-out single. After Mitchell singled, Edgar “Lefty” Rogers doubled to deep center field to score Shocker. Nill singled Mitchell home and Shaughnessy capped the inning with a sacrifice fly that brought Rogers home to make the score 6-2.

Shocker faced only nine batters over the final three innings to easily preserve the victory and give the Senators their third consecutive Canadian League title − or so they thought. The Tecumsehs had defeated the Saints 8-5 in the second game in London, but London refused to concede defeat. Their 40-year-old player-manager, Doc Reisling, had a trick up his sleeve. Without seeking permission from league President James Fitzgerald, Reisling had made an agreement with the Saints to play a third game later that afternoon. Another London win coupled with an Ottawa loss in the second game of the doubleheader would theoretically hand the championship to the Tecumsehs by 3 percentage points. To add to the intrigue, Peterborough had tabbed the league’s best pitcher, 20-game winner Lou Schettler, to start the second game against the Senators.

At some point in the afternoon, Ottawa caught wind of Reisling’s ruse.18 With the Senators and Petes locked in a scoreless tie after two innings in the second game, Shaughnessy conferred with Peterborough player-manager Blount, and the game was called because of “cold weather” by umpire Buck Freeman.19 Regardless of the outcome of the third game in London, the cancellation ensured that Ottawa would be crowned champions. The Tecumsehs won the third game by a score of 9-2, but the shenanigans were moot; Fitzgerald ruled the following day that the third game in London would not count. The decision was based on a little-known rule preventing teams in Organized Baseball from playing more than two games in the same day.20

Shocker’s breakout 1914 season made him a bona-fide major-league prospect. He posted a 20-8 record and a stellar 2.17 ERA, leading to rumors that he might join the Detroit Tigers the next season. However, Tigers manager Hughie Jennings disliked spitball pitchers, and Shocker returned to Ottawa for the 1915 season.21 He put up even gaudier numbers: 19 wins, a 1.99 ERA and an incredible 0.772 WHIP.22 He also set new Canadian League records with 186 strikeouts and 303 innings pitched. Shocker was drafted by the New York Yankees after the 1915 season, and went on to become one of the best major-league pitchers of his era.23

A scaled-back Canadian League operated for the 1915 season with the war raging in Europe. Salaries and roster size were reduced, and the league cut back to six teams. The Senators waltzed to their fourth consecutive championship, finishing 12½ games ahead of the Guelph Maple Leafs, although the Ottawa fans understandably lacked their normal passion that summer.24

In the spring of 1916, the league debated whether to continue operating. When the 207th (Ottawa-Carleton) Battalion moved into Lansdowne Park in April, the Senators found themselves without a home, and the league suspended operations for the 1916 season.25 The league never resumed after the war. The Ottawa Senators, led by the masterful Shaughnessy, ended their existence with a perfect record of four Canadian League championships in four seasons.26

In addition to the sources cited in the Notes, the author consulted Baseball-Reference.com and the SABR/Baseball Reference Encyclopedia. The box score from this game is available on page eight of the September 8, 1914, edition of the Ottawa Citizen.

2 The National Hockey League was established in Montréal on November 26, 1917.

3 The 19 Canadian-based teams in the minor leagues in 1914 were Toronto and Montreal in the Double-A International League; Brantford, Hamilton, London, Ottawa, Peterborough, St. Thomas, and Toronto in the Class B Canadian League; Vancouver and Victoria in the Class B Northwestern League; Winnipeg and Ft. William-Pt. Arthur (now Thunder Bay, Ontario) in the Class C Northern League; and Calgary, Edmonton, Medicine Hat, Moose Jaw, Regina, and Saskatoon in the Class D Western Canada League. As of 2020, the most minor-league teams ever based in Canada was 24 in 1913.

4 The Erie Yankees were the only American-based squad in the eight-team Canadian League. All six teams in the Western Canada League were based in Canada.

15 Since there weren’t any lights in ballparks of this era, it was common for tie games to be called on account of darkness. These games were not resumed later, and they did not count in the standings. In addition, games canceled because of inclement weather were not always made up.

19 There were no reports of a significant temperature change during the day.

26 Frank Shaughnessy went on to serve as president of the International League from 1936 until 1960.