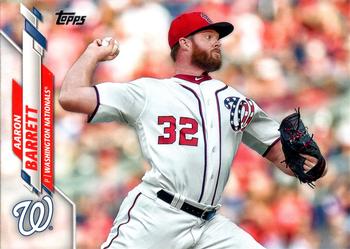 “You’ve been an inspiration to me, brother; an inspiration to these coaches and these players. And it’s an honor I got to manage you. But it’s more of an honor to tell you you’re going back to the big leagues.”– Matt LeCroy, manager, Harrisburg Senators, speaking to Aaron Barrett surrounded by his teammates on September 3, 20191 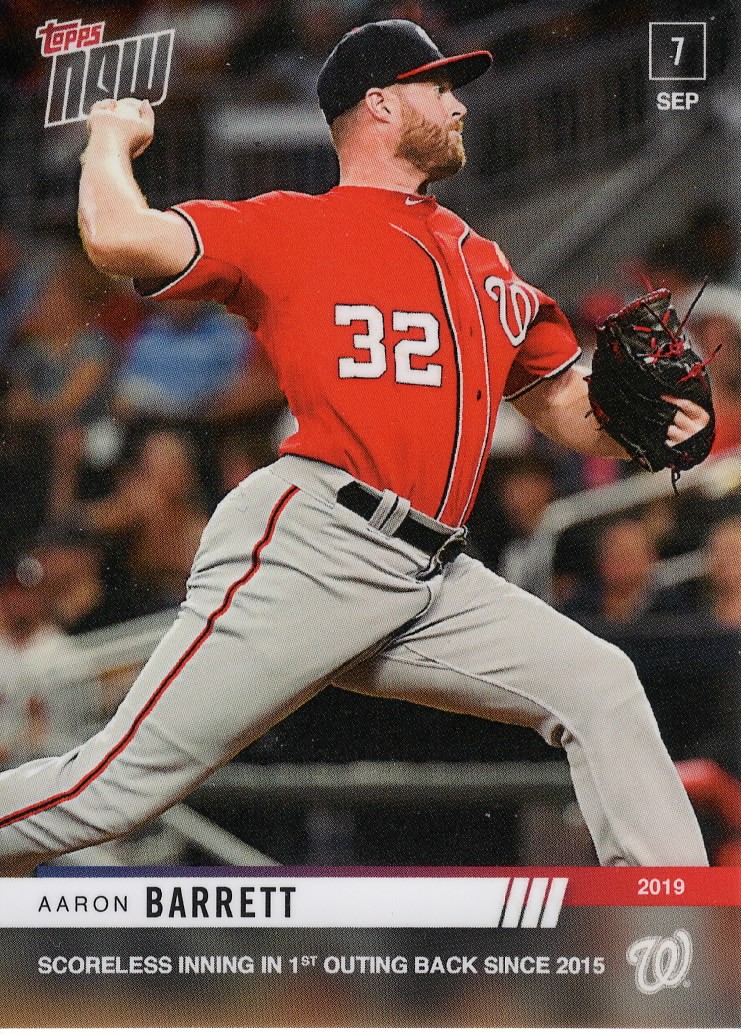 On Thursday afternoon, May 23, 2019, it was hard to imagine that the baseball season could get any worse for the Washington Nationals. They headed home after being swept out of New York by the Mets in a four-game series. Their record stood at 19-31, 10 games behind the first-place Philadelphia Phillies and barely ahead of the fifth-place Miami Marlins in the National League East Division.

At season’s end, after the Nationals won the World Series, winning manager Dave Martinez called his team “a relentless, resilient bunch of guys.”2 Those were the same qualities that became apparent to others after the turnaround from the season’s low point.

As they readied to play this Saturday night game in Atlanta, their record since May 23 (59-31, .656) reflected a winning percentage good enough to win 106 games in a full season. Unfortunately for the Nationals, over that same period the Braves won 60 games to take the division lead. The Nationals, now in second place, were making things difficult for themselves after losing the first two games of the series against the Braves, falling nine games behind. They appeared resigned to focusing on securing a National League wild-card game spot against a Central Division foe — Milwaukee, Chicago, or St. Louis.

Tonight’s pitching matchup pitted the Nationals’ Austin Voth (1-0, 3.91 ERA) against the Braves’ Julio Teheran (9-8, 3.38 ERA). The Braves took a 1-0 lead in the first inning on Ozzie Albies’ solo home run off Voth, who yielded another solo home run to Josh Donaldson in the fourth for a 2-0 Braves lead. Meanwhile, Teheran was holding the Nationals in check through the first four innings. Trea Turner singled to lead off the game before being picked off first base. That was the Nationals’ only hit until Asdrúbal Cabrera hit a solo home run in the fifth inning to cut the Braves lead to 2-1.

The story of the night was about to unfold when Aaron Barrett, on a big-league mound for the first time since August 5, 2015, came in to pitch the fifth inning against the Braves. On that 2015 night he yielded three runs on four hits to the Arizona Diamondbacks and retired just one batter. Something was wrong. He couldn’t feel his fingers and in one month’s time, he underwent successful Tommy John surgery and had bone spurs removed from his elbow.

Recovery from Tommy John surgery typically takes 12 to 18 months of dedicated rehabilitation. In July 2016 Barrett was pitching in a simulated game at the Nationals’ spring-training complex in Viera, Florida, when he broke his right humerus, a gruesome occurrence that sounded like a “full-on gunshot” to all near him.3 James Andrews, the renowned orthopedic surgeon, had never seen damage like this before.4 The goal for surgery was to allow Barrett to have a functioning right arm, not to get back to pitching a baseball. Barrett was determined, facing the most arduous of regimens, both physical and mental, to teach his right arm to pitch again. By the time he threw his first bullpen session in 2018, he had been away from the game for almost two years. The road back for Barrett started with the 2018 short-season-A Auburn (New York) Doubledays of the New York-Penn League, 20⅔ innings in 20 games.

Miraculously, March 2019 found Barrett back with the Nationals at spring-training camp. Even he couldn’t quite believe it. “Sometimes I need to take a step back and tell myself, ‘Dude, you’re doing it.’ It makes me emotional just thinking about it.”5 Barrett spent the 2019 season at Double-A Harrisburg under the watchful eye of his manager, Matt LeCroy, and the Nationals minor-league player development staff. Barrett was on his way back! In fact, his pitching line and workload for the season — 50 games, 52⅓ innings pitched, 31 saves, 2.75 ERA — closely aligned with his first time around at Harrisburg in 2013 and his 2014 major-league debut season with the Nationals.

His pitching keyed Harrisburg’s winning the first-half championship in the Eastern League’s Western Division, as they got off to a 21-4 start. Harrisburg lost to Bowie in the first round of the playoffs, but Barrett wasn’t there. There was another task at hand. Barrett was caught off guard on September 3 when LeCroy delivered the good news to him in front of his Harrisburg teammates, while standing on the mound before a team workout.6 Barrett was returning, at long last, to the Washington Nationals.

On this night with Barrett on the mound, the adrenaline was flowing. He walked Adeiny Hechavarria on four pitches, only one of them even close to the strike zone. When Teheran bunted a two-strike foul ball caught by a charging Ryan Zimmerman for the first out, it seemed to settle Barrett. Ronald Acuña looked at a bending slider for a called third strike and Ozzie Albies hit a soft fly ball to center for the third out. That was the grit, now came the emotion. Barrett walked slowly back to the dugout, greeted first by his catcher, Yan Gomes. When he sat down on the bench, the tears flowed uncontrollably as did the hugs. Aaron Barrett was back in the big leagues.7

“After the outing was over, I’m just walking off and all the emotions just hit me,” Barrett said. “Just, you did it, man. You did it. You dream about the moment, you picture the moment, you try to visualize what it’s going to be like. And you know whatever moment or whatever happens, it’s unlikely anything you envisioned.”8

Hunter Strickland replaced Barrett on the mound in the sixth inning. Freddie Freeman singled to center before being forced at second by a Josh Donaldson groundout. Brian McCann hit a two-run home run, then Matt Joyce hit a solo homer and the Braves led 5-1. The Nationals managed to narrow the gap in the seventh and eighth innings. In the seventh inning, three consecutive walks by Darren O’Day and Sean Newcomb were followed by Zimmerman’s double-play grounder for one run. In the eighth inning, Juan Soto doubled in two runs after Turner doubled and Adam Eaton was hit by a pitch. The game ended with Braves closer Mark Melancon, a former National, retiring the side in order in the ninth inning to record the save in a 5-4 Braves victory. Regardless of the outcome, the real story of the night was not over. Aaron Barrett’s courage, determination, and perseverance lived on toward October, thanks to his teammates closing the regular season with a 15-6 record.

Barrett pitched twice more in the regular season. Five days after his return, he yielded three runs to the Minnesota Twins on three hits and two walks in only one-third of an inning. On the last Sunday of the regular season, Barrett returned to the Nationals Park mound for the first time since August 2015 and was greeted with a standing ovation. After the game, he shared, “The last time I was able to pitch in the big leagues was off this mound. Being able to get back off that mound again in front of the home crowd, game 162, the fans were incredible. I felt their energy and the amount of support that I’ve had from them all along.”9

An idea was hatched by Nationals principal owner Mark Lerner to have Barrett throw out the first pitch in three days for the National League wild-card game at Nationals Park against the Milwaukee Brewers.10 It was only fitting that Matt LeCroy, his Double-A Harrisburg manager, would be on the receiving end of that first pitch.

The evening began with Barrett, not surprisingly left off the Nationals active postseason roster, stalking around the mound, waving his arms, and exhorting a wildly screaming partisan crowd. Only then did he deliver the first pitch to LeCroy. The night ended with a wild-card game victory, euphoria spreading throughout Nationals Park.11 October started well for the Nationals and would finish even better for the newly crowned World Series champions.

As for Barrett, “Four years of rehab, all the pain, all the tears and what the team has gone through — it’s really come full circle. Now I can say I’m a world champion. It’s an honor to be a part of it. This is something I’ll never forget.”12

1 Sam Fortier, “A Gruesome Injury Could Have Ended His Career. His Return to the Nats Prompted Tears of Joy,” WashingtonPost.com, September 3, 2019, washingtonpost.com/sports/2019/09/04/after-four-years-gruesome-injury-nationals-reliever-aaron-barrett-is-returning-majors/.

7 “Aaron Barrett Has Emotional Return after Not Pitching in MLB for 4 Years,” YouTube.com, September 7, 2019, youtu.be/-upHI8FELaU.

8 Jesse Dougherty, “After Four Years, Aaron Barrett Made It Back to an MLB Mound. And the Tears Flowed,” WashingtonPost.com, September 8, 2019, washingtonpost.com/sports/2019/09/08/after-four-years-aaron-barrett-made-it-back-an-mlb-mound-tears-flowed/.