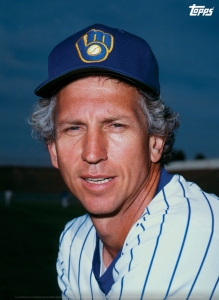 A contest pitting age versus youth produced a “scintillating pitching duel,” gushed Motor City sportswriter Brian Bragg.1 The Milwaukee Brewers’ 37-year-old, 254-game winner, Don Sutton, recently acquired as a postseason insurance policy, and 23-year-old Detroit Tigers emerging star Dan Petry, with 40 career wins to his credit, tossed zeros for seven innings until Harvey’s Wallbangers woke up and exploded for four runs in the eighth, leading to a benchmark victory in Sutton’s 17-year-career. “I don’t usually show much emotion,” said the curly-haired, man-permed Sutton. “But it was a big game for the Milwaukee Brewers and my first victory in the American League. Tonight was very special.”2

Skipper Harvey Kuenn’s Brewers were marching to their first division title in their 14-year existence as they prepared for the second game of a three-game series against the Tigers to complete a 15-game homestand in Beer City. [The Brewers were declared second-half winners in the strike-shortened 1981 season and went to the postseason for the first time in franchise history.] The Wallbangers, so named for the club’s slugging prowess, had the big leagues’ best record (81-56), though they led the Baltimore Orioles by just three games in the highly competitive AL East. Sparky Anderson, in his fifth season as Tigers’ pilot after nine immensely successful seasons with the Cincinnati Reds, had his club (71-65) in third place, nine games back in the division.

The Brewers pulled off one of the baseball’s biggest trade-deadline deals when they acquired Sutton from the Houston Astros on August 30 for cash and Kevin Bass, Frank DiPino, and Mike Madden.3 “I hadn’t seen him in person since the 1960s,” quipped Kuenn about Sutton.4 Kuenn played against Sutton when the right-hander was a rookie with the Los Angeles Dodgers in 1966 and he himself was finishing his 15-year career. After 567 starts in the NL, Sutton went the distance in his first trip to the mound in the AL but lost, 4-2, to the Cleveland Indians in the second game of a twin bill on September 2. In his second start, he faced 14-game winner Petry, the Tigers’ second option after staff ace Jack Morris.

On a pleasant late summer Tuesday evening, County Stadium drew a disappointing crowd of 11,709 spectators given the hometown Brewers’ pennant ambitions. Because of a malfunctioning transformer, the large scoreboard in center field was not in use; however, for most of this game, the fans didn’t need one to keep score. Sutton and Petry, who had missed his last start with lower-back stiffness, kept the game scoreless through seven innings. “I’ve never seen him with better stuff,” raved Anderson about Petry, who yielded just three hits and a walk through seven.5 Sutton had surrendered six hits (two each to three September call-ups, Howard Johnson, Glenn Wilson, and Mike Laga) and hadn’t walked a batter. “I’m not that quick,” said Sutton. “To be effective I have to throw strikes and change speeds. Tonight, I was as good as I’ve been all year at putting the ball where I wanted to.”6

The Brewers caught a break in the eighth. With one out, Ed Romero hit a bounder to shortstop Alan Trammel, who dove for the ball, but missed it. “This concrete infield got (Petry) tonight,” complained Anderson. “Romero hits that same ball (at Tiger Stadium) and he’s out. Easy.”7 But they weren’t playing in the Old Gray Lady at the corner of Trumbull and Michigan Avenues. The Brewers then benefited from some Tigers inexperience. Starting in place of second baseman Lou Whitaker was regular third sacker Tom Brookens (Howard Johnson was at third), who admitted that he and Trammell should have discussed who’d be responsible for second base with the dangerous Paul Molitor at the plate. After fouling a pitch to right, Molitor hit what sportswriter Vic Feuerherd of the Milwaukee Sentinel described as a “dying quail,” a short blooper to right field.8 Kuenn had called for a hit-and-run; as soon Romero broke for second, so, too, did Brookens, who added, “I catch that ball easy if I’m playing normal.”9

With runners on the corners, Robin Yount strode to the plate. Just 26 years old but already in his ninth big-league season, Yount entered the game leading the AL in slugging (.571) and was second in batting average (.327). “Without a doubt,” declared Petry, “if the season ended today, he’d be the MVP. He has power. He hits for average.”10 Yount connected on a 1-and-2 count for his third hit of the game, sending a sharp grounder between third and short to drive in Romero with the first run of the evening. “It was a slider,” said Petry. “I was trying to strike him out or get him to pop up.”11 Yount, who went on to win the AL MVP in ’82, capturing 27 of 28 first-place votes, noted that the pitch was “up a little more than (Petry) wanted.”12

At this critical juncture, Cecil Cooper dug in in the batter’s box. Cooper had 100 RBIs, good for third in the AL, but was suffering from a severe cold and his eyes watered profusely. “His head felt as if it were trapped inside an elevator with eight loud-mouthed cigarette smokers,” wrote Brewers beat reporter Steve Aschburner in his best mind-reading impression.13 “I think the ball Paulie hit messed (Petry) up,” said Cooper. “And then Robin got a hit with two strikes. That starts him thinking about something else besides me.” Cooper parked Petry’s last pitch of the game in the right-field bleachers with his 28th home run of the season to give the Brewers a 4-0 lead. Ted Simmons greeted reliever Dave Rucker with a single and moved up a station on catcher Lance Parrish’s passed ball, but was left stranded.

Undoubtedly more relaxed with a four-run lead, Sutton took the mound in the ninth. He surrendered his seventh and final hit, a two-out single to Jerry Turner, then finished the game in 2 hours and 25 minutes by recording his ninth strikeout. Normally reserved on the mound, Sutton pumped his fists as batterymate Ted Simmons clenched the ball and did a little dance at home plate before racing to and embracing his hurler in a bear hug.

Sutton’s 255th victory was his first in the American League and his 56th shutout to tie Bob Gibson for ninth place all time. “I think I have the advantage over here because I have Ted as a catcher,” gushed Sutton after the game, directing all of the credit to Simmons, in his second season with the Brewers after 13 with the St. Louis Cardinals. “Ted has seen me in the National League a long time, and he knows how I pitch. I just followed Ted. He did a god job of leading. I didn’t change but one or two pitches. He does his homework.”14

Sutton proved to be an invaluable acquisition for the Brewers’ drive to their first postseason berth. On the last day of the season, Sutton pitched eight strong innings against the Orioles to notch the victory that gave the Brewers the division crown. After going 4-1 in seven starts with a 3.29 ERA in 54⅔ innings in September, Sutton won another start in the Brewers’ best-of-five victory over the California Angels in the ALCS. His magic subsided in the World Series against the St. Louis Cardinals, who hit him hard in two starts, scoring 11 runs (nine earned) in 10⅓ innings and collaring him with one loss.