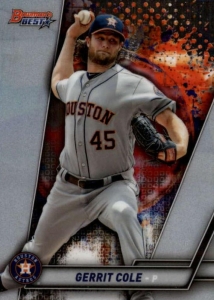 “You pitch a little bit to the score in a tight game, but in a game like this, you try to keep trudging along with what you’re doing and not let anything affect you. If you can perfect that craft, it pays dividends for you as the season goes along.” – Gerrit Cole1

The “game like this” was a microcosm of the 2019 season series between the Houston and Seattle. Before this game, the Astros had taken 15 of the first 16 between them; they would eventually win 18 of 19. It’s hard to fathom that the last-place Mariners, who finished the season with 68 wins, 39 games behind the AL West Division-winning Astros, started the season 13-2. (The losing commenced when they were swept at home by the Astros.) The Mariners’ two-game sweep of the A’s at the Tokyo Dome seemed so long ago and so far away.

Taking the hill for the home team on September 8, 2019 ,was Gerrit Cole, who was competing with his teammate Justin Verlander for the AL Cy Young Award. As dominant as Cole had been this season, it is hard to believe that after a 9-4 loss to the Chicago White Sox on May 22, his record was 4-5 with a 4.11 ERA. Cole did not lose another game in the 2019 regular season. Cole had dominated the Mariners in 2019, having struck out 21 batters in 13 innings in his previous two starts against Seattle. The top of the first was a breeze for Cole: He needed only nine pitches, striking out two and getting a harmless pop fly to shallow center field.

After Hernandez retired the first five Astros, the onslaught commenced with two outs in the bottom of the second. September call-up Kyle Tucker walked and Abraham Toro laced a double down the right-field line, putting runners at second and third. Martin Maldonado’s grounder to short should have ended the Houston threat, but was bobbled by Dee Gordon, and both Tucker and Toro (unearned) scored. Jake Marisnick blasted Hernandez’s next pitch 432 feet onto the train tracks in left field and extended the Astros’ lead to four runs. Marisnick was part of a package of minor-league players the Astros acquired from the Marlins in 2014 that included Colin Moran, who was part of Houston’s package sent to Pittsburgh when they acquired Gerrit Cole.

The carnage continued in the third inning as 2017 AL MVP Jose Altuve smacked Hernandez’s first pitch to right-center field for a leadoff double. The third pitch after that one hit Alex Bregman and put runners at first and second with none out. Rookie sensation Yordan Alvarez ripped a line drive to right that bounced past Keon Broxton (officially scored as a double) and drove in Altuve and Bregman, giving Houston a 6-0 lead. Aledmys Diaz poked a double off the scoreboard in left, plating Alvarez. Tucker’s blast to right field bounced past Broxton and over the wall for a ground-rule double, driving in Diaz and making the score 8-0. Toro walked, then Maldonado’s double down the left-field line scored Tucker gave Houston a 9-0 lead. It was the fifth double surrendered by Hernandez in the third inning, and after facing seven batters he had not recorded a single out. “I was fine until the third,” Hernandez said. “I fell behind a lot of times. I had to throw a strike and they hit the ball pretty hard. I was leaving the ball in the middle of the plate. That’s a good lineup. You can’t miss.”2

After getting Marisnick to pop out to shortstop for the first out of the inning, Mariners reliever Erik Swanson coughed up a three-run bomb to right off the bat of George Springer (his 31st of the seasob) as the Astros piled on three more runs for a 12-0 lead. Bregman singled and Astros skipper A.J. Hinch gave him the night off, pinch-running Miles Straw. The speedy Straw then scored from first on Alvarez’s second double of the inning.

With one out in the Mariners’ fourth, Shed Long hit an opposite-field home run to left that put the Mariners on the board, 13-1. “According to Statcast, it was a 338-footer that traveled 95 MPH with only a 25% chance of being a base hit normally,” observed a writer for SB Nation.3 Even Long seemed surprised by his home run. This would not only be the only run the Mariners scored, it was their only hit of the game. Long was their lone baserunner as the Mariners couldn’t draw a walk off Astros pitching all night.

With the bases loaded in the bottom of the fifth, Tucker blasted a double to deep right field that drove in Garrett Stubbs (who had pinch-run for Altuve) and Straw; 15-1 Astros.

With runners at first and third in the bottom of the sixth, Alvarez ripped his third double of the game, scoring Stubbs, Astros up 16-1.

In the seventh the Astros loaded the bases off Mariners reliever Reggie McClain, and Springer’s force-play grounder plated Toro and put the Astros up 17-1. After walking Stubbs, McClain surrendered three consecutive singles that accounted for four runs and gave Houston their final 21-1 lead.

“The team offense was incredible today,” Hinch said. “We put up good at-bat after good at-bat. We scored double-digit runs before we hit our first single. That’s the kind of day it was. It was a special day for our offense.”4 Every Houston batter, including starters and subs, had at least one hit and scored at least one run. Seven players had multiple hits. It was the second time in a month that the Astros outscored their opponent by at least 20 runs. (They blasted the Orioles 23-2 on August 10.) Houston hit a franchise-record 11 doubles, including three by Alvarez and two each by Toro and Tucker, and tied a franchise record with 13 extra-base hits. Overall, Houston accumulated 39 total bases. It was Week One of the National Football League season and the Astros outscored nine NFL teams on that given Sunday. (12 for the week!)

As great as the offense was, so was the pitching of Gerrit Cole. Through eight innings, he never pitched out of the stretch. He struck out 15, his third consecutive start with 14 or more strikeouts and fifth consecutive start with 10 or more, a streak that would extend to nine. Cole’s strikeout of Broxton in the top of the sixth inning was his 277th of the season, eclipsing his personal high of 276, set in 2018. All that stood between Cole and a perfect game was the solo home run he surrendered to Long. Cole’s greatest challenge was staying loose in the clubhouse during the long innings of watching his team’s offense clobber Seattle pitching. “I tried to stay in rhythm, and not necessarily physically as much as mentally,” he said. “I handled it pretty well, and we had some conversations in between which kind of kept me engaged.”5 It was a heck of a way for Gerrit Cole to spend his 29th birthday.

As great a day it was for Houston, it was a miserable one for Seattle. It was the franchise’s worst loss ever. “We got hammered,” Mariners manager Scott Servais said. “What else can you say. We made a costly error early and let it get away from us after that. Just not a good effort.”6 It was the Mariners 11th consecutive loss and 16th in their last 17 to the Astros. The Mariners lost all 10 games against the Astros at Minute Maid Park in 2019. One must go back to September 19, 2018, to find when they had last won in Houston, a losing streak at 13 games through the end of the 2019 season.

In addition to the sources cited in the Notes, the author consulted Baseball-Reference.com, Retrosheet, and YouTube