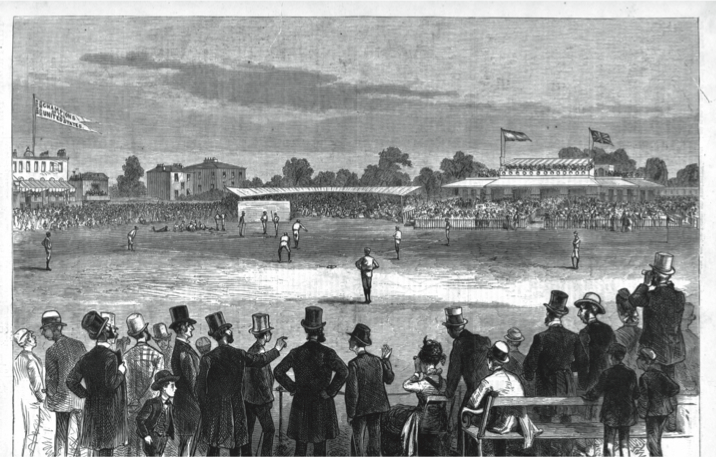 It has been stated that America and England are two countries separated by a common language. The countries are also separated by a common love of bat-and-ball games. Baseball and cricket were part of the American sporting scene in the middle of the 19th century. English cricketers toured America on occasions. Englishborn Harry Wright, the celebrated ballplayer and skilled cricketer, was included among those wishing to take baseball to England.

In January 1874 Albert Spalding, then a pitcher for the Boston Red Stockings, traveled to England as an emissary of the Boston club and the Athletics of Philadelphia. Boston and the Athletics were the preeminent baseball clubs of that time. With letters of introduction, Spalding secured an audience in London with the renowned Marylebone Cricket Club. He sought assistance in arranging a series of baseball exhibitions and offered the prospect of Anglo American cricket matches as further enticement. With the support of the Marylebone Cricket Club, the Red Stockings and Athletics agreed to play baseball among themselves and also to combine to play cricket against English clubs.

The players arrived in Liverpool on July 27, 1874. Harry Wright attempted cricket instruction aboard the ship. His brother, Red Stockings shortstop George Wright, was considered adept at cricket, and younger brother Sam Wright was brought along specifically for his cricket expertise. Boston and the Athletics played their first game on July 30 at Edgehill, the grounds of the Liverpool Cricket Club. Before a crowd of about 500 the Athletics outlasted Boston, 14–11, in a 10-inning affair. A smaller gathering saw Boston win, 23–18, on July 31. The apparent lack of interest disappointed the tourists, but lackluster promotion was blamed.[fn]There was some suggestion that Liverpool was not fertile ground for sporting exhibitions, with even cricket not attracting as much interest there as elsewhere in England. New York Herald, August 2, 1874.[/fn] The teams traveled to Manchester for a match at the Old Trafford Cricket Grounds[fn]The Old Trafford Cricket Ground, located near the Manchester United FC stadium bearing the same name, remains in use today and serves as the home of Lancashire County Cricket Club.[/fn] on August 1. About 2,000 greeted the Americans, who treated the crowd to a 13–12 affair won by the Athletics. Before the match the Americans explained the manner of setting up the field and treated the spectators to an exhibition of throwing and catching.[fn]New York Times, August 3, 1874.[/fn]

After the match in Manchester, the Americans traveled to London where they were feted by the Marylebone Cricket Club. Before a bank-holiday crowd of 5,000 on August 3, Boston routed the Athletics, 24–7, on the hallowed Lord’s Cricket Ground. The game featured several home runs, as did other matches on the tour, partly on account of the solid hits getting past fielders on the hard cricket grounds of England. Despite the rout and errors in the field, the British press complimented the fielding skills of the ballplayers.[fn]New York Times, August 4, 1874.[/fn] The Americans also endeavored to play their hosts in cricket over August 3 and 4. Throughout the tour, the Americans were granted a considerable advantage of players (often 18 or more Americans against 11 or 12 English) when they met English opponents in cricket. In challenging Marylebone, the advantage helped the Americans claim a 107–105 win.

Prince’s Club hosted the Americans at their grounds in Chelsea on August 6–7. On the eighth the teams played at Old Deer Park, adjacent to the Kew Gardens. The grounds formed a basin that resulted in a sharp descent as batters ran for first base.[fn]Boston Journal, August 24, 1874.[/fn] After a delay because of a thunderstorm, the Americans met the Richmond Cricket Club in a 22-versus- 13 cricket match that concluded early in deference to baseball. The 2,000 spectators watched Dick McBride shut out the Red Stockings through seven innings. Boston managed to score late, but the Athletics claimed an 11–3 win.

The Americans spent August 10 and 11 at the Crystal Palace in London, “situated in a midst of a grove of noble trees.”[fn]Ibid.[/fn] Despite the idyllic setting, rain suspended the first game in the seventh inning, Boston claiming a 17–8 win. The Red Stockings scored six runs in the first inning and eight in the third in gaining an early lead they never relinquished. On the 11th the Athletics hit Spalding hard, so much so that Harry Wright relieved the Red Stockings ace. Wright fared little better and the Athletics won, 19–8.

The trip concluded in Dublin, Ireland. After an initial rain-induced delay, the Americans and the Irish commenced a cricket match on August 24, but suspended the game for baseball. Boston defeated the Athletics, 12–7. The next day the Americans completed their cricket program with a win of 165 runs to 78, and the Athletics defeated Boston, 15–4. On the 26th, the final day of competition on the tour, a combined nine of Red Stockings and Athletics faced a team made up of six from the Dublin Cricket Club supplemented by George Wright pitching and Harry Wright catching. Even with the Irish nine allotted five outs per inning, the Americans won, 12–6. Afterward the Americans played a scratch game among themselves. With the conclusion of the tour, the Americans returned home aboard the Abbotsford, arriving in Philadelphia on September 9.

The tour interrupted the National Association season. At the time of their departure Boston and the Athletics were first and second, respectively, in wins. Their absence allowed the Mutuals to win enough games to make the stretch run a three-team fight. In the end the Red Stockings won their third straight National Association pennant, with the Mutuals second and the Athletics third.

The tour was not the financial success its promoters had hoped it would be. The clubs lost money on the venture. Time would prove what was assumed then: Americans remained true to their baseball and the English to their cricket. According to the Philadelphia Inquirer, “The experience will probably be sufficient to deter Americans proficient in athletic games and sports hereafter endeavoring to show the English people what they can do.”[fn]Philadelphia Inquirer, September 11, 1874.[/fn]