In addition to the six research presentations listed below, the conference included:

Here is a list of research presentations from the 2012 conference: 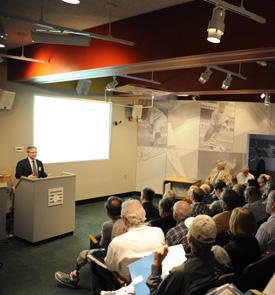 The National Pastime’s earliest days were a hot topic of conversation for a group of visitors to Cooperstown. … For the 55 registered attendees from across the country, it’s an opportunity to engage with others that share the same unique passion.

“I was here two years ago and it was the most fun I’ve ever had at a conference in my life, and I look forward to this year’s to be even more fun,” said Long Island’s David Nemec, an author of more than 30 books involving baseball. “The presentations are spectacular and the people are most enjoyable to be with.”

According to Peter Mancuso, the Nineteenth Century Committee Chairman who runs the conference (“actually this conference runs me,” he joked), “there’s wonderful people that participate in this conference at all levels. Even if they are not a presenter, they are in the audience asking some really profound questions. And of course we have the great talent of all of these researchers and writers – they really breathe life into the conference.”

Included among the varied research presentations are “Bridegrooms and Superbas and Dodgers … Oh My!: The Birth of Brooklyn Baseball in the 19th Century,” “The Birth of Baseball Statistics,” “Abner Graves: The Man Who Brought Baseball to Cooperstown,” “’The Great John L.’ and the National Game,” “A Comparison of Alexander Cartwright and William Wheaton” and “John B. Day, the Metropolitan Exhibition Company and the Re-establishment of Major League Baseball in New York City.”

“I learn something from almost everybody I talk to,” Nemec said. “They’ve delved into different types of research than I have. They have a different slant on certain aspects of the 19th century game. To me the 19th century game was a prism of the entire late 19th century, which was a very fluid, fast-moving time. Society and many features of the country changed very quickly, and baseball kept up with it.”

Here’s another report from Francis at BaseballHall.org: 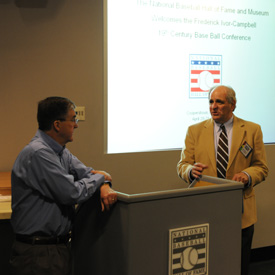 Ryczek, the author of three books on 19th century baseball, was referring to the two-day event, held at the National Baseball Hall of Fame and Museum’s Bullpen Theater, which concluded Saturday afternoon.

“A lot of people have done some incredible research that the general public might not be interested in hearing but to us it’s fascinating stuff,” said Ryczek, attending his fourth conference. “We all have a common interest, and for 55 of us to get together and enjoy each others company is a great time.”

Ryczek’s initial interest in 19th century baseball began in the early 1980s and came about because it was unknown to most people.

“It was a big and vast void that very few people had ever touched,” he said. “So to learn about something that is unknown to most people and trying to figure out what it was all about, why things happened, why it evolved the way it did, really interested me.”

Ryczek’s used a portion of his keynote address to compare himself with the three who had given the keynote addresses in the past – John Thorn, Peter Morris and David Block – who he considers great 19th century baseball researchers.

“I’m not a great researcher. And I compare them to pitchers with a 98 mile per hour fastball like Justin Verlander and myself, in terms of research, to Jamie Moyer,” Ryczek said. “But Jamie Moyer has been a very effective major league pitcher because he knows what he can do and knows what he can’t do. He works the corners, he changes speed. I as a writer and historian can work the corners and change speeds to contribute to the knowledge of 19th century baseball.”

Attending the conference was Thorn, a prolific writer as well as Major League Baseball’s official historian, who began researching the national pastime’s pre-1900 era for many of the same reasons as Ryczek.

“What I loved about 19th century baseball when I first started looking hard at it in the early 1980s was that there were so few people who cared about it,” Thorn said. “I felt like I was going to the dark side of the moon. So much of my early work to me seemed solitary.

“So when Mark Rucker and I, who shared this enthusiasm, created the 19th century baseball research committee in 1982 we imagined that one day there might be 50 of us. And now I believe the committee size is something like 700, 800. We have a lot of people who like this stuff.”

And though Peter Mancuso, the Nineteenth Century Committee Chairman who runs the conference, initially had misgivings about holding the conference at the Hall of Fame, where it has been held since its inception, it didn’t take long to change his mind.

“I had a lot of trepidation about putting the conference in Cooperstown because I know it’s not the easiest destination to get to,” he said. “But my vice chair, Bob Bailey, was absolutely convinced that by having it in Cooperstown it would take on a life of its own. And that has really proved out to be correct.”