With the favored New York Yankees leading the Brooklyn Dodgers two games to one, the clubs met for Game Four of the 1947 World Series at Ebbets Field. The thriller provided a storybook finish with tragic overtones.

Before the 1947 season began, the Yankees hired Dodgers coach Charlie Dressen away from Brooklyn. The incident precipitated such public animosity between the two clubs that Commissioner Happy Chandler was forced to intervene. Among the accusations were several that smacked of gambling. In the end, Chandler suspended Dressen for thirty days and Brooklyn manager Leo Durocher for the season for “consorting” with gamblers. Each team was fined $2,000. Fittingly, the two teams were to meet seven months later for a drama filled, seven-game World Series. With the favored Yankees leading two games to one, the clubs met for Game Four at Brooklyn’s Ebbets Field. The thriller provided a story-book finish with tragic overtones.

New York started Bill Bevens, a mediocre 7-13 right-hander who was a few weeks shy of his thirty-first birthday. Bevens experienced a lot of bad luck throughout the regular season, in part the residue of his seventy-seven walks in only 165 innings. Rookie Harry Taylor, who had a promising season aborted due to an elbow injury in August, got the call for the Dodgers.

The Yankees wasted no time jumping on Taylor. The first two batters, Snuffy Stirnweiss and Tommy Henrich, both singled, and Yogi Berra reached first on an error. Another walk, to Joe DiMaggio, forced in a New York run and sent Taylor to an early shower. Hal Gregg assumed the pitching duties for Brooklyn and got a pop up and a double play grounder to extinguish a potentially big inning for the Yankees. In the home half of the first, the Dodgers worked Bevens for two walks, but both runners were left stranded. 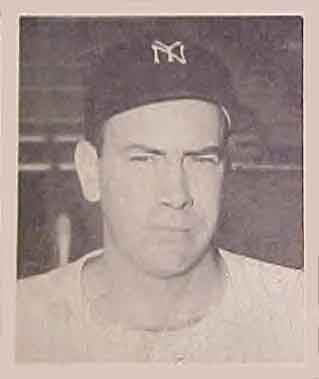 In the third, DiMaggio walked with two outs. George McQuinn then tapped a ball near the plate, and Brooklyn catcher Bruce Edwards threw wildly to first. DiMaggio, on a sign from third base coach Dressen, tried to score on the errant throw but was cut down easily at the plate on a throw by right-fielder Dixie Walker. The play provided the second-guessers with ample grist during the following few days. In the bottom of the inning the Dodgers’ Eddie Stanky led off with a walk and advanced to second on a Bevens wild pitch. But Johnny Lindell helped the Yanks escape damage with a tumbling catch of Jackie Robinson’s foul fly.

New York added a second run in the fourth when Billy Johnson tripled, and Lindell doubled him home.

The Dodgers finally took advantage of Bevens’s wildness in the fifth. The first two batters, Spider Jorgensen and Gregg walked. Although Brooklyn had yet to hit safely, they now had six free passes from the big right-hander. Stanky sacrificed both runners into scoring position. Pee Wee Reese then sent a ground ball to shortstop Phil Rizzuto who tossed out Gregg running to third. Jorgenson scored on the play making it 2–1.

To start the eighth, Hank Behrman replaced Gregg on the mound for the home club. Behrman withstood an error by Jorgensen but ran into serious trouble in the ninth. Lindell singled sharply past third before Rizzuto forced him at second. Bevens then sacrificed and was safe on a fielder’s choice when Edwards threw late to second. When Stirnweiss singled to center the Yankees had the bases loaded and a golden opportunity to put the game out of reach.

Brooklyn called in their ace reliever, Hugh Casey, to face the dangerous Henrich. Casey had won the previous day’s 9–8 contest and now, on his first offering, Henrich grounded sharply back to the mound, which led to a snappy 1-2-3 double play, pulling the Dodgers out of potential disaster. They still had no hits but were only one run down.

Thanks to a great catch by Henrich with his back to the wall in the bottom of the eighth, Bevens recorded his only perfect inning of the contest and carried his 2–1 lead into the final frame. 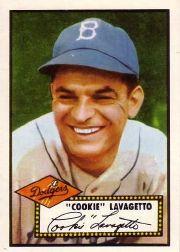 Bevens’s high wire act finally caught up with him in the strategy-filled, fatal ninth. After Edwards flied out to the wall in left, Carl Furillo collected the Dodgers’ ninth walk. That pass tied the 1910 mark for one World Series game set by Jack Coombs, but when Jorgensen fouled out, Bevens was one out away from the first World Series no-hitter. Al Gionfriddo, running for Furillo while Pete Reiser batted for Casey, stole second. This changed Yankees manager Bucky Harris’s thinking about pitching to Reiser. Although the talented outfielder was injured and couldn’t run well, New York decided to walk him. It was the tenth walk for Brooklyn and a disaster-inviting strategy, putting the winning run on base. Brooklyn skipper Burt Shotton sent in reserve infielder Eddie Miksis to run for Reiser.

The cat-and-mouse game reached another level when, for only the second time during the 1947 season, Eddie Stanky, a right-handed batter, was lifted for a pinch hitter. Cookie Lavagetto, another right-handed batter, was an aging veteran who had seen limited action during the season but was always a dangerous hitter. Cookie swung and missed leaving Bevens only two strikes away from victory and fame. But fate had its day as Lavagetto drilled the next offering high off the right field wall. The ball bounced around long enough for Gionfriddo to score the tying run and Miksis to tally the game winner. Bevens’s almost no-hitter had turned into an unforgettable loss.

JOE DITTMAR, a corporate trainer in the pharmaceutical industry, has been a leader in the SABR Connie Mack Chapter and was vice chairman of the Records Committee for 18 years. In addition to numerous articles published in SABR’s “The National Pastime” and “Baseball Research Journal”, he has authored “Baseball’s Benchmark Boxscores,” “The 100 Greatest Baseball Games of the 20th Century Ranked,” and the Sporting-News/SABR Research Award-winning “Baseball Records Registry: The Best and Worst Single-Day Performances and the Stories Behind Them.” Joe also teaches a baseball history class at his local community college.