This article was written by Irv Goldfarb

This article was published in 1947 Brooklyn Dodgers essays 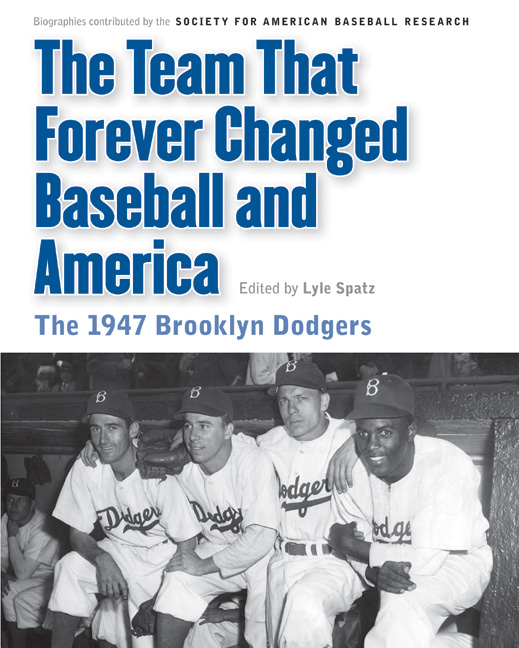 “You could not possibly train a baseball squad in Havana. The distractions are too great. … The after-dark program down there would kill a team before it ever had a chance to appear in National League competition. …” So opined baseball legend John McGraw when asked why he never took his New York Giants to Cuba, though he often vacationed there himself. “There are too many women, there is too much drinking, there is too much gambling, and the climate is much too hot.”1 Despite McGraw’s warnings, another brilliant baseball mind was to test that theory, and for a very specific reason.

Mention the Brooklyn Dodgers and the year 1947 to any baseball fan and they will immediately acknowledge it as a landmark season for both the franchise and major-league baseball. But besides the obvious reason for the familiarity of the year—the signing of Jackie Robinson and the official integration of the major leagues—the ’47 season was unique for team president Branch Rickey and his club in other areas as well. The Dodgers became the first team in baseball history to have their manager suspended before the season had even begun. Leo Durocher, a character not unfamiliar with controversy, had became fodder for the New York tabloids during the previous year by indulging in violent altercations with umpires, hitting a fan, and allowing actor George Raft to borrow his apartment and conduct a dice game in his living room. Leo added to the chaos when he wed divorced actress Laraine Day, an event that caused the Brooklyn chapter of the Catholic Youth Organization to withdraw its support of the famed Dodgers Knothole Gang.

Durocher then capped it off when he accused New York Yankees president and co-owner Larry MacPhail of entertaining two alleged gamblers at an exhibition game between the clubs. Pointing to MacPhail’s private box, Durocher chided: “If that was my box I’d be barred from baseball.”2 The two gamblers, Connie Immerman and Memphis Engelberg, were actually in the box behind the Yankees executive’s, but the incident was the proverbial straw and it forced Commissioner Albert ”Happy” Chandler to call for two hearings between the parties. On April 9, just before the season began, Chandler suspended Durocher for the season for “conduct detrimental to baseball.” Leo and his team were stunned.

The incident that touched off this baseball war was historically important for more than just the fact that it led to the suspension of the Dodgers manager: The private box in question was located at Gran Stadium in Havana, Cuba, the site chosen by Rickey for his team to train that spring.

The Dodgers were not totally unfamiliar with Cuba, having previously used Havana’s La Tropical Stadium as their spring training site for the 1941 and ’42 seasons, before Rickey arrived from St. Louis. Wartime travel restrictions, however, ended that experiment. And as early as 1943, Rickey had shown interest in having heralded Cuban Leaguer Silvio Garcia become the first player to test major league baseball’s color barrier. According to Cuban baseball authority, Edel Casas, Rickey traveled to Cuba and, thinking ahead to possible racial abuse, asked Garcia during the interview, “What would you do if a white American slapped your face?” When Garcia declared, “I kill him,” Rickey moved on.3 (However, a less popular version of the tale claims Rickey sent Walter O’Malley to Havana with a $25,000 letter of credit to sign the shortstop. When O’Malley got there Garcia was gone, probably having enlisted in the Cuban Army.)

When Jackie Robinson trained with the Montreal Royals in Daytona Beach in the spring of 1946, Rickey began to witness some of the racial confrontations he had feared. Trying to avoid as much of this as possible while preparing Robinson for his major-league debut, Rickey cited Cuba’s passion for baseball and its easy access from the mainland as two good reasons to hold training camp there in 1947. Another valid reason, no doubt, was the fact that blacks had been playing baseball in Cuba since the turn of the century. A city that had seen the likes of Oscar Charleston, Josh Gibson, and Satchel Paige appeared safe from any social upheaval at the sight of the Dodgers rookie.

If an under-the-radar arrival in Cuba is what Rickey wanted, that’s exactly what he got. The week the team landed, the new Gran Stadium (Gran Estadio de La Habana, to be exact) hosted the climactic three-game series between perpetual rivals Havana and Almendares in what was probably the greatest pennant race in the history of the Cuban League. Almendares needed to sweep the series to take the flag and they sent former Cardinal Max Lanier (in exile from the major leagues as a jumper to the Mexican League) to the mound. Lanier won the first game, 4-2. Almandares won again the next day, 2-1. An overflow crowd of almost 40,000 attended the third game, and watched in a frenzy as Lanier went out on one day’s rest and defeated Havana 9-2 to sweep the series and capture the title.

With the local baseball season at an end, it was the Dodgers’ turn to take over Gran Stadium. Built only the year before as part of Havana’s burgeoning modernization, the ballpark reportedly included a playing field and lighting system of major-league quality. Along with these fine facilities, the players were housed at the best resort in the city, the Hotel Nacional. These opulent quarters boasted beautiful swimming pools, fine restaurants, and the players were quartered with visiting diplomats and international businessmen. The Triple A Royals were housed at the Havana Military Academy, a prep school attended by the wealthy offspring of government employees. The black members of both squads, however, stayed at neither of these locations.

Robinson and the Royals’ other black players—Roy Campanella, Don Newcombe, and Roy Partlow— were taken instead to the Hotel Boston in “old” Havana. Jackie was irate. “I thought we left Florida … so we could get away from Jim Crow,” he complained to the Dodgers’ traveling secretary, Harold Parrott. “So what the devil is this business of segregating the Negro players in a colored nation?”4 Parrott explained to Robinson that the whole thing was Rickey’s idea. Though the Hotel Nacional was fully integrated, the Dodgers’ head man didn’t want to take the chance of any incidents while his team was staying there. “I’ll go along with Mr. Rickey’s judgment,” Jackie finally said. “He’s been right so far.”

Some have questioned whether Rickey was right in segregating the black players from the rest of the team, believing it was an overreaction. Where the team stayed, however, made no difference to a number of white Dodgers who were nonetheless offended by Robinson’s presence. Led by Dixie Walker, the de facto leader of the team, the group included Hugh Casey, Carl Furillo, and Bobby Bragan and it started a petition to keep Jackie off the club. During a trip to Panama for a three-game series against the Royals, Durocher, still the Dodgers’ manager, caught wind of the uprising and exploded.

“I told them what they could do with their petition, and I don’t think I got much back talk on it,” he said years later. “I told the players that Robinson was going to open the season with us come hell or high water, and if they didn’t like it they could leave now and we’d trade them or get rid of them some other way. Nobody moved.”5 Rickey confronted his mutinous players in his hotel room and reiterated that anybody that wanted to leave the team would be accommodated. The petition got no further. Though some tension undoubtedly remained into the regular season, there were no more internal flare-ups in Cuba.

While in Havana, the team played ”home” series against the Yankees and Boston Braves, along with games against the Royals and a team of Cuban all-stars. In addition to the trip to Panama, they took quick jaunts to play in Caracas, Venezuela, and the Panama Canal Zone, before finally breaking camp during the first week of April and heading home to Brooklyn.

The Havana experiment lasted only a single spring. The club’s training camp costs that year were reported as being the highest in the majors. Surprisingly, the fans in the baseball-hungry country didn’t show up in the numbers the Dodgers had expected. Attendance for their series against the Braves was so low that the visiting Boston club lost money on the deal, causing even the St. Louis Browns to cancel their upcoming trip. The prevailing thought may have been that the city, having just experienced the most pressurized pennant race in Cuban League history, had seen enough baseball for a while. But this was disproved later that spring when the All-American Girls Professional Baseball League, featuring the champion Racine Belles, arrived. Fifteen thousand fans showed up for that league’s first practice game in Havana. In the end, the Dodgers opted not to return in 1948, choosing the less expensive Dominican Republic as their spring-training site.

The Dodgers, by then located in Los Angeles, did return to Cuba one more time. When heavy Florida rains threatened a weekend set in 1959 against the Cincinnati Reds, the teams opted to move the series to Gran Stadium. It was the last time the team played there; that same year, Fidel Castro took power in Cuba, and baseball’s official dealings with the nation ended. Still, despite John McGraw’s warnings, that spring in Havana became a milestone in Dodgers history. The team may have lost a manager but gained a leader, Jackie Robinson, who subsequently changed the fate of their franchise, and baseball, forever.

IRV GOLDFARB saw his first baseball game at Yankee Stadium in 1962, but his first game at the Polo Grounds a year later made him a Mets fan for life. Irv was a disc jockey for 22 years in Buffalo, Hartford, and New Haven, Connecticut, and now works at ABC Television in New York. He lives in Union City, New Jersey, with his future wife, Mercedes, a more insane Mets fan than he is. Irv has had chapters published in both “Deadball Stars of the National League” and “Deadball Stars of the American League”; “The Fenway Project”; and “The Miracle Has Landed: The 1969 New York Mets.” He has been a SABR member since 1999.

“Cuban Baseball” by Bruce Brown from The Atlantic on-line, June 1984.

“The ’47 Dodgers on Havana:  Baseball at a Crossroads” by Roberto Gonzalez Echevarria from the 1996 issue of Spring Training.

“High Jinxes and High Hopes in Havana” from MovieTone News-1947.