This article was written by Bill Nowlin - Walter LeConte

This article was published in 1947 New York Yankees essays

The Yankees traveled to Florida for spring training in 1947 seeking their first American League pennant in four years. 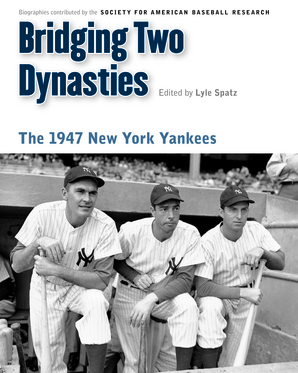 The spring of 1947 was one that saw the three New York area baseball clubs range far and wide geographically. The New York Giants held their spring training in faraway Phoenix, Arizona—the first major-league club to be based in Arizona. (The Cleveland Indians moved to Tucson that same spring.) The Brooklyn Dodgers ran their exhibition season out of Havana, Cuba. The Yankees were situated once again in their usual St. Petersburg, Florida home where, save for the war years, they’d trained since 1924—but they also played five games in Puerto Rico, six games in Venezuela, and three games in Cuba.

The Yankees weren’t looking for a new home so much as they were looking for a return to the top of the standings. The Yanks had only missed one pennant from 1936 through 1943, and in six of those seven seasons they’d won the World Series. But in 1944, 1945, and 1946, they’d come in third, fourth, and third again.

The ’47 Yankees had a new manager in Bucky Harris. Joe McCarthy’s remarkable run of fifteen-plus seasons at the helm had ended on May 23, 1946. Bill Dickey and Johnny Neun had skippered the team through the balance of the season, but Harris was in place at the start of spring training. His coaching staff consisted of Johnny Schulte, returning for his fourteenth season, and the newly-hired former Brooklyn Dodgers, Red Corriden and Chuck Dressen. To round out his staff, Frankie Crosetti, a Yankee since 1932, would serve for the first time as a player-coach.

The team faced a number of decisions at the start of training, with only four positions locked in place: shortstop (Phil Rizzuto), left field (Charlie Keller), right field (Tommy Henrich)and center field (Johnny Lindell, because Joe DiMaggio was out with a heel injury).

Harris had 20-game winner Spud Chandler, Bill Bevens, and Joe Page returning for another season, along with Allie Reynolds, acquired in a trade with the Indians. Rookies Spec Shea and Don Johnson were poised to challenge for places in the stating rotation.

Veteran first baseman George McQuinn had been released by the Athletics in January and signed by the Yankees. He took over for Nick Etten, whom the Yanks would sell to the Philadelphia Phillies the day before Opening Day.

Joe Gordon had been traded to the Indians for Reynolds, so second base again belonged to Snuffy Stirnweiss, who’d played the position in 1944 and 1945.

With the shift of Stirnweiss to second base, the competition for the third-base job was the most active one of the exhibition season. Rookie Bobby Brown and veteran Billy Johnson were pitted against each other for the position. Johnson got the nod from Bucky Harris just before the season opener.

Fifteen-year veteran Joe “Ducky” Medwick was released by the Brooklyn Dodgers in October, 1946 and signed by the Yankees later that December. Although he had an impressive spring, making the final roster cut, Medwick would never play a game with the Yankees and would finish his last two seasons of his phenomenal career with the St. Louis Cardinals.

In July 1946, Yankees president Larry MacPhail had announced his team would begin spring training in San Juan, Puerto Rico, starting on February 15. There were thirty-three players in the “Caribbean contingent,” although some rookies and invitees were left behind to work out under Crosetti in St. Petersburg. It wasn’t the first time the team had spent part of spring training outside the United States; in 1946, they’d spent a few days in Panama. The visit to Puerto Rico was sponsored by the Don Q distilleries.

The team flew the 1,600 miles from LaGuardia Airport in New York to San Juan, Puerto Rico in a chartered Constellation, arriving on Valentine’s Day. The first day of workouts saw a frustrated Harris threaten to leave the island, after a reported 3,000 Puerto Rican youngsters swarmed in the outer reaches of the outfield and made off with as many as five dozen balls hit out there. He didn’t blame the kids for acting like kids, but decried the lack of police protection.

After a week’s preparation, the Bronx Bombers played their first game on February 22 against the San Juan Senators, beating them handily, 16-3. The next day they took on Caguas in a 10:30 AM Sunday game and beat them, 6-5. Caguas was a team which the New York Times said was composed entirely of “Negro stars.” The third team to challenge the Yankees was Ponce, who bombarded the visitors, 12–8. The Yanks lost again the next day, the 25th, this time in twelve innings to a team of Puerto Rican All-Stars, 7–6. The biggest news of the day was that Joe DiMaggio, who’d been hobbling around on crutches following a bone spur operation on his heel, had to return to New York for further treatment. He missed all of spring training.

There was one more game in Puerto Rico, and the Yankees prevailed over the All-Stars, 8–6, thanks to a four-run outburst in the top of the ninth. The game scheduled for the 27th was rained out.

After flying to Caracas, Venezuela, the Yankees played on March 1 against the Vargas club and lost, 4–3, when Vargas scored twice in the bottom of the ninth. The major story of the day, however, was the jailing of two Vargas pitchers for refusing to pitch in the game. The two, Ed Chandler and George Brown, said they were under contract to Brooklyn and that Branch Rickey had ordered them not to play. The Yanks then ran off back-to-back wins. Ralph Houk’s ninth-inning hit broke a 4–4 tie against the Magallanes team, and on March 3 they defeated the Caracas All-Stars, 9–2.

There followed three games, all in Caracas, against the Brooklyn Dodgers and all played under lights. Some 10,000 spectators saw the Yankees win the first game, 17–6, and then fall, 8–7. The deciding game of the “Venezuelan Cup” went to the Yankees, 4–0. Both teams flew to Havana; for the Dodgers it was a return to their spring training home park at Gran Estadio de la Habana.

Three Brooklyn pitchers combined to no-hit the Yankees for nine innings, yielding one in the top of the tenth. The Dodgers got two of their five hits in the bottom of the tenth and won, 1–0. Four in the fourth gave the Yankees all they needed for a 4–1 win on March 9. When the Dodgers boarded a plane for the Panama Canal Zone on the 10th, MacPhail blasted them for walking out on the third game (which had indeed been listed in all the printed schedules and the program for the three days). The Yanks instead took on a team of Cuban All-Stars, and lost, 2–1.

Local teams from Puerto Rico, Venezuela, and Cuba had each won a game or two from the visitors, but the Yankees held an 8-6 edge in games played to this point. On March 12, the traveling team reunited with those under Crosetti’s charge in St. Petersburg and the brand-new Al Lang Field was opened with a game against the St. Louis Cardinals. The Yankees had played fourteen games on their Caribbean tour, with an 8-6 record (3-2 versus Brooklyn and 5-4 against various Caribbean clubs).

Before breaking camp, DiMaggio had a full workout on April 3 for the first time all spring and gave his teammates a show from the batting cage. On Spud Chandler’s first pitch, Joe whacked a towering shot, albeit foul. Because of his heel injury, DiMaggio would miss the first three regular season games before his first appearance, pinch hitting on April 19.

In early April, the Yankees beat the Class Double-A Atlanta Crackers in two games at Atlanta, and then beat the Class B Norfolk Tars in Virginia. In the first game at Atlanta, Yogi Berra was 5-for-6 with four runs scored and five RBIs in the 14–1 drubbing of the Crackers. In the April 7 contest at Norfolk, he was 3-for-6, with six runs batted in. His 450-foot home run over the center-field wall, gave him three round-trippers in two days. If there had been an award given to the top rookie in spring camp, Yogi would have won it hands down.

The next day, New York beat the Class Triple-A Orioles in Baltimore, 7–3, before ending with three games against the Dodgers, all at Ebbets Field, where they lost the first one and won the next two. In thirty-nine spring games, it was reported that the Yankees attendance was 265,130, an average of almost 6,800 per contest. Overall, the team came out of spring training in good shape to start the regular season.